Is there no end to the sadness coming out of the UK? First it was the news of the death of Willow, Her Majesty The Queen’s last royal corgi, earlier last week at the age of 14. Now comes sad news that Munin, the eldest of the resident ravens that watch over the Tower of London, has died at the age of 22. It was reported late last month in a short statement released by Historic Royal Palaces that Munin had passed away following a brief ‘age-related’ illness.

The tower’s ravenmaster Christ Skaife confirmed the sad news saying, “It is with great sadness that I can inform you that Munin, one of our Tower ravens, has passed away after a brief age related illness. At the age of 22 Munin was the oldest and longest serving of our ravens currently here at the Tower and she will be sorely missed.” 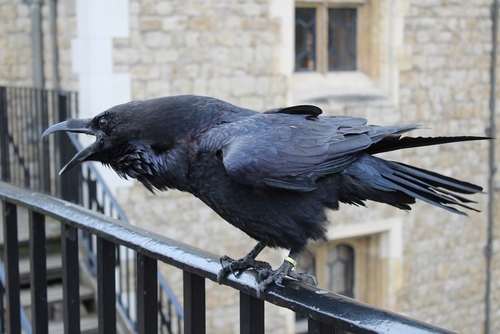 Born in 1955, Munin’s remains will live on in the raven graveyard, a small patch of earth in the south moat of the Tower of London which is reserved for the bones of its famous sentinels.

Ravens have lived at the tower for hundreds of years and, as legend has it, the fate of the Crown and the British Empire rests on their feathered heads. According to the superstition, there must always be six ravens present, plus one spare, and if they ever leave, the Crown will crumble and the British Empire will cease to exist. Thankfully, as of this writing, the British Empire is still standing but The Tower and its Yeoman Warders are maintaining a cautious silence.