Still reeling from having missed the opportunity the last couple of years to alert everyone as to the fact that National Towel Day is just around the corner, I thought I’d get a head start this year so everyone (me included) can plan the days activities for #TowelDay2018 on May 25. From Austria to the United States and all countries in-between, as most of you probably know, National Towel Day is the annual celebration of the life and works of the late English writer Douglas Adams. You see, it was Adams’ classic Hitchhiker’s Guide to the Galaxy, that alerted Planet Earth to that fact that a towel is one of the most useful items to carry with you around the universe. 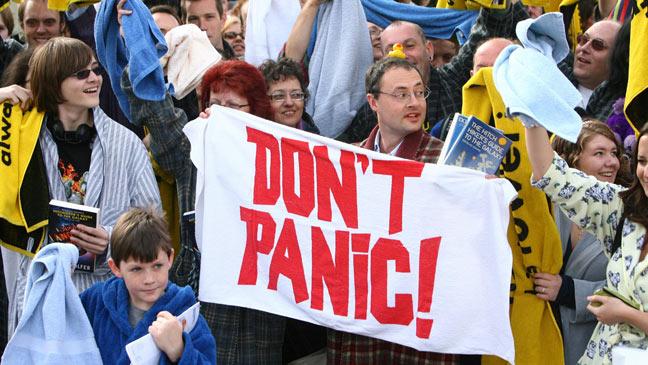 According to towelday.org, there are organized events in over 22 different countries around the world with festivals for froods everywhere.

With May 11 marking the 17th anniversary since the all-too-early passing of H2G2 creator/writer, Douglas Adams, this years festivities throughout the month of May will mark also the 17th anniversary of the first Towel Day which took place just two weeks after Adams passed away from a heart attack on May 11, 2001. It was considered to be a no-brainer way for fans to pay their respects. According to towelday.org, there are organized events around the world in different countries from Austria to Singapore to the United Kingdom and all points in-between with festivals for froods everywhere. If you’re considering a Towel Day Flashmob, check this out from the 2013 meet up in Dresden.

As if anyone needed any more proof that National Towel Day is where all the cool kids participate, check out European Space Agency astronaut Samantha Cristoforetti reading from Adams’ “The Hitchhiker’s Guide to the Galaxy” while aboard the European laboratory Columbus on the International Space Station several years ago.

And, finally, for those unfortunate few that find themselves Towel Day event challenged with nowhere to go, while you’ll have to have your Pangalactic gargle blaster all by yourself, there will be numerous ways to grab your towel and celebrate online with millions of your closest friends through Facebook events, etc.

Until May 25, so long and thanks for all the fish!