There’s something about British comedy over the course of time that makes you wonder how two people could ever hook-up much less cross paths. You know, those like Basil and Sybil Fawlty who are constantly at each others throats. But, you also get the sense that neither of them would survive without the other. The same could be said (maybe) for Tim and Gareth in the BBC version of The Office, Hyacinth and Richard Bucket in Keeping Up Appearances and, now, in Mackenzie Crook’s brilliant series, Detectorists, Andy and Lance, two ‘detectorists’ (practitioners of the detector) who bicker constantly and re-tell the same jokes over and over.

Whatever has brought them together, it works and it’s brilliant as, for the second time in their three-series history, Detectorists has unearthed a BAFTA award, this time for Toby Jones for Best Male Performance in a Comedy Program. The series won a 2015 BAFTA for Best Television Scripted Comedy. All 3 series of the Detectorists aired on BBC4 in the UK and can be seen currently on public television stations in America. 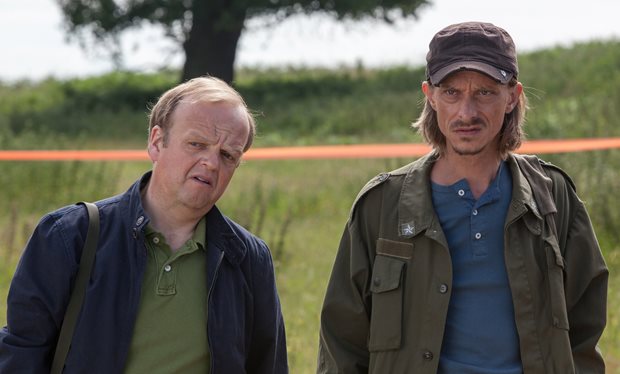 While Andy and Lance’s friendship could be described as both pathetic and touching, their goal in life as ‘detectorists’ is to find much more than scraps of metal in the ground. As members in good standing of the Danebury Metal Detecting Club (DMDC), Andy and Lance are looking for something to ignite and improve the drudgery of life, believing that any day, this could be their ‘moment’. Their dream is to unearth a Saxon ship burial, their reality is digging up ring pulls from old Fanta cans.

Along for the three series ride with Mackenzie Crook’s Andy and his best friend, Lance, brilliantly played by Toby Jones, are Aimee-Ffion Edwards as Sophie, Pearce Quigley as the lugubrious Russell and Gerald Horan as chairman Terry. You might remember the 2015 Christmas Special in which Andy decided to travel to Africa with his wife Becky (Rachel Stirling) and son Stan, leaving his future with the DMDC uncertain. Lance also made a stunning find that ended up in the British Museum.

Detectorists is created by, written by and stars Mackenzie Crook, who knows more than his fair share about pathetic and touching friendships from his days as Gareth Keenan in Ricky Gervais’ The Office. Some groups have objected to the original series with the Detectorists being on the wrong side of their share of protests and Crook feels very strongly otherwise. “It’s a very affectionate look at men and their pastimes,” says Crook. “It’s not a flippant look at metal detecting. And hopefully, the metal detecting community will really embrace it and enjoy it.”

For the third and final series, Crook said: “After a year away, I decided I missed my friends in Danebury so much, that I have to go back to the world of Detectorists one more time to see what Andy and Lance can dig up. The prospect of filming another summer in the beautiful English countryside is a good one, and I’m very proud that the third series.”

Watch all three series (plus the holiday special) of The Detectorists on a number of local public television stations. It’s definitely worth the time spent viewing!