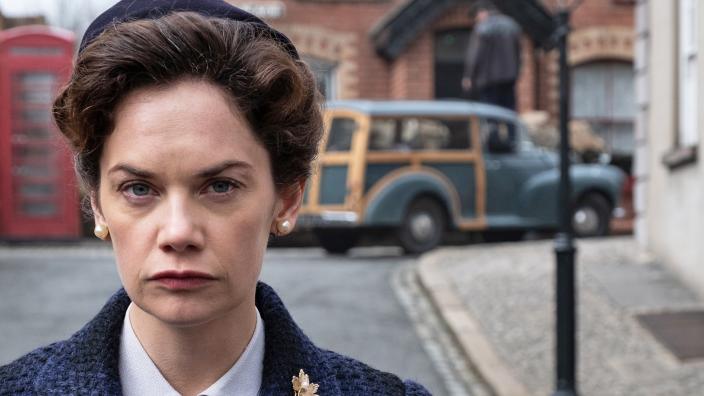 Golden Globe-winning actress Ruth Wilson, best known for her brilliant portrayal as research scientist/highly intelligent sociopath Alice Morgan in the psychological drama, Luther, returns to PBS Masterpiece in a very personal sort of three-part drama, one based on her own grandmother’s memoir about her life and their complicated family history.

Wilson was last seen on Masterpiece over a decade ago in the title role of Jane Eyre in the 2007 adaptation of Jane Eyre starring alongside Toby Stephens, who played Edward Fairfax Rochester. Most recently, Stephens, the younger son of Dame Maggie Smith and Sir Robert Stephens, could be seen as John Robinson in the 2018 TV adaptation of the 60s sci-fi classic, Lost in Space.

Set in 1940s and 1960s London and 1930s India, Mrs. Wilson follows Alison Wilson, who thinks she is happily married until her husband, Alec, dies and a woman turns up on the doorstep claiming that she is the real Mrs. Wilson. Alison is determined to prove the validity of her own marriage and Alec’s love for her but is instead led into a world of disturbing secrets.

“I am so excited to bring to the small screen the extraordinary lives of my grandparents,” said Wilson. “Theirs is a profoundly moving story and MASTERPIECE on PBS is the perfect home for it.”

Starring alongside Wilson will be Game of Thrones/Downton Abbey star Iain Glen, who will play Alec, the husband who was also a spy and secret service officer during World War I, who moved to India, became a professor and wrote several spy novels. Boy, you think you know someone. Keeley Hawes (Spooks, Upstairs Downstairs, Line of Duty, The Durrells in Corfu) will play Dorothy, one of the other women in Alex’s life.

Filming began back in April in Northern Ireland and London but no word as of yet as to when it will transmit on BBC and PBS.