This may be an old story, but that’s the beauty of the Internets, great old stories live on forever. In November 2005, as reported in Atlas Obscura, John Cleese, best known as a co-founder of sketch comedy group Monty Python, went on tour in New Zealand. Overall, his time in the country was mostly positive, calling Invercargill “delightful,” described Christchurch as “a very nice town,” and Wellington as “sophisticated, fun and lively.”

Palmerston North, however, not to much. A few months after visiting this city in the North Island of New Zealand, Cleese was clearly not impressed as, during a podcast, he summed up his visit by saying, “We stayed in a little motel, the weather was grotty, the theatre was a nasty shape and the audience was very strange to play to.” He concluded by saying that he had a “thoroughly bloody miserable time” in the city.

While the initial reaction to Mr. Cleese’s seemed to be fairly good humored with the then mayor of Palmerston North, Heather Tanguay, suggesting the Monty Python star “may need some more medication,” referring to the name of his tour, ‘My Life, Time and Current Medical Problems’, New Zealand comedian John Clarke suggested renaming the local Awapuni Landfill in honor of Mr. Cleese. Fast forwarding two years after Cleese’s famed visit, Palmerston North officially returned the favor as the rubbish dump was named in honor of the British comedian.

While Mt. Cleese is probably not on a majority of Planet Earth’s climbing bucket list, one person who certainly has gotten his share of joy out of Mt. Cleese was fellow Python and long-term friend Eric Idle. In true Python fashion, Idle visited Mt. Cleese in March 2016 and posted a photo of himself with the Mt. Cleese sign on Twitter. “I summited without oxygen,” he wrote, clearly approving of the tribute to his friend. 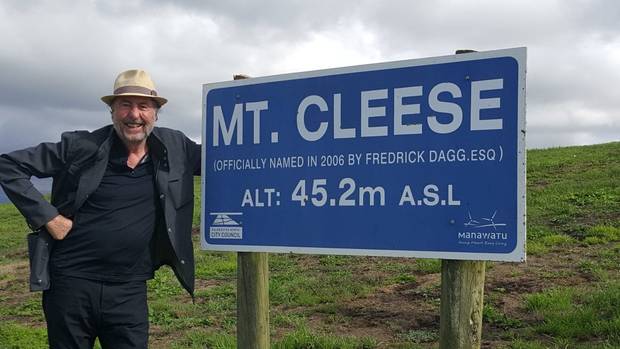 All is well as the greatness of John Cleese and Eric Idle did return to New Zealand in March of 2016 to play shows in Auckland and Wellington (not Palmerston North, however) for their John Cleese & Eric Idle: Together Again At Last … For The Very First Time tour.

Should you have this burning desire to take life into your own hands and head to Palmerston North, NZ and attempt to climb Mt. Cleese, remember, there are some things that should be left to professionals. Do not try this at home.