Fasten your seat belts and grab a box of tissues as the third and final series of The Tunnel: Vengeance begins Sunday evening on PBS at 10:30pET / 9:30pCT. Tellspotting had the great good fortune to sit down recently with the wonderfully brilliant Emilia di Girolamo, showrunner and lead writer for the gripping finale of The Tunnel trilogy to discuss her vision for the series, her approach to the series finale and to give American audiences a bit of a glimpse as to what lies ahead for Karl and Elise as we enter into the final series.

Tellyspotting: You served as the showrunner for The Tunnel: Vengeance in addition to writing three of the episodes. Did you find it more difficult or easier to attach your efforts and talents to a series that had already well-established characters in Elise and Karl?

Emilia di Girolamo: It was an absolute gift to start out with established characters as brilliantly compelling as Elise and Karl. It gave me the freedom to really focus on creating a story that would play into their strengths, flaws, history and relationship and give them a final series fitting of their unique friendship. 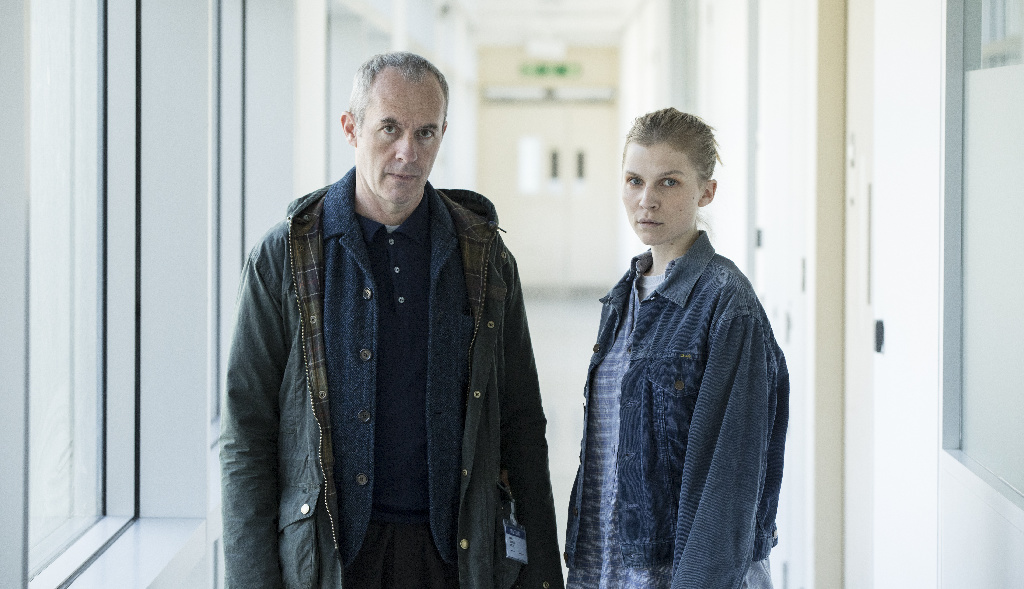 TS: The Tunnel has been a 50/50 co-pro between French and British crew which, obviously, is not the norm.  What were the challenges and/or advantages to this type of arrangement? If I may ask, how difficult will a co-pro arrangement of this nature be in the future given the Brexit vote last year?

Emilia: We’ve been blessed to work with incredible French talent and so much of The Tunnel’s brilliance lies in the relationship between British and French cast and crew. Unlike the challenges Karl and Elise face working together, it has never felt like a challenge but rather an enriching experience that has benefitted every aspect of the production. I think The Tunnel is a shining example of ‘better together’! Sadly, I suspect if Brexit goes ahead as planned it will make working the way we did on The Tunnel incredibly difficult.

Emilia: Elise is the most wonderfully complex and intriguing character and brilliantly portrayed by the huge talent that is Clemence Poesy. Series 3 sees Elise obsess with resolving mistakes she made in the past. She goes on a huge journey across the three series, from someone who really sees life quite simplistically and unemotionally, never fully connecting with other human beings to a woman who truly understands the meaning of friendship. I won’t spoiler the ending but it’s a hell of a ride for Elise.

TS: Especially in the first episode of ‘Vengeance’, imagery plays a much bigger role right from the beginning. There’s no ‘body’ per se that brings Karl and Elise together once again which is different than in the first two series. Was this by design and, if so, what was your vision as you approached the third and final series?

Emilia: It’s absolutely by design. The Tunnel is notoriously gory with a high body count and I love a challenge so what better challenge than an opening episode where no one dies! But to make that work it still needed plenty of meat. The meat of Vengeance is emotion (and maybe a touch of human meat Sweeney Todd style!) I wanted to bring the show back from the complex geopolitics of Sabotage to something more human-sized, personal and emotional firmly rooted in the socio-political dynamics of Europe.

It would have been impossible for me to run a show about British French relations and ignore the huge crisis unfolding on both our shores. The papers were filled with the devastating images of a three-year-old Syrian boy found drowned on a Turkish Beach trying to flee Syria. We were bombarded by images of the Calais camps, riddled with disease and violence. There were reports of dinghies sinking, hundreds of refugees drowning.  Desperate families were risking their lives to reach us hoping for compassion, a caring Europe to nurture and protect them after the hell of war. Instead, if they were lucky enough to escape death they got the camps and a barrage of hatred. All of this was happening just yards from Eurotunnel itself.

Worse still, as we sat down to writersroom there were statistics surfacing – ten thousand refugee children missing in Europe. No one knew where they were or what had happened to them and very few people seemed to care. It broke my heart to think the human race has come to a point where compassion seems to be dead for the majority. Both my parents were immigrants who came to the UK, in my mother’s case, an Anglo-Indian escaping the violence of India at partition and in my father’s case, escaping the poverty of post war Italy to join his POW step-father. They made this country a home, worked hard, contributed and were afforded opportunities. You would think seventy years on we would be even more evolved, more tolerant, more welcoming but it feels as if we’ve gone backwards.

You have all this now with the horror happening at your borders and the inhumane incarceration of children. Nelson Mandela wisely said, “There can be no keener revelation of a society’s soul than the way in which it treats its children”, and I firmly believe he was right.  All children should be treated equally. We have to have these conversations and drama is a good place to have them. Who knows, maybe the audience will see this series with the horror of a mother separated from her child, not knowing whether they are alive or dead, and maybe it will make them feel a glimmer of compassion and question policies. I really hope so.

TS: As a writer and show runner, what advantages are you afforded by knowing going into developing a series that it’s the final series? Does knowing that you have the option to ‘tie up loose ends’ hinder your thought process or does it give you an end to work backwards from?

Emilia: I knew from the start it would be the final series as it was always intended as a trilogy and that gave me a huge freedom to take the characters on the most satisfying journey for them without worrying about hooking into a new series. Karl and Elise’s friendship is so special, I wanted to offer a finality to it and give the series and their unique friendship the proper closure it deserved.

I made a decision early on to put their friendship at the very heart of Vengeance and to really test it to its limits. This series was never going to be about further exploring Elise’s sexuality or Karl’s cheating or broken marriage but absolutely heart and soul about these two people who found something so rare in the other, a platonic friendship that could endure anything.

TS: When approaching a final series, do you have in mind how you want it to end first or does it play out as you begin looking at the overall series from the beginning?

Emilia: I started with a very clear vision to tell the story of the missing refugee children and I wanted to explore the concept of folie a deux. I’m fascinated by the thought of what two damaged people will do together that they would never do apart. Bringing together the broken mother of a lost child and the loneliest man in the world felt like a great place to start a story.

I worked on developing those stories alone at first and then in the room with my brilliant writers Louise Ironside, Jamie Crichton and John Jackson. The end really came about organically from the story development as the most logical, emotional and satisfying place to go. I won’t spoiler it here but we can talk about THAT ENDING when it’s aired on PBS!

TS: Much like the Devon coastline with all its beauty might be considered a supporting cast member of Poldark, the same could be said for the Channel Tunnel. What was the role of Euro Tunnel considering the real-life demands of their everyday operation?

Emilia: The Channel Tunnel and the surrounding bleak beauty of the Kent coastline are absolutely supporting characters and I had a very clear vision regarding specific locations we used this series. In the final episode there’s a huge set piece at Samphire Hoe. I wanted that fairytale Pied Piper hillside tunnel and we were very lucky to be able to find exactly that.

Eurotunnel were a huge part of the process and actually made our lives very easy both in terms of their role in early story development and research and in practical terms enabling us to film in their locations and even providing real Euro Tunnel staff to work as background artists but there were definitely some raised eyebrows when I asked if I could flood the tunnel with thousands of rats!

TS: What can U.S. viewers expect from The Tunnel: Vengeance as we enter the final series on Sunday evening?

Emilia: Like previous series, Vengeance is a thrilling ride of a crime show, baroque, darkly humorous beset by a rollercoaster ride of twists and turns but I’ve definitely given it my spin. Having worked closely with offenders in prison for 8 years before I was a writer, the psychological truth behind offending behaviour is crucial to my writing and I wanted to give Vengeance a brilliantly engaging story that felt absolutely rooted in psychological truth. What makes my series different to previous series? In one word, emotion. I challenge you to get to the finale without shedding a tear or two so have those Kleenex at the ready!