Victoria writer/creator Daisy Goodwin is expected to turn her attention to the royal bedroom in series 3 exploring the tensions between Jenna Coleman’s Queen and Tom Hughes’ Albert as the Queen becomes increasingly resentful of the fact that her husband is constantly making her pregnant. Goodwin has revealed that she is planning to depict suggestions that the Queen may have withheld sex from her spouse in order to avoid constantly finding herself pregnant. 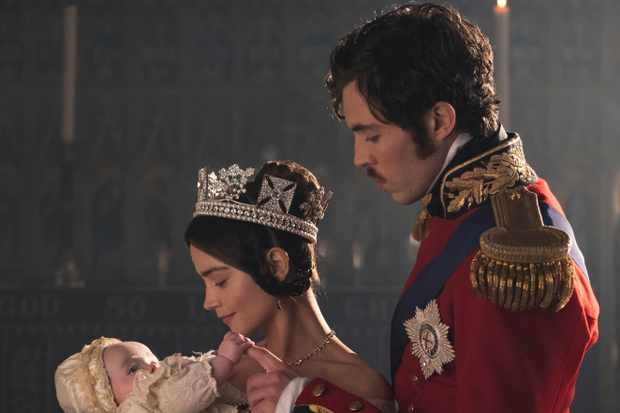 “She has had six children in eight years – which is a lot – and there are some gaps, so I wonder whether there may have been some withholding [of sex] on both sides; that’s certainly something I’m going to explore in series three,” Goodwin revealed. In the final shot of series two the couple had three children. In total, the Queen had nine children over a 17-year period.

Set in 1848, series 3 takes place in a “turbulent and uncertain time” for Queen Victoria and her husband Prince Albert, according to producers. Outside the royal bedroom, Victoria is under pressure from the government to leave London for her own safety, amid fears of revolution and unrest in London.

As we reported recently, series 3 will see a lot of new faces alongside Jenna Coleman (Queen Victoria) and Tom Hughes (Prince Albert). Laurence Fox, best known as DS James Hathaway in Lewis, has joined the cast of Victoria starring as the “charismatic and wayward” Foreign Secretary Lord Palmerston.

Turbulent and uncertain times aside, Goodwin would not disclose at what point Hughes’ Prince Albert, who died in 1861, will expire in the drama. “I don’t know whether this is going to be the series when Albert dies,” added the writer. “I haven’t written it yet. I can tell you there will be drama and intrigue and revolutions in Europe. It starts in 1848, which was a very exciting time with revolutions in Europe.”

Victoria S3 will premiere in January 2019 on PBS.