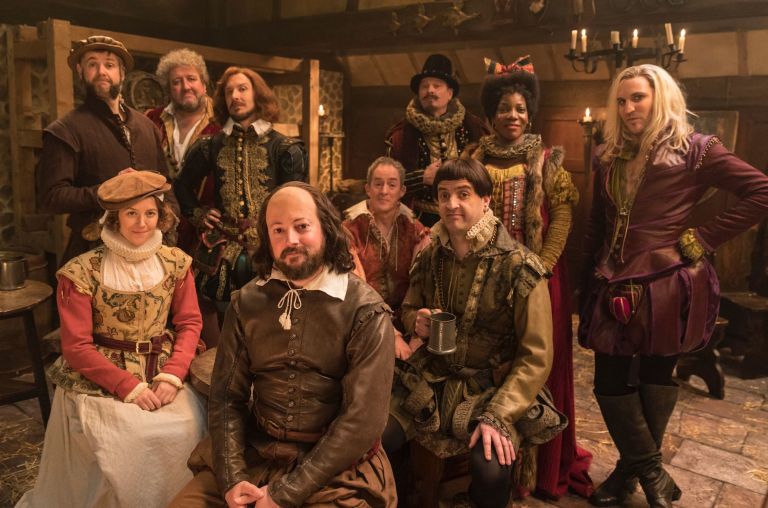 David Mitchell returns in the main role of William Shakespeare when the third series of the Ben Elton comedy Upstart Crow begins Wednesday, August 29 at 8.30pm on BBC Two. This time around we’ll see busy at work and home as he struggles to juggle his roles as father, husband, commuter and literary genius. Series 3 will also see Shakespeare put on the first ever performance of Julius Caesar, as well as the world’s first charity fundraising benefit as he continues to try and make it as a playwright in London while managing that pesky family life with his loved ones in nearby Stratford-upon-Avon.

To quickly catch everyone up before S3 begins, the first series followed the writing and preparation to stage Romeo and Juliet after The Bard gained some early career notoriety for his poetry, Henry VI and Richard III. Series 2 finds Romeo and Juliet finally finished but in need of a cast while Shakespeare puts the finishing touches on The Two Gentlemen of Verona.

For series 3, Harry Enfield, Paula Wilcox, Liza Tarbuck, Helen Monks and Gemma Whelan return alongside Mitchell, known to audiences for his 10+ years starring with long-time comedy partner, David Webb, on The Peep Show, which ran for 9 series (54 episodes) from 2003-2015. Series 3 will see a bit of added pressure for Shakespeare when real-life Shakespearean legend, Sir Kenneth Branagh, stars as a ‘mysterious stranger’ in an upcoming episode.

Upstart Crow S3 returns to BBC2 on Wednesday, August 29 at 8:30p. The first two series are currently airing on many public television stations in the U.S. with series 3 forthcoming in early 2019.