And Now for Something Completely Different. New signage near the plaza and in sight of the historic courthouse in Sulphur Springs, Texas, has residents and tourists alike walking a bit differently these days. A pair of traffic signs feature the silhouette of a high-stepping, bowler-wearing John Cleese figure doing a silly walk at the corner of Main and Gilmer. The classic 1970s ‘Ministry of Silly Walks’ sketch from Monty Python’s Flying Circus, featured Cleese as a civil servant employed by a fictitious British government ministry responsible for developing silly walks through grants.

In 2014, a traffic sign popped up near an Ørje crosswalk and got the entire town cheering. Reidar Johannes Søby and Ruth Ingeborg Vaaler Thorvaldsen were inspired by a Monty Python-poster at work, and thought it would be fun to make a real sign encouraging people to cross the street John Cleese-style. The sign featured an illustration inspired by the classic 70s Monty Python/John Cleese sketch, “The Ministry of Silly Walks,” and was installed by Swedish art collective, Kreativiteket.

From the beginning, the crossing encouraged people to use their imagination, walk silly and make time for a little bit of mischief in their everyday routine. No surprise to anyone, the installation caused a positive stir in the community. According to the members of Kreativiteket, locals were sharing photos of the sign on social media and filming each other. Even the town’s drivers got on board with the initiative.

Sadly, in some eyes, the city of Ørje sign was a violation of the Road Traffic Act and, therefore, was scheduled to be eliminated. Road authorities, mainly the Norwegian Public Roads Administration, were not amused by the sign. One of its representatives told Norwegian news organization NRK that it’s illegal to use artistic signs that can be easily confused with public signs. Local Ørje officials, i.e. The Mayor, suggested that the NPRA should buy more of these ‘silly walk’ signs and spread them across the country insisting that “…this kind of fun should be allowed.”

Fast forward to Sulphur Springs and meet City Manager, Marc Maxwell. He says it was Shane Shepard, then community development director in the small Northeast Texas town, who showed him a video clip of a crosswalk where a sign was inspiring people to do their own silly walking. Maxwell said — ‘let’s do that here‘. “I sent the video to the public works director and said, ‘Install these signs,‘ and the next thing I knew, they were in,” Maxwell said in a phone interview. Let’s hope Sulphur Springs has a ‘leg up’ on their Norwegian counterpart and the signs stay.

Aside from Ørje and Sulphur Springs, the sign has popped up recently on Sparks St in Ottawa and in Manitou Springs, CO. 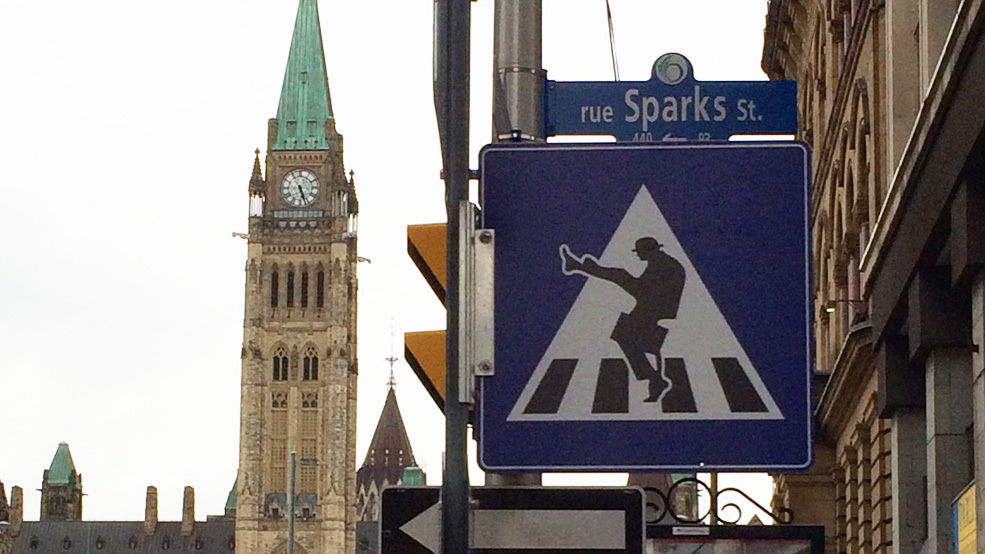 Perhaps the individual who is most amused so far is Michael Palin, who appeared in the original sketch opposite Cleese. When told about the new signage in Sulphur Springs, Palin said via email through a publicist, “I knew John Cleese would become a road sign one day, the way his career was going.“