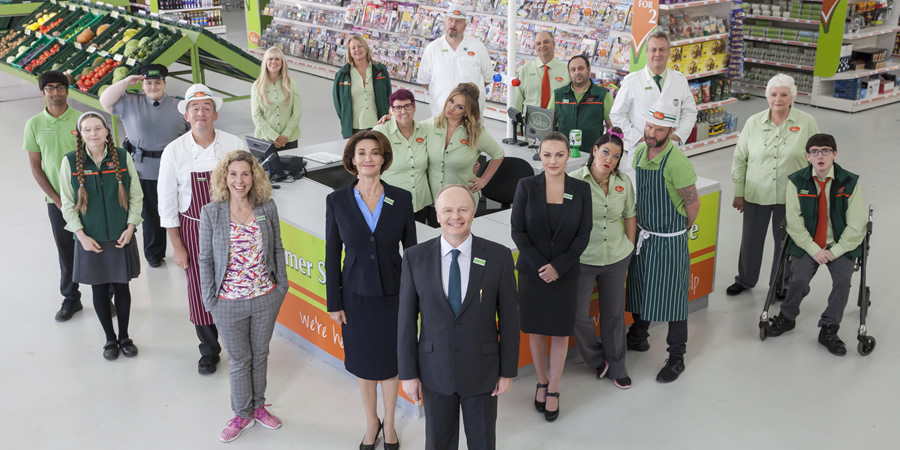 Not only has Valco survived the normal staff turnover that one would associate with a supermarket, they were able to survive Top Gear‘s Supermarket Sweep in Hatchbacks a few years back when then series hosts Jeremy Clarkson, Richard Hammond and James May drove their 1980’s hatchbacks around a specially designed course in the aisles of a supermarket, to see who can get round the quickest. It was Clarkson who took a Ford Fiesta on a collision course with a very persistent Corvette through the aisles of ‘Valco’.

Filmed at a full-sized fake supermarket located at The Bottle Yard Studios in Bristol, Trollied also saw a number or high-caliber guest stars walking the aisles of Valco including Richard Wilson (One Foot in the Grave‘s Victor Meldrew), Miriam Margolyes (Harry Potter‘s Professor Sprout) and Andrew Flintoff, Geri Halliwell, Lousie Redknapp and Carol Vorderman all having played themselves.

Hopefully, some of the original cast will reprise their roles for the Christmas special, which would mean audiences could see the return of Jane Horrocks (Absolutely Fabulous), who played Valco assistant manager Julie Cook, Game of Thrones star Mark Addy as store butcher Andy Richmond, or Stephanie Beacham (Lorraine Chain).

Valco will ‘serve you right’ one final time this Christmas on Sky One when Trollied returns with an hour special.