A Place to Call Home, Australia’s most-loved drama series, a longtime staple of public television station schedules and currently available exclusively on streaming service, Acorn TV, is coming to an end after 6 series. Unfortunately, it’s a day that we all knew was going to come someday but, in the back of our minds, one that we all thought wouldn’t if we didn’t happen to mention it. Tellyspotting had the great good fortune to sit down recently for a brilliant chat with Sara Wiseman and Craig Hall, a.k.a. Carolyn Bligh and Dr. Jack Duncan, to get a sense what the series has meant to them and to, hopefully, find out what’s in store for the residents of Ash Park and the fictional nearby town of Inverness as they both took a moment to look back on the series before we begin to tearfully say goodbye. Since public television audiences in America have yet to broadcast series 5, we tried to keep the spoiler alerts to a minimum. 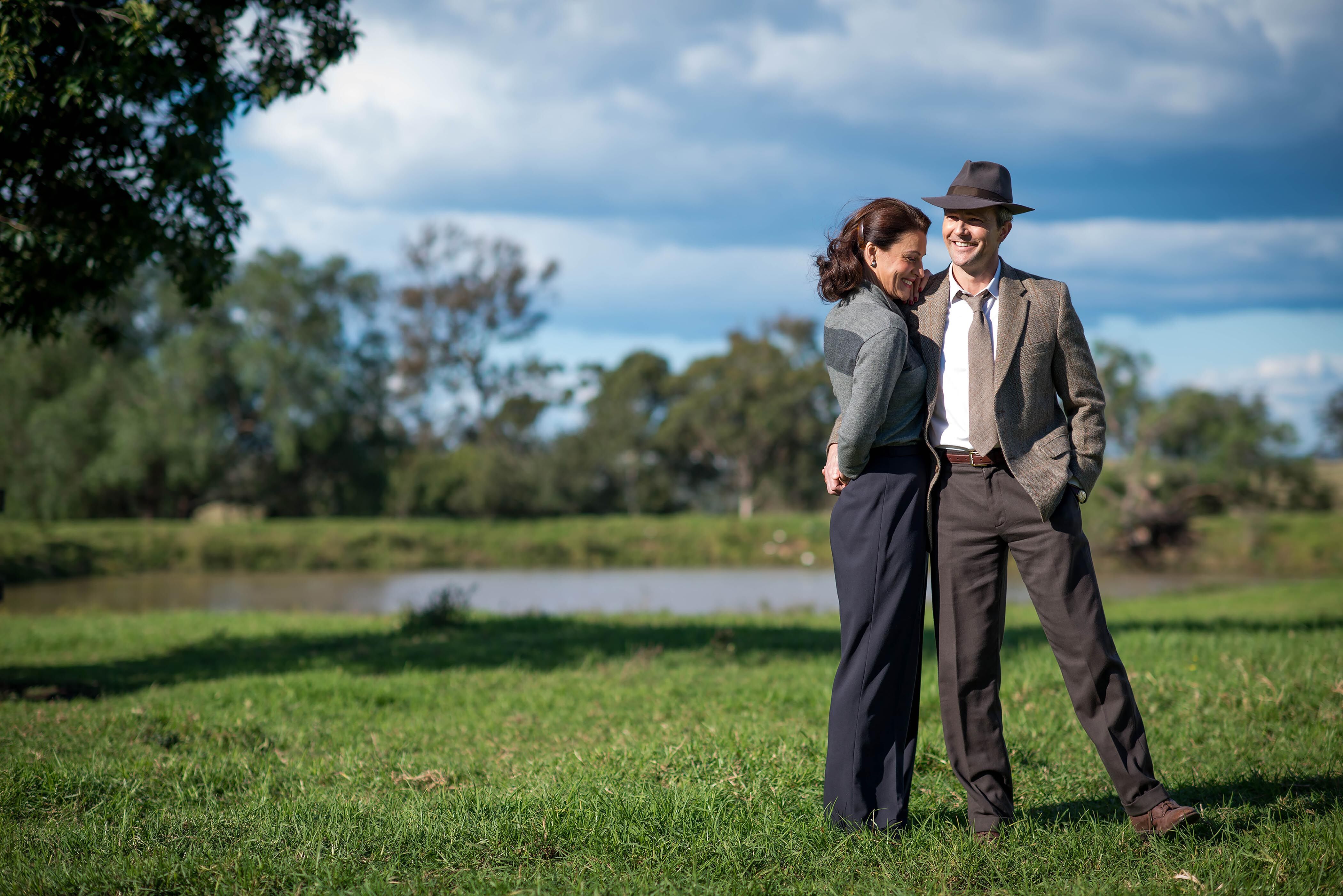 Tellyspotting: When you think of the overall series of A Place to Call Home, obviously the character that Marta Dusseldorp play, Sarah Adams is very strong from the beginning but so is your character, Carolyn Bligh. She is a very strong woman, especially for the 1950s. Do you see the role of Carolyn as a possible role model for young women watching the series?

Sara Wiseman (Carolyn Bligh): Absolutely, she is. It’s interesting that we always term the females as strong and I kind of battle with that sometimes. But, I guess you’re right, for that era she was above and beyond the terms of what would be considered acceptable and traditional in the woman’s role. She very much fits outside that box and walks to her own beat. She’s actually introduced as the black sheep of the family for circumstances that she goes through. She’s a survivalist. She’s a bit of a worrier. She honors her values, values that were very avant-garde for the times. She’s kind of like a feminist before there was such a term back in that era.

Tellyspotting: Looking at the first 5 series given that series 6 is just getting ready to premiere in the States, it could be said that there is more drama in this series overall than the law should ever allow. Was there a particular moment over the course of the series that you could point to which because difficult for you to ‘shake loose of’ at the end of the day as you were filming things?

Sara: I think there were two pivotal points. One being in series three where, as we’ve discussed, she is very progressive, independent woman who was very confident. When she’s assaulted by her boss in a very horrific way, everything gets swept out from underneath her. To be myself an independent person to work through and explore what she went through and honor the women that have gone through such horrific experiences it was really important to me that I encapsulated that as truthfully and authentically as I could. So that one stayed with me until the end of the season until we wrapped up and then I could kind of let it go. There was a big cry at the end of that one.

The other one that was even the opposite was in season five where Carolyn becomes quite domestic and house ridden in terms of she manages the house, she manages the family affairs, she’s thrown herself at everyone else and making sure they are ok. She’s kind of lost her own sense of self and where she fits in the world. That was really interesting to explore someone that had basically given up on her own forward momentum. It was quite challenging and frustrating to think of how many women do sacrifice their own lives for their partners or for their families because that suddenly becomes the priority. So that became interesting to explore as well.

Tellyspotting: The 50s, in which the series is set, is obviously challenging, Craig, for your character Jack Duncan on both a personal and professional level whereas Carolyn is, as mentioned earlier, ahead of her time. What does Carolyn mean to Jack and Jack to Carolyn?

Craig Hall (Jack Duncan): In the beginning, they had been together a lot earlier and then split apart. When Carolyn first came back in to his life, there was a lot of reminders of the heartache of the breakup. Once they got together or, rather, back together, and he was able to share his secret with her, Carolyn became his biggest ‘rock’ or his ‘safe place’. Going into subsequent seasons and, especially, season 6, then that starts to shake. His whole world sort of splits apart. Carolyn means everything to Jack.

Sara: For Carolyn, there is that anchor with what Bevan has been able to create with two characters that sit on two ends of the spectrum. They’re kind of ‘chalk and cheese’ which is kind of a down under term where they are not two people you would automatically put together. I love the deep sense of love, faith and history that they have has allowed them to really support and honor each other for what they are…despite the friction that can come with that. I think in the final season coming up, that really gets addressed in terms of the country boy and the city girl. I think they’ve done a wonderful job with that in the final chapter. 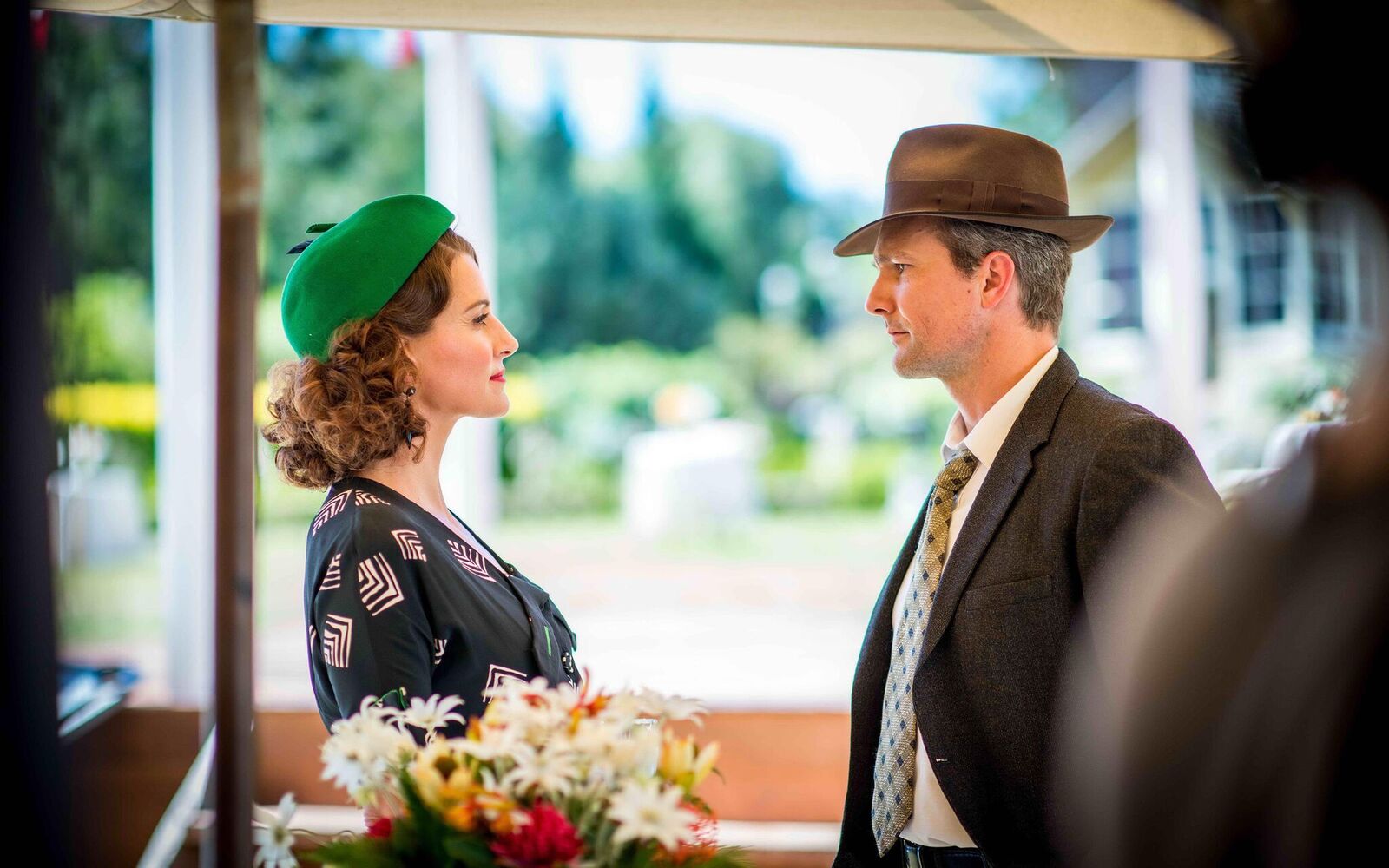 Tellyspotting: Season 6 is the final chapter of this brilliant journey created by Bevan Lee. It has to be gratifying to get to a season 6 especially not knowing after season 2 whether you would have another season after such a short time.  For both of you as actors in a series, does it in an odd way give you closure to a character that you have played for so long knowing that it’s the final season?

Sara: I think that was the great thing that they did when we began our pre-production for the final season is they announced that to us and they were going to announce this to the fans that this would be the final one. That gave us a lot of freedom to share it with people around the world and take them on that journey. It’s the longest running character that we’ve both played and to have finally closed it was very bittersweet. We both love who they are, with what they’ve experienced and with their very poignant sort of closure having the gratitude and the joy of being able to play someone so unique and complex and interesting and sort of send it up with best wishes.

Craig: This final season was very satisfying in terms of what you could hope for for our respective characters and I think it will be very satisfying for the audience to see. The way that Bevan has constructed the final hurrah really brings all of those deep seeded issues each character has to the forefront and they either work through them or not. I think the audience will be incredibly satisfied. 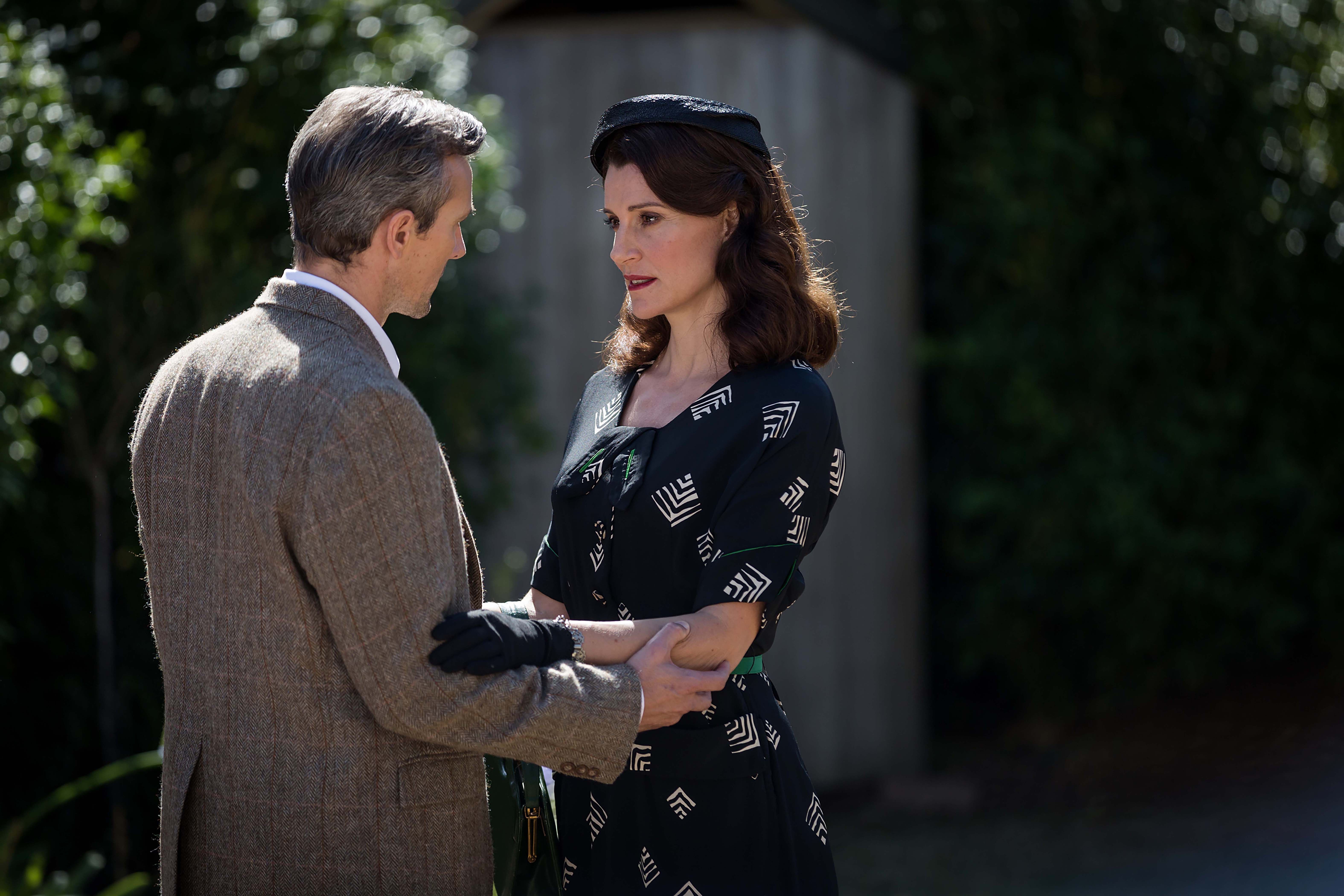 Tellyspotting: One of the things that I thought was very interesting through the entire series is that it has been very true to the times of the 50’s. You go through a period of time of James’ treatment, you go through Carolyn giving up Anna. Could you speak to the importance of the aspect of the storylines and how they closely followed the 50’s as they do.

Sara: The amount of research that Bevan and the script producer did is extraordinary. It’s so reflective of Australia in that post-World War II era but also deeply reflective of what the world was going through with those huge universal themes around bigotry, ignorance and gender issues, the feminist issues of the time. I think being able to explore them in a very generous way and not necessarily smack people over the head with them. It’s basically just ‘take a look at this and see where you fit in this world and have we actually moved on or not. In some areas we have and some we haven’t. It’s a wonderful parallel and it’s good to reflect on our own time at the moment and to see how far we’ve come or haven’t.

Craig: When you’d go into a new block, and you’d have a lot of Australian culture or politics reflected in the episodes, Bevan certainly based a lot of it on those circumstances and how that affected people at the time. That whole post-war time into the 50’s where people came out the other side and there was a sense of “we can make our lives better”. There was a sense of hope that creates a sort of idealistic sense of the 50’s that we had in retrospect sitting underneath all that damage that the war created. It makes quite a dynamic drama on both ends of the scale with the sense of change and hope but also all the damage that sits underneath.

Tellyspotting: In looking at the overall series, ‘story’ is so much a part of it whereas I think we’ve lost the importance of story in drama these days. That’s what has made the series what it is. The writing has been phenomenal.

Sara: That’s very astute. Bevan is a master at that. This one is very special to him. It’s the biggest one he’s ever tackled and the amount of passion, commitment and dedication he has poured into every script, it’s clear it goes beyond just a job for him. It’s important to us that we treat it in the same way and I think you can see that and feel that coming off the screen.

Tellyspotting: With the caveat of America just now getting the opportunity to begin the final chapter of A Place to Call Home with the 6th and final season, is there one thing without divulging too much that we can look forward to as Ash Park closes it’s doors for the final time?

Craig:  Series 6 is very strong. Thematically, it explores what the entirety of the show means for all of the characters. Not just geographically but what they need to deal with to come back to a place where they can be who they really are and embrace that. Bevan has thought of that in a very satisfying way. I think the audience can look forward to a heck of a journey and a real sense of closure.

Sara: It’s been my favorite season and we’ve had some extraordinary season previous to work on but I think the balance of the journey is so beautifully crafted with all the characters and, personally, the journey that Carolyn goes on is the biggest one yet and deeply satisfying to find ‘where is her place to call home’. Where does she actually fit in the world that she’s been struggling with through all the other seasons. 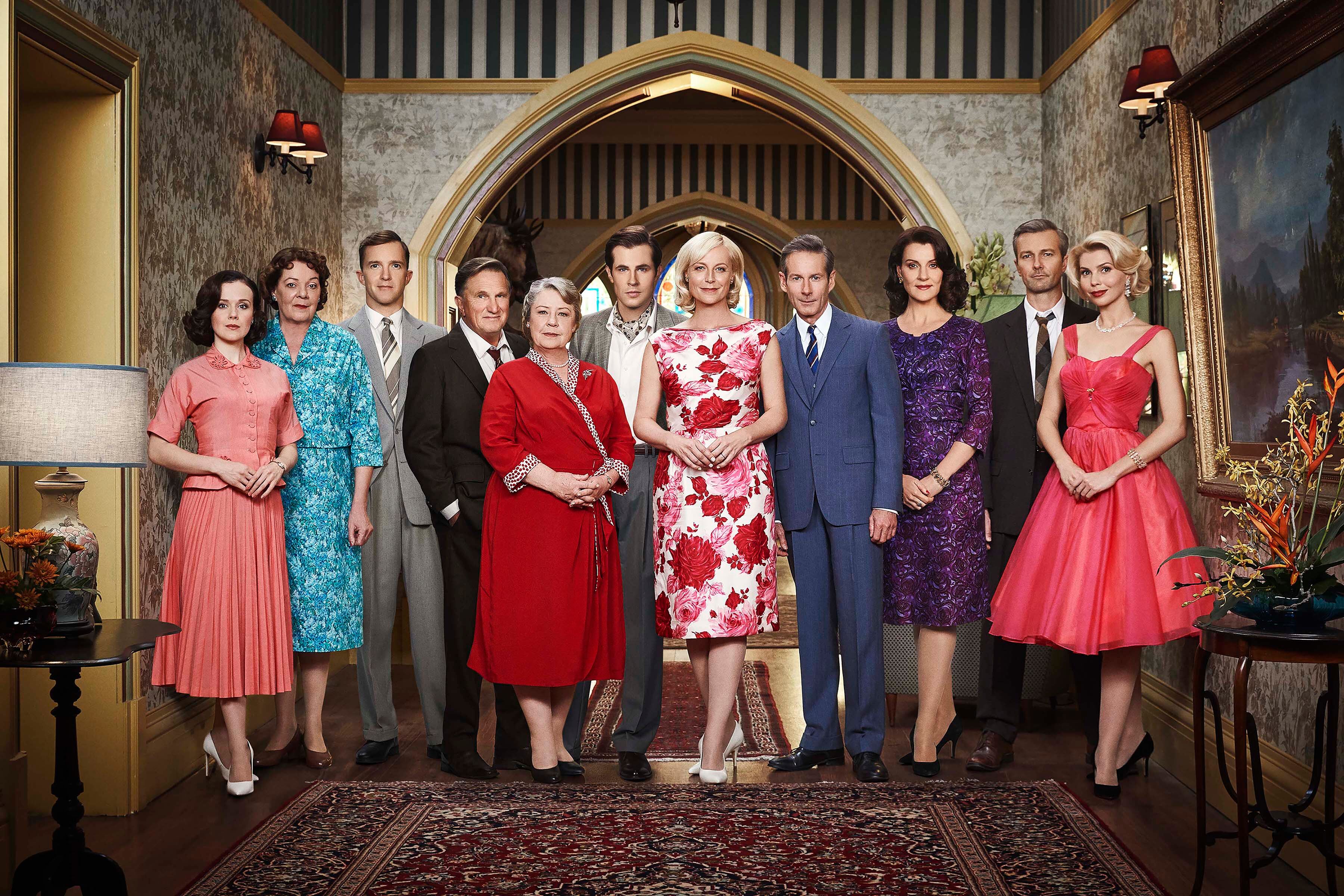 Beginning Friday, August 31, fans of A Place to Call Home can begin to say their final goodbyes to the Bligh’s and Ash Park when Acorn TV begins streaming series 6. The first two episodes will be available on Friday with the remaining 8 episodes added (1 per week) every Monday from September 10 through October 29.