The forthcoming series of Doctor Who features a lot of firsts. Not only does it feature the first female incarnation of the Traveling Time Lord but it will be the first time since the 2005 revival that new episodes will premiere on a Sunday rather than a Saturday when “The Woman Who Fell to Earth” airs on Sunday, October 7 at 6.45pm on BBC1. 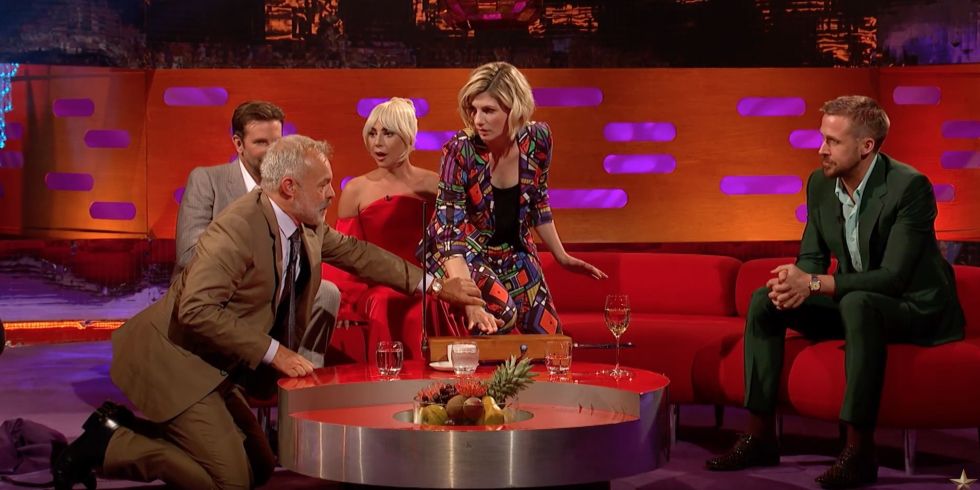 Another first occurred on The Graham Norton Show on Friday. Norton welcomed A Star is Born stars, Bradley Cooper and Lady Gaga, Ryan Gosling and Doctor #13, Jodie Whittaker. Things got a bit ‘mystical’ when Norton revealed he’d brought in the instrument known as the theremin, an electronic musical instrument controlled without physical contact by the thereminist, because it’s a favorite of Gosling. Enter, Jodie Whittaker and Doctor Who.

While there’s no theme tune more iconic in UK TV than the one created for Doctor Who by Ron Grainer and Delia Derbyshire some 55 years ago, yet another first will occur on October 7 when new series composer Segun Akinola will put his stamp on the theme for the longest running science fiction program in television history.

At this point, no one knows what tweaks Akinola has in mind for the classic tune but, following a brief and somewhat nervous turn on the theremin by Lady Gaga, Norton and Whittaker teamed up for a brief jam session on Norton’s Friday night get-together that fairly accurately recreated the opening bars of Grainer and Derbyshire’s Doctor Who original theme tune.

Not only did this brief clip solidify my belief that Graham Norton is far and away the best chat show host on the planet but it also confirmed that I so can’t wait to see Jodie Whittaker as The Doctor a mere one week from today.

Doctor Who “The Woman Who Fell to Earth” premieres Sunday, October 7 at 6.45pm on BBC1.