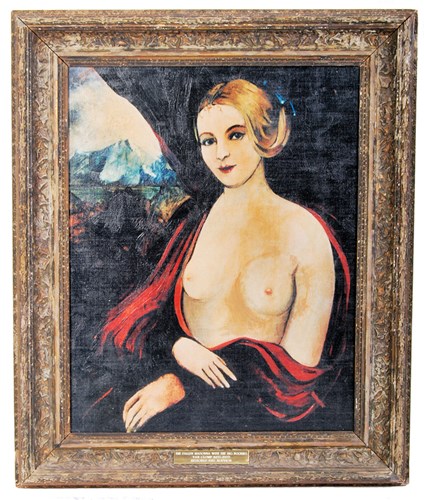 The Fallen Madonna with the Big Boobies can be yours!

The classic David Croft/Jeremy Lloyd comedy series began with military from the Axis powers (Rome-Berlin-Tokyo) occupying the town of Nouvion, France, and stealing all of its valuable artifacts. In addition to the painting of the Cracked Vase with the Big Daisies by Van Gogh and the first cuckoo clock ever made, the biggest post-war artifact prize was The Fallen Madonna, a work of fictional painter van Klomp (1453-1507).

As the storyline played out over the course of its 85-episode, ten-year run (1982-1992), forgeries of the painting were made — mostly by Lieutenant Hubert Gruber (Gary Siner) and Monsieur Roger LeClerc (Jack Haig), who also constantly tried to move, steal or hide it — in order to confuse the Nazis. The painting was often concealed in a knackwurst sausage in the cellar of Café René.

In addition to trying to keep his affairs with his waitresses secret from his wife, Edith, Café René owner René Artois (Gorden Kaye) is forced to work with the French Resistance by both providing a safe house for two brave but clueless British airmen and to try and keep the stolen artifacts out of the hands of Colonel Kurt Von Strohm (Richard Marner). He and Captain Hans Geering (Sam Kelly) and Herr Otto Flick (Richard Gibson), were convinced it would provide a handsome nest egg after the war.

Herr Flick was searching for the painting on direct instruction of the Fuhrer himself, but he secretly wanted it for himself.

In the series finale, the Fallen Madonna is discovered by René and his waitress/mistress Yvette Carte-Blanche (Vicki Michelle) and they quickly elope to Spain with the painting to live a very happily ever after.

In real life, numerous copies of the painting were made during production, many of which were destroyed or damaged during filming. East Bristol Auctions’ auctioneer Andrew Stowe said in the listing for “Lot 30” that although several portraits were made, the version being offered is the only one to survive all nine series of the sitcom.

Stowe said this version of the painting was last seen in the final episode, “A Winkle In Time,” in 1992. The episode reveals the portrait is re-discovered in the arm of a statue outside Café Rene, having been repaired after a “booby” was removed in a previous series. Stowe believes this painting is the exact prop used, as it features a repair identical to one seen during the series finale.

The Fallen Madonna with the Big B**bies will be offered at East Bristol Auctions’ Entertainment Memorabilia Auction on December 1 and can be viewed here.