Arguably, one of at the most popular non-drama programs on both BBC and PBS in recent memory is The Great British Baking Show. Who would have ever thought that a show where a group of amateur bakers, respectfully competing against each other and attempting to impress judges with their baking skills, would be as successful as it has been over the course of nine series (74 episodes and 28 specials).

Premiering in 2010 on BBC2, GBBO ran for four series before moving to BBC1 for the next three series, all with Paul Hollywood and Mary Berry as judges and presented by Sue Perkins and Mel Giedroyc.

In a highly publicized kitchen spat which threatened to turn off the series ovens, Love Productions, the producers of the series, packed up its toys (i.e. tent) and moved to Channel 4 with Paul Hollywood in tow. While Mary, Sue and Mel remained loyal to the BBC, Hollywood remained loyal to the program and went with the new venture that premiered in 2017, adding Prue Leith as a judge and Noel Fielding and Sandi Toksvig as presenters.

Sounding a bit like the on-going Brexit debate of 2016, much of the dispute that was aired publicly centered around which of the four hosts would remain and which would leave. What wasn’t ever made public was that one of the most recognized individuals that had been with the series from the beginning would also be making the trip to Channel 4.

You won’t recognize the name or the face, but you will definitely will be familiar with his work. Tom Hovey has been responsible for creating every illustration in The Great British Baking Show history, from day one in 2010. What each baker intends to bake during a particular challenge is illustrated using animated graphics brilliantly created by Hovey.

“It’s a real case of being at the right place at the time right time,” Hovey told New York magazine’s Vulture about landing the gig. “My best mate worked in television and suggested that I apply for a job in ‘the edit’ at this new cookery show. With no TV experience or idea about how edits worked, I blagged my way in and started two days later.”

It wasn’t long after that Hovey said he admitted to higher-ups that his passion was actually illustration.

At that point, the “higher-ups” showed why they got paid the big bucks by incorporating something artistic into the show. “It led to the director coming to me in the second week saying that he felt there was a visual element missing and maybe I could come up with some ideas,” Hovey recalled. “I sketched a few examples, we decided on a style that fit the bill and I got the gig.” And, as they say, the rest is history. 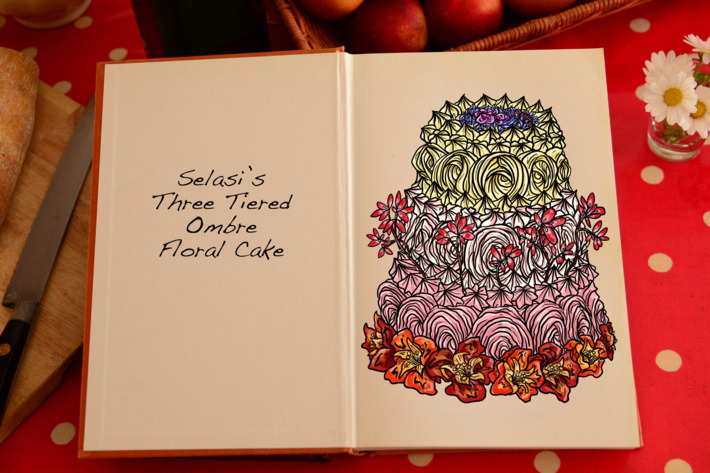 What viewers see in the final versions of the illustrations is as much a part of the overall program as is any of the contestants. What viewers don’t see is the painstaking and meticulous effort that Hovey puts into each program. Hovey estimates he’s created around 3,000 individual illustrations for the show to date — he’s sent photos of the finished bakes from various angles so he can capture their essence, even if the bakers experienced difficulties.

“My job is to illustrate what the bakers planned to create, not what they actually baked in the tent,” he said. “Sometimes if the bakes don’t go as planned, I have to work out with the producers and the bakers how to fix the issues. Add missing elements, extra layers, that sort of thing. Just make the bakes look the best they can, that’s the key.”