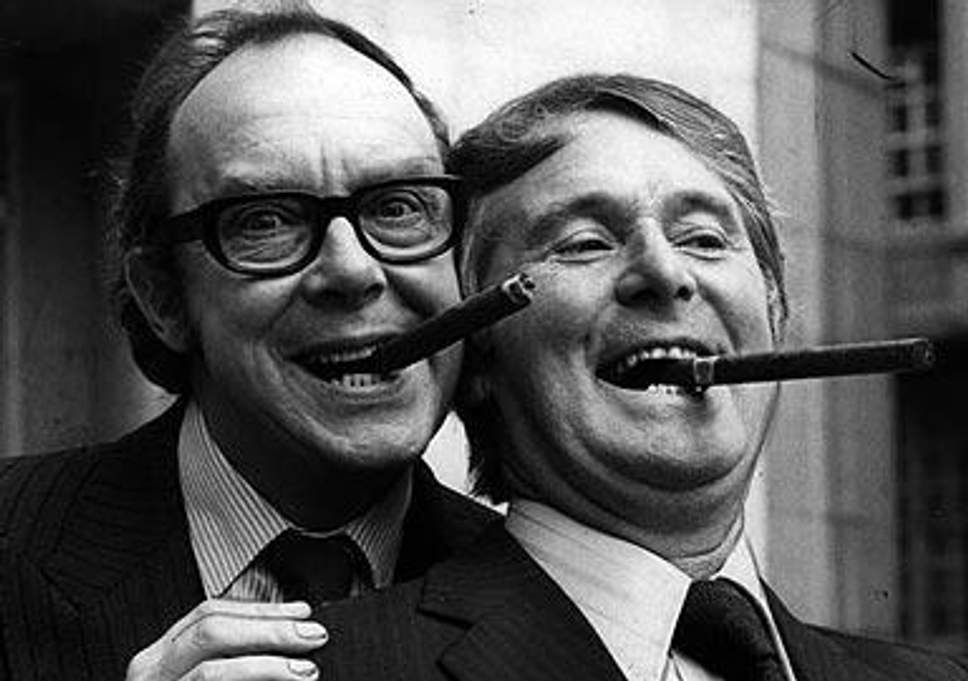 An amazing find occurred recently in the world of British comedy. Originally broadcast in 1968, episodes 5 and 7 of series 1 of The Morecambe & Wise Show were presumed lost until archive preservation expert Philip Morris stumbled upon the tapes in a rundown cinema in Sierra Leone, described by Michael Aspel in a new introduction to the show as the “Indiana Jones of TV archives.”

With this recent discovery and subsequent Boxing Day broadcast of Morecambe and Wise: The Lost Tapes, today’s From the Vault sets the Wayback Machine to 1968 for the premiere of The Morecambe & Wise Show.

The sketch comedy series that ran for nine seasons from 1968-1977 on BBC Two, mainly because it was the only channel broadcasting in color at the time.

The comedy duo partnership lasted from 1941 until Morecambe’s death in 1984.

Morecambe and Wise were starring in Two of a Kind, which ran on ATV from 1961-1968, primarily airing in black and white as ATV had yet to make the switch to color transmission. It was during a contract negotiation for an additional three series on ATV that the duo decided that to improve the quality of the show, and they would need access to color production facilities, which is how BBC Two entered the picture.

Their beloved Christmas broadcasts were considered essential viewing in the UK. The 1971 Christmas special is consistently rebroadcast and remains a classic. Its memorable musical moments include Grieg’s Piano Concerto with André Previn, Smoke Gets in Your Eyes with Shirley Bassey and Glenda Jackson’s medley of Hollywood tunes.

For me, the most classic moment of The Morecambe & Wise Show comes from the 1976 Christmas episode featuring the duo’s version of Gene Kelly’s Singing in the Rain, with Ernie copying Kelly’s dance routine perfectly while Eric Morecambe played the policeman who gets soaked.

The sketch topped a 2016 poll conducted by Radio Times as the best movie spoof of all time, edging out the 1980 film Airplane and the 1978 French and Saunders spoof of Titanic.

I think I can safely speak for all of us when I say thanks to Eric Morecambe and Ernie Wise for a lifetime of laughter, past, present and future.