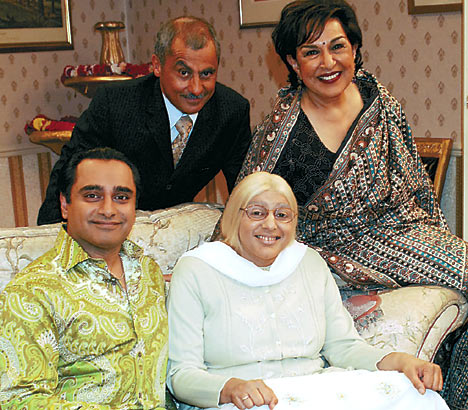 If you’re a fan of the PBS series Unforgotten, which is currently airing on Sunday nights at 10pET/9pCT, you may or may not be familiar with the early career efforts of series co-star, Sanjeev Bhaskar. Bhaskar, who stars as DI Sunny Khan in the popular British crime drama series, has early acting roots in comedy that date back to the late ’90s series Goodness Gracious Me, a sketch comedy series starring four British Indian actors.

In 2001, Bhaskar moved on to The Kumars at No 42, the British sitcom about a fictional British Indian family with a central premise being that Sanjeev’s parents have supported his dream of being a television presenter by having a TV studio built on what used to be their back garden.

Sanjeev’s parents, Madhuri and Ashwin Kumar, are played by Indira Joshi and Vincent Ebrahim and Sushila, Sanjeev’s grandmother, normally referred to as Ummi and played by Meera Syal.  In a 2007 interview with BBC4, Bhaskar stated that the inspiration for the series was a rather embarrassing evening when he took a girlfriend to meet his parents. They asked her awkward questions and he wondered how they would react if he invited a famous person to his home. Ashwin and Madhuri are exaggerated versions of his own parents. The #42 was chosen as the house number because in Douglas Adams’ Hitchhiker’s Guide to the Galaxy series, 42 features prominently as the Answer to Life, the Universe, and Everything.

The A-list of guests that the budding talk show host was able to secure was brilliant. Over the years, Daniel Radcliffe, Hugh Jackman, Richard E. Grant, Stephen Fry, Terry Gilliam, Sir Patrick Stewart, Jenny Agutter, Emilia Fox, James Corden, Graham Norton, Davina McCall, Olivia Colman and Dame Diana Rigg made the trip to the Kumar’s home to be a part of Sanjeev’s dream. While much of the regular cast’s performance was scripted and the improvised content increased in later episodes as the cast became more comfortable with the format, the guest interviews were not. Bhaskar stated in a 2009 interview with The Independent, “We never rehearsed the guests, and the best ones were the ones to keep the ball in the air.”

Unforgotten S3 concludes on Sunday evening, May 12, at 10pET/9pCT on PBS.