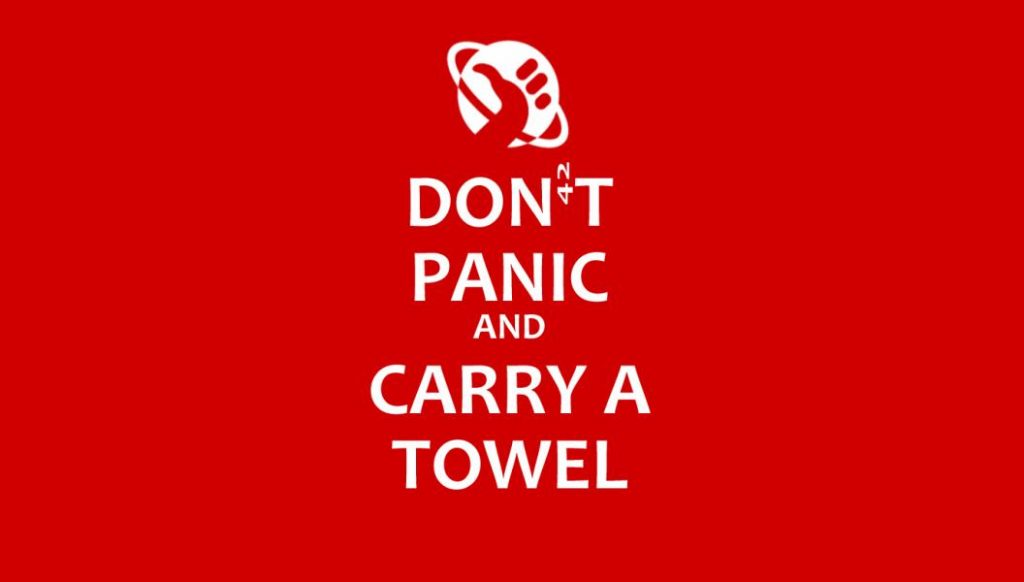 “A towel, [The Guide] says, is about the most massively useful thing an interstellar hitchhiker can have.” – Douglas Adams, The Hitchhiker’s Guide to the Galaxy

Earlier this month, H2G2 fans marked the 18th anniversary since the all-too-early passing of creator/writer, Douglas Adams. Festivities continue around the world throughout the month of May which will also mark also the 18th anniversary of the first Towel Day which took place just two weeks after Adams passed away from a heart attack on May 11, 2001.

May 25th, the annual celebration of the life and work of the late, great Douglas Adams has come and gone but not without the usual fanfare that Towel Day aficionados have come to expect. Once again, celebrations and events occurred around the world from Argentina to the United States and all points in-between. In all, over 27 countries participated in organized ‘Towel Day’ team activities.

In Richmond, VA, Book People offered a 42% discount to anyone openly wearing or carrying a towel. In El Paso, TX, the El Paso Arts Council held the inaugural Borderland Vogon Poetry Slam and in Lincoln, NE,  Don’t Panic Labs served as public collection sites for donations of new and used towels for use at the People’s City Mission shelter.

In London, the annual the Vogon Poetry Slam will happen on Wednesday, 29th of May, at the Miller Pub in London Bridge. For a £5 entrance, ten slammers will be performing the most gut-wrenchingly bad poetry they can for your listening pleasure. In Canada, Toronto celebrated Towel Day by calling all froods for a few drinks at Pogue Mahone at 777 Bay Street. The festivities started at 6p and may still be going on as they have decided to end it when everyone get kicked out.

For those unfortunate few that find themselves a bit Towel Day event challenged with nowhere to go this year, you’ll have to have your Pangalactic gargle blaster all by yourself. Whether celebrating with other froods or by yourself, raise a glass this weekend to the brilliance of Douglas Adams.

Towel Day isn’t only for those residing on Earth. Check out European Space Agency astronaut Samantha Cristoforetti reading from Adams’ “The Hitchhiker’s Guide to the Galaxy” while aboard the European laboratory Columbus on the International Space Station several years ago.