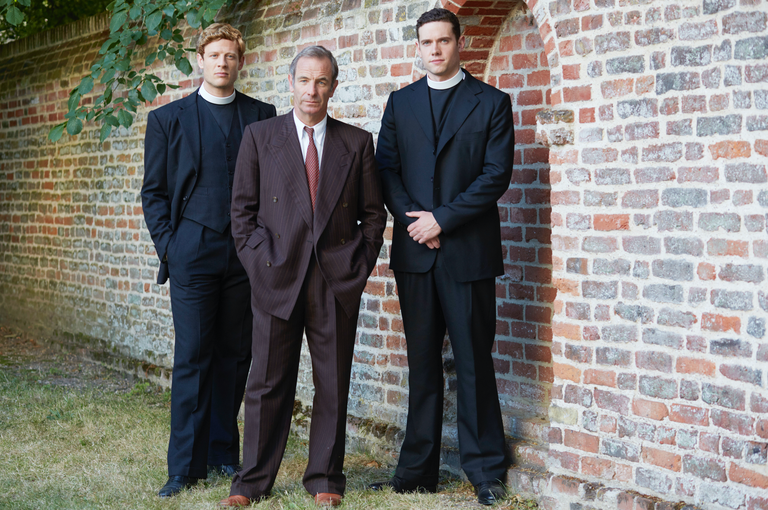 As UK viewers prepare for next Sundays return of Aidan Turner in Poldark, American audiences will have their own premiere to wrap their heads around as season 4 of Grantchester graces the PBS airwaves at 9pET/8pCT on Sunday, July 14. To prepare us all, the cast and crew take us behind the scenes of filming of season 4, and preview what’s in store for fans.

It’s been nearly two years since we last spent some time in Grantchester. Here’s a bit of a Grantchester 101 refresher course and a look back and a brief look ahead to get us ready for next Sunday.

Looking back on S3 of Grantchester….

It’s 1955 and Sidney Chambers has just written his letter of resignation, breaking Mrs. Maguire’s heart in the process in order to follow his own. He’d intended to give up his vicar-and-sleuth duties, marry Amanda, and raise baby Grace together in London.

But he never did submit that letter, and it was Amanda’s and Sidney’s hearts that broke; Sidney ultimately couldn’t desert his calling, his congregation, and his makeshift family. For that family, the season ended on an up note: Mrs. Maguire married and became Mrs. Chapman, Geordie and Kathy made up, and Leonard embraced honesty…and Daniel!

Looking ahead to S4 of Grantchester….

It’s now 1956, and Elvis Presley has Geordie grumbling about the decline of decency, while mold in the vestry has Mrs. Chapman grumbling about baking soda vs. vinegar. But it’s action, not grousing, that Sidney craves, and when an African American reverend arrives to speak about religion’s role in the civil rights movement, Sidney finds inspiration…and perhaps something more!

Sidney Chambers, played brilliantly by James Norton, has been Grantchester‘s jazz-loving, crime-fighting vicar since the beginning. As season 4 begins, Norton cites the tying up of the Amanda storyline and the natural conclusion that came with Sidney’s choosing the church as a good point for departure.

The captivating new vicar, Will Davenport, brings Tom Brittney (Outlander) to Grantchester. As chaplain at Cambridge’s Corpus Christi, he’s considered, like Sidney, a “boat-rocker” and a “liability” by the Dean. But unlike Sidney, Will wears his rebellion on the outside as well, arriving in Granchester clad in leather, on a motorcycle. A fan of rock-n-roll, Will is younger than Sidney, meaning that he never fought in the war and is free of the kind of post-war demons that torment Sidney.

For series 4, a murder sees racial tensions spike in the town, while Geordie investigates a slum connected to a deadly web of vice in.

Grantchester returns for an all-new season on Sunday, July 14 at 9pET/8pCT on PBS!