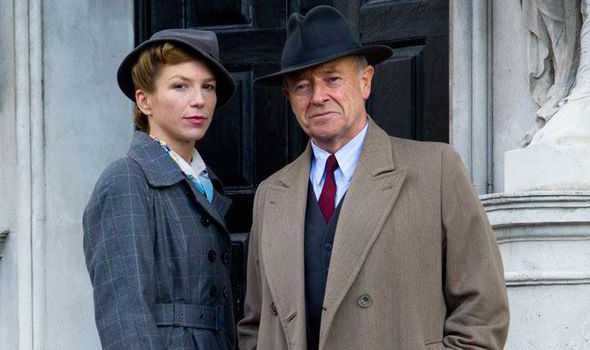 Rumor has it the war may not be over for Detective Chief Superintendent Christopher Foyle and his driver, Samantha. Foyle’s War, that is. Following a recent Radio Times poll asking magazine readers what programs from this century they would most like to see revived. Given the fact that Foyle’s War has already been revived once, it’s no surprise that the series topped the list in the most recent poll.

The World War II detective drama, starring Michael Kitchen and Honeysuckle Weeks, ran from 2002 to 2007 and centered around DCI Foyle seeking justice for cases from war profiteering to murders. Some fairly significant fan pressure revived in 2010 but after eight series, ‘the war’ finally ended in 2015.

While, at the time, series creator/writer Anthony Horowitz seemed to be ready for the series to end in 2015 given the fact he had spent almost 20 years writing the series saying, “It had to come to an end sometime. We went from 1940 all the way through to 1947 – and I told countless true stories about the war. I felt that there were no more true stories to tell about that period, I’d sort of covered pretty much every area.”

The brilliant part of all of this current speculation is that series creator/writer Anthony Horowitz has revealed he would be up for writing one or two Foyle’s War Christmas specials – or potentially a whole new series. “I’d certainly be up for a Christmas special or two if anybody asked,” he told Radio Times, before addressing the “missing year” of 1944. “It would actually make a whole series!” At this point, there’s no word yet as to whether or not Michael Kitchen or Honeysuckle Weeks are interested in returning but one can only hope that with the creator/writer on board, there might be a chance.

While we wait for official word as to if and/or when Foyle’s War will return, here’s a brilliant video of Honeysuckle Weeks on The Late Late Show with Craig Ferguson from May 2014 which only solidifies why I think Ferguson is still one of the absolute best latenight chat show hosts ever.

Finally, taking a look at the overall results of the Radio Times poll to see how your list of shows you’d like to see return stacks up, there were a few surprises among the top-10 but it comes as no surprise that Foyle’s War topped the list.