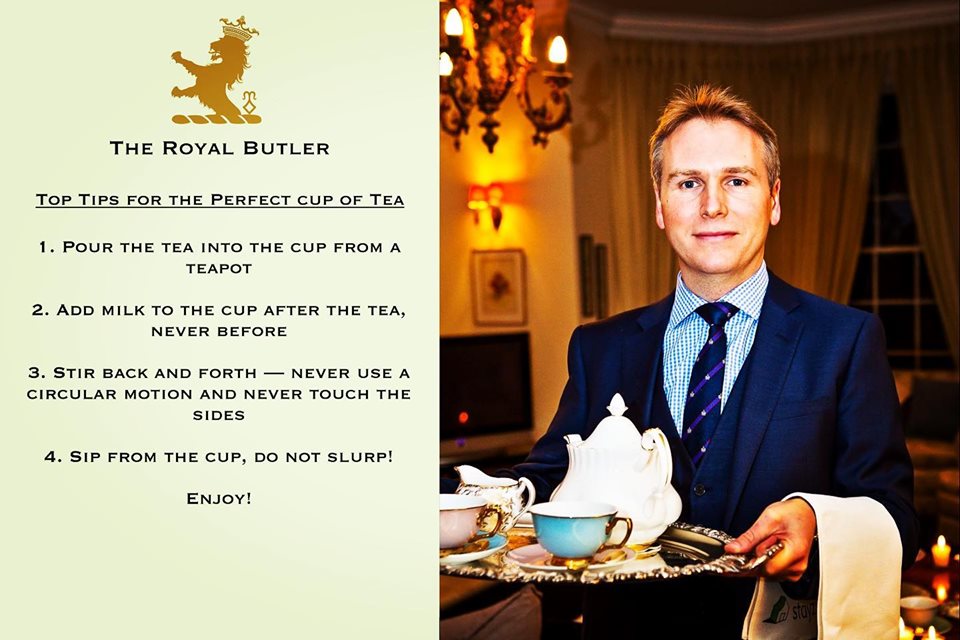 At long last, it’s Afternoon Tea Week in the U.K.!  Running from 12th – 18th August and celebrated in venues across the U.K, ranging from quaint tea rooms, to 5-star hotels and countryside manors all paying tribute to the nation’s favorite pastime. Someone we should all be acquainted with especially during this week is Grant W.V. Harrold, a.k.a. The Royal Butler. Harrold is a Royal and British Etiquette Expert, Royal Commentator, Broadcaster and Entertainer.

Described as “The Defender of Etiquette”, Harrold  has been a member of the royal household of Their Royal Highnesses The Prince of Wales and The Duchess of Cornwall and currently works with and advises royals and their households across the globe. For the last 20 years, Grant has been learning and developing his passion for etiquette, which he shares on his courses at The Royal School of Etiquette and The Royal School of Butlers which he founded while working for the Prince of Wales as a member of his household at Highgrove House.

Whether you call it the UK’s favorite pastime or recognize it for what it truly is, the most quintessential of all English customs, the history of its beginning is relatively simple. the concept of ‘afternoon tea’ was introduced in England by Anna, the seventh Duchess of Bedford, in the year 1840. As the story goes, The Duchess would become hungry around four o’clock in the afternoon. Given the fact that the evening meal in the royal household was to be served rather late, albeit fashionably late, at eight o’clock, it left a rather long period of time between lunch and dinner.

Since the late 1800s, traditional afternoon tea has consisted of a selection of dainty sandwiches, including the obligatory thinly sliced cucumber sandwich variety, scones served with clotted cream and preserves. Cakes and pastries were also served especially during the more fashionable events frequented by upper-class and society types. Today, however, afternoon tea is likely to be just a biscuit or small cake and a mug of tea, usually produced using a teabag.

Whatever the case, wherever you are, this is your opportunity to find the perfect venue and book the best place for afternoon tea. If Claridges, the Dorchester, the Ritz and the Savoy, Harrods or Fortnum and Mason are a bit too far to travel or if you’d rather celebrate quietly in your own home with a group of friends, Grant W.V. Harrold is here to help with tips on making the ‘perfect cup of tea’.