While it was, admittedly, hard to leave the ice cream of Sidmouth and then also having to wave goodbye to Lady Grey of the DeVere Tortworth Court Hotel, the idea of walking the grounds of Hampton Court Palace as part of the next leg of the To the Manor Born KERA Tour of England tour somehow made everything more than tolerable. Just a stones throw from central London on the River Thames, the palace was originally built in 1515 for Cardinal Thomas Wolsey.

In 1529, however, as Wolsey fell from favor, the cardinal did his best to check his disgrace by giving the palace to King Henry VIII who later enlarged it. Over the years, King William III oversaw a massive rebuild and expansion which ended in 1694, leaving the palace in two distinct contrasting architectural styles, domestic Tudor and Baroque.  King George II was the last monarch to reside at Hampton Court Palace.

Weaving our way through the palace, aside from the royal apartments, it’s definitely worth a trip through the kitchens to get a complete understanding as to just how the sausage is made when it came to preparing the meals ‘fit for a king’. On the way to the kitchens, we ran across something right out of Monty Python and the Holy Grail. I kept waiting for Eric Idle to yell out, “Bring out your dead!” Unfortunately, that never happened. 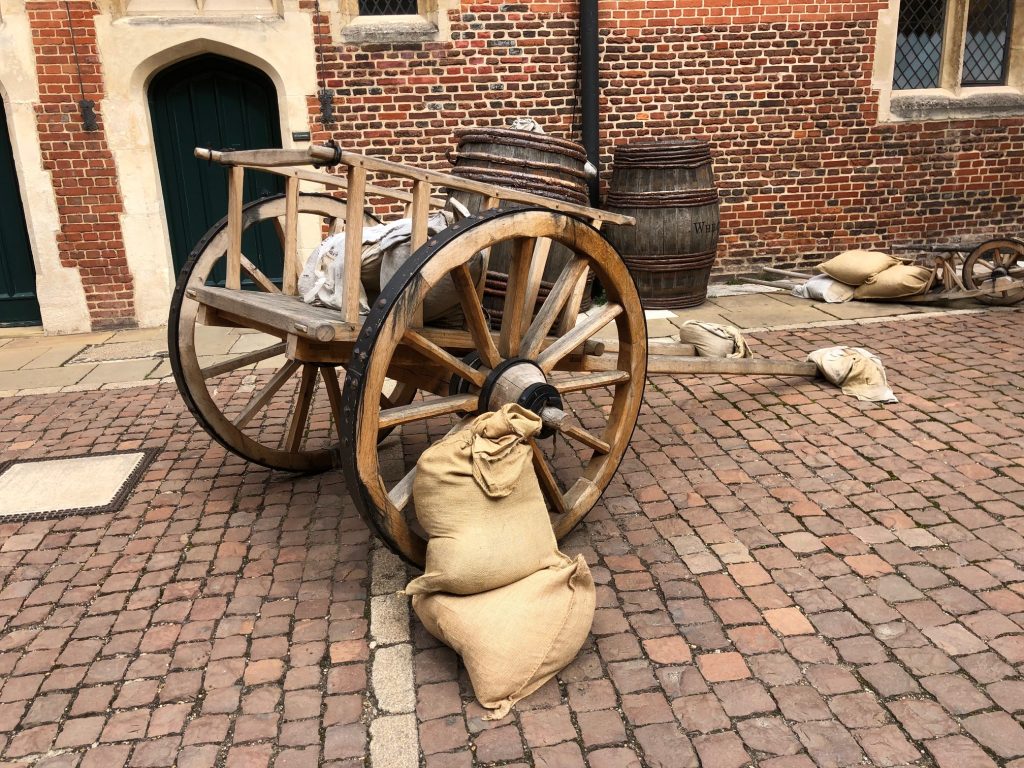 On the way to the kitchen at Hampton Court Palace. Photo: Bill Young

As you can imagine, any meal for those residing at Hampton Court Palace involved meat, meat and more meat. I’ve never seen a walk-in oven before much less one that comes with a person that works it! 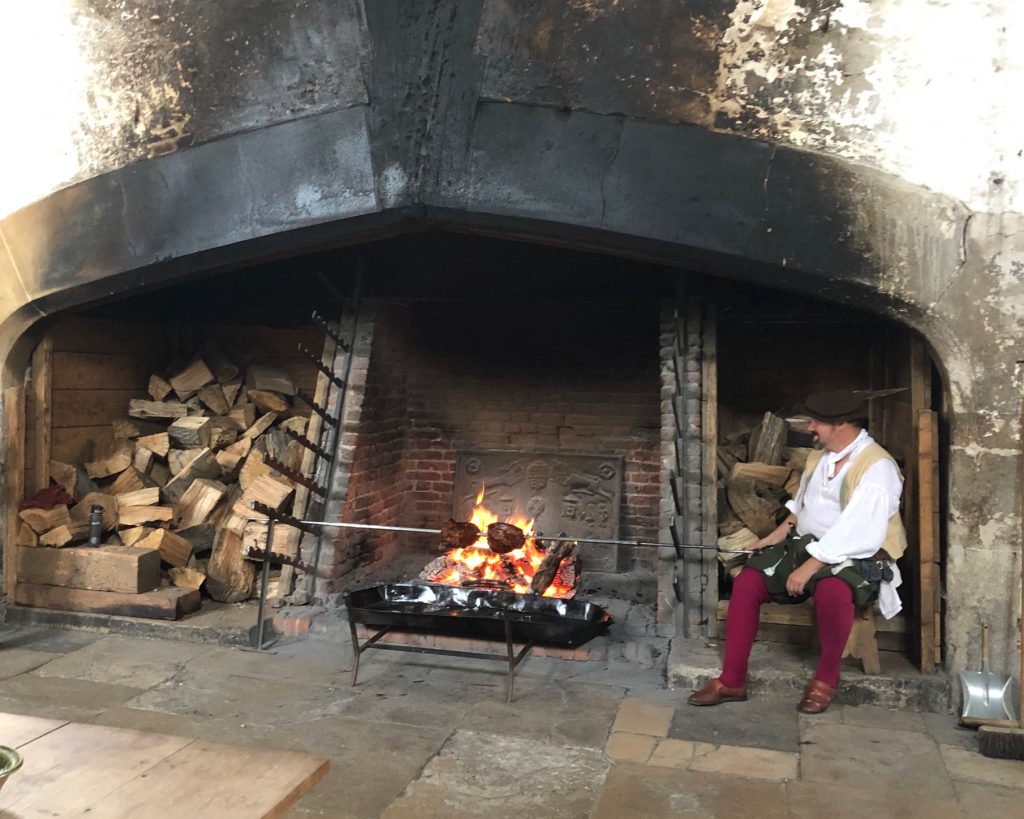 Word to the wise…pay close attention to #2 for your own safety. 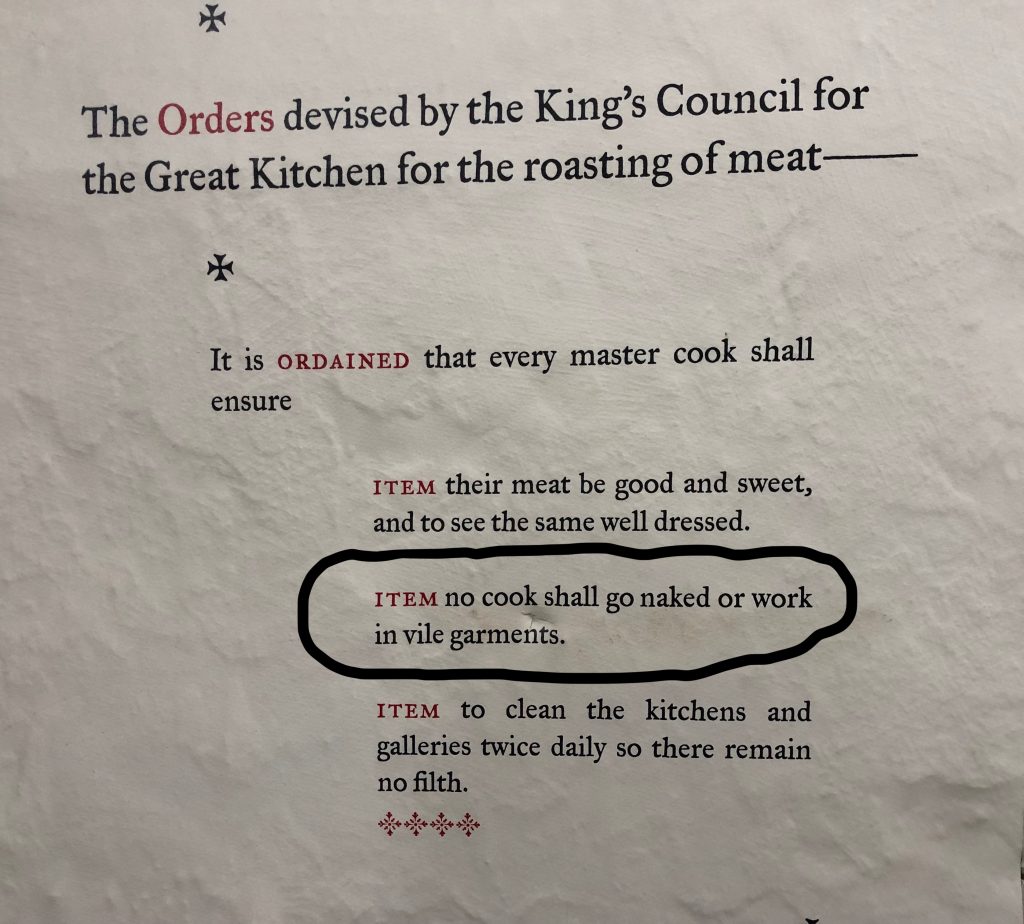 Orders from the King’s Council for the roasting of meat. Photo: Bill Young

Apart from the Palace itself and its gardens, other points of interest for those on the tour included the celebrated maze (which we barely navigated our way through without the help of Jim, fortunately), the historic royal tennis court and the huge grape vine, the largest in the world as of 2005, to which I can attest to having sampled some of the best grapes ever!

Along with St James’ Palace, Hampton Court Palace is one of only two surviving palaces out of the many the King owned. The palace is currently in the possession of Queen Elizabeth II and the Crown.

Sadly, we have one last evening in central London before heading home. Hearing that it will be 43 degrees F upon leaving vs 97 F in Dallas with the humidity at 68%, I may just stay a little longer at this point.