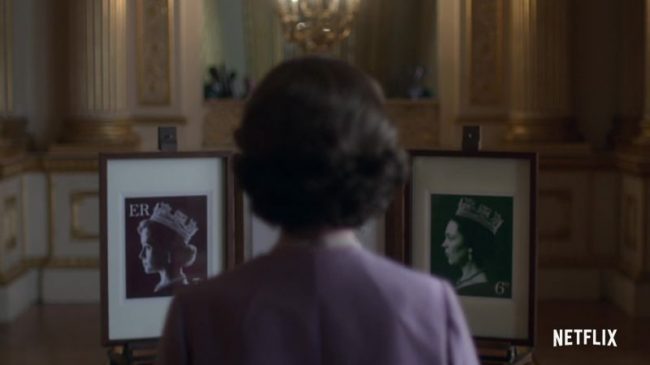 At long last, season Three of The Crown, starring Oscar-winning Olivia Colman as Queen Elizabeth II (replacing Oscar-nominee Claire Foy), arrives on 17 November. Giving us a glimpse of Olivia Colman playing Queen Elizabeth II for the first time, the recently released Netflix trailer shows that the creators definitely have a sense of humor or they grew up watching Doctor Who.

As the trailer plays out, we see on a left-hand easel in Buckingham Palace, Claire Foy’s profile on a stamp; on the right-hand side is a brand-new version of the stamp with Colman’s portrait. Inspecting both images to see how her face has changed is the Queen herself, in her new form, and that’s where the fun starts.

As only Doctor Who could, the footage directly addresses the recasting of the role with season one and two star Claire Foy regenerating into Olivia Colman before our very eyes accompanied by the wittiest of banter between one of the attendants and the Queen herself. Dialogue that, until now, would have been reserved for the Dowager Countess and Mrs. Crawley.

Attendant: “Everyone is delighted with the new profile, ma’am. Which they feel to be an elegant reflection of her majesty’s transition from a young woman to–”

Attendant: “Just the tiniest of changes.”

Then, right on cue, as if the Queen was addressing the number of cast changes directly to the audience that have been watching The Crown since the beginning as opposed to commenting on the stamp to the attendant in the room, she says, “A great many changes. Nothing one can do about it. One just has to get on with it.”

The transition from Colman to Foy isn’t the only big cast change that viewers will have to adapt to as virtually the entire cast ‘ages up’ for series 3. You really are going to need a program to be able to tell the players. Tobias Menzies takes over for former Doctor Who star Matt Smith who played Prince Philip, Josh O’Connor (The Durrells in Corfu) and Erin Doherty (Call the Midwife, Les Misérables) will take over the roles of Prince Charles and Princess Anne while Gillian Anderson (X-Files, Bleak House, Any Human Heart, Great Expectations, The Fall) will play Margaret Thatcher with Emerald Fennell (Call the MIdwife, Victoria) portraying Camilla Parker Bowles.