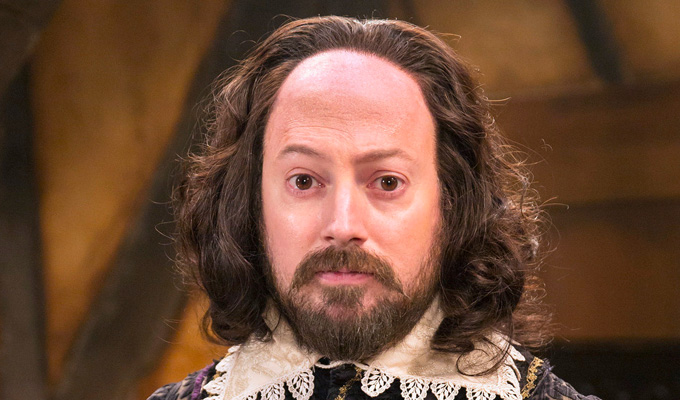 Chortle has confirmed that David Mitchell will reprise his role from the brilliant sitcom as William Shakespeare when Upstart Crow comes to the stage with a live version in London’s West End. In addition to Mitchell, Gemma Whelan will reprise her TV role as aspiring actress Kate. No further cast announcements have been made as of yet.

Creator Ben Elton announced the news this past week on Good Morning Britain that the show will open at the Gielgud Theatre on Shaftesbury Avenue on 7 February with a plot that appears to echo the twins storyline in Twelfth Night. Set in 1605, the storyline will see Shakespeare struggle to produce a hit after the relative flops of Measure for Measure and All’s Well That End’s Well. Mirroring the small screen series, the playwright must raise his game or risk King James’s wrath.

Commenting on his West End debut, Mitchell said, “I’m delighted to have the opportunity to bring history’s most famous balding dramatist to the West End via the amazing comic imagination of Ben Elton. Theatre-goers can look forward to a comedy steeped in authentic Shakespearean ambience in every way apart from the smell.”

Upstart Crow will run from 7 February 2020 through 25 April 2020 at the Gielgud Theatre on Shaftesbury Avenue. For tickets, click here.