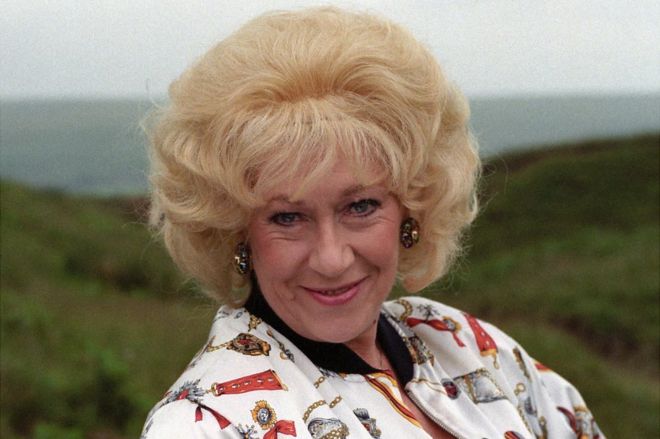 Last of the Summer Wine, the long-running British situation comedy written by Roy Clarke (Open All Hours, Keeping Up Appearances, Still Open All Hours, Young Hyacinth) that lasted for 31 years (1973-2010) has lost one of its most lovable characters. Jean Fergusson, the mini-skirt wearing, peroxide blonde Marina, died late last week at the age of 74. The series followed the youthful antics of a trio of young-at-heart pensioners and starred Bill Owen, Peter Sallis, Brian Wilde, Michael Aldridge and Frank Thornton.

Fergusson had a 25 year-run on LOTSW playing Marina in 216 episodes of the series’ 295 episodes from 1985 until the series was cancelled in 2010. The mini-skirt wearing, peroxide blonde, supermarket checkout assistant Marina, was first performed by Fergusson in a stage version of the show in summer seasons in Eastbourne (1983) and Bournemouth (1984). The character was such a hit that Clarke, who wrote all 295 episodes of the series, decided to incorporate Marina, along with the characters of Howard and Pearl, into the hit television series.

In addition, Fergusson also appeared in several television shows, including All Creatures Great & Small, Crossroads and The Practice, before taking on the role that would define her for the next two plus decades.The accomplished theatre actress also appeared in several different roles in Coronation Street most recently playing the part of Dorothy Hoyle until 2011. 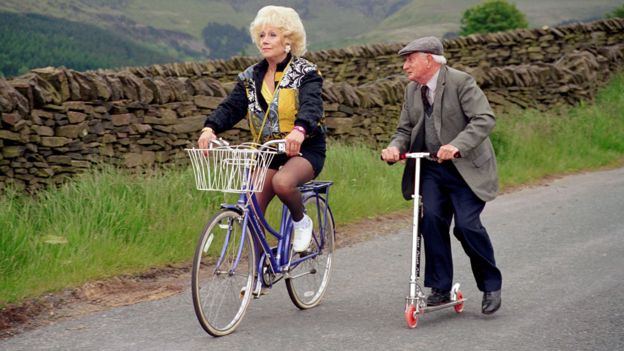 Robert Fyfe and Juliette Kaplan came over with Fergusson from the stage show and replaced the original actors playing Howard and Pearl. While Howard was perpetually infatuated with Marina as she encouraged him to get away from Pearl, their back and forth never went beyond a kiss.

Bike rides with views of the instantly recognizable dry-stone walls and the Yorkshire landscape behind them became the standard scenario with the mini-skirted Fergusson enduring the typical Northern England elements. “My character doesn’t get to wear an overcoat,” said Fergusson. “There was no room for thermals! I never knew what teeth-chattering meant until I came to do this series.”

In 2014, Fergusson sold off the iconic bike she was given from Last of the Summer Wine, when she moved from Yorkshire to London and realized she had no space for it. It made £500 at auction. “If I could have kept it, I would have done,” said Fergusson, “but I’ll let some wonderful fan have the pleasure of it.””