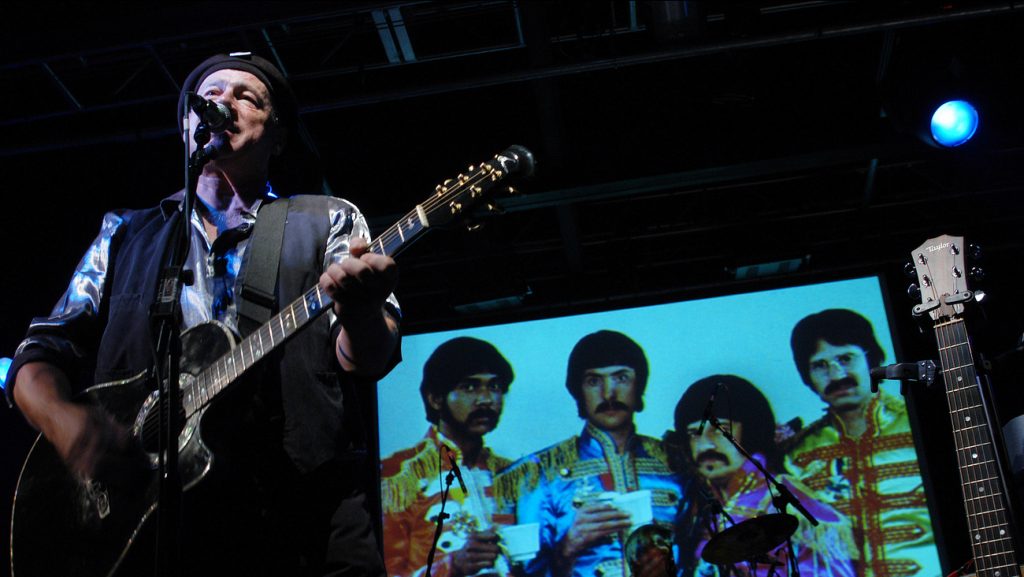 Best known for his work with the Bonzo Dog Doo-Dah Band, The Rutles and collaborating with the British comedy troupe Monty Python, Neil Innes died unexpectedly on Sunday at the age of 75. Innes, who will forever be known as ‘the 7th Python’, performed piano, guitar and vocals in The Bonzo Dog Doo-Dah Band whose hit in 1968, “I’m the Urban Spaceman”, was co-produced by Apollo C. Vermouth – a pseudonym for Sir Paul McCartney. Innes also co-wrote, with singer/songwriter Vivian Stanshall, “Death Cab for Cutie”, which was featured in the Beatles’ 1967 film, The Magical Mystery Tour, and later inspired the US band of the same name.

Created by a group of British art-school students in the 1962, the Bonzo Dog Band combined elements of music hall, traditional jazz and psychedelic pop with surreal humor and avant-garde. The Bonzos came to the public attention through a 1968 children’s television/comedy show, Do Not Adjust Your Set, which featured future Monty Python members Eric Idle, Terry Jones, Michael Palin and Terry Gilliam.

His long association with the Pythons included contributing music to the Monty Python’s Previous Record (1972) and The Monty Python Matching Tie and Handkerchief (1973) albums and playing a major role in performing and writing songs and sketches for their final TV series in 1974, after original Python member, John Cleese, left the building. Innes was one of only two non-Pythons ever to be credited writers for the TV series, the other being Douglas Adams (Hitchhikers Guide to the Galaxy).

In his post-Python days, Innes joined with Python’s Eric Idle on the series Rutland Weekend Television, a sketch show based in a fictional low-budget regional television station that spawned The Rutles. Their spot on mimicry of The Beatles saw Innes playing the character of Ron Nasty, who was based on John Lennon. Along with the other ‘pre-Fab Four’ members, Dirk, Stig and  Barry, Nasty starred in the Rutles’ 1978 film, “All You Need is Cash”, produced by Lorne Michaels.

For my money, however, I will forever remember Neil Innes for his contribution to cinema greatness in Monty Python and the Holy Grail with songs such as “Knights of the Round Table” and “Brave Sir Robin” and for his roles in the film as a head-bashing monk, the serf crushed by the giant wooden rabbit, and the leader of Sir Robin’s minstrels.