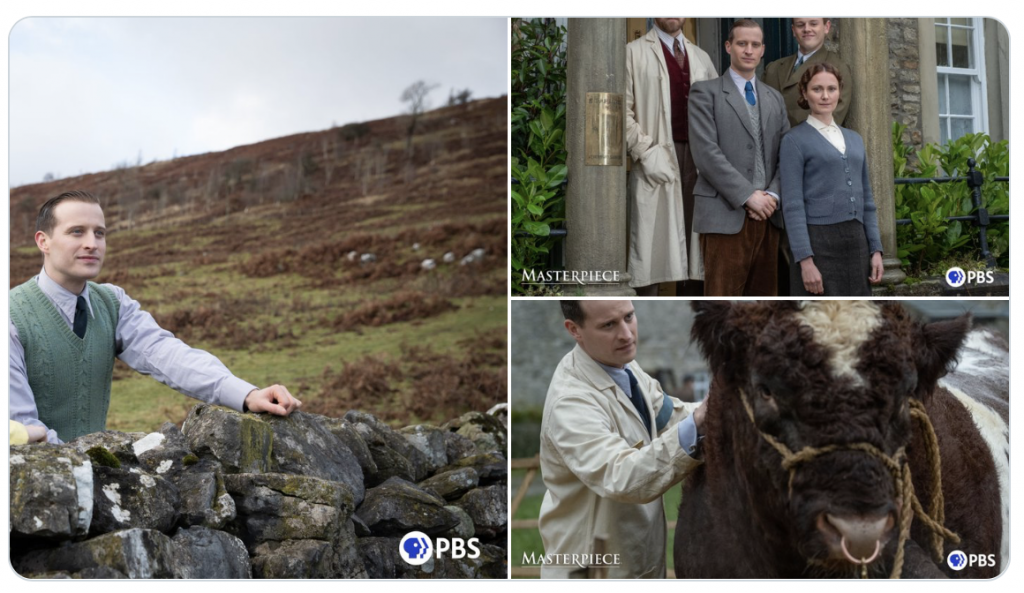 All Creatures Great and Small starring Nicholas Ralph along with Samuel West, Callum Woodhouse, Anna Madeley and Rachel Shenton is coming to PBS Masterpiece! Based on the books of Alf Wight (writing under the pseudonym, James Herriot), the original series followed veterinary surgeon James Herriot as he treated animals in the English countryside in the 1930s. Starring Christopher Timothy, Robert Hardy and Peter Davison, it was broadcast in both the U.K. and the U.S. and ran for 7 series (1978-1990) and 90 episodes.

For the 21st century version, Nicholas Ralph will make his television debut in the lead role of James Herriot. He’ll be joined by Samuel West (Mr Selfridge) as Siegfried Farnon, the wonderfully eccentric veterinary surgeon and proprietor of Skeldale House who reluctantly hires the recently qualified Herriot into his rural practice. Anna Madeley (The Child in Time, Patrick Melrose) will portray Mrs Hall, the resident housekeeper and matriarch of the same institution.

Siegfried’s errant and charismatic younger brother, Tristan, will be played by Callum Woodhouse (The Durrells in Corfu) and Rachel Shenton takes the role of Helen Alderson, an independent local farmer’s daughter who helps her father manage the family farm and care for her younger sister.

Here’s your first look at the brand-new adaptation of All Creatures Great and Small starring Nicholas Ralph as James Herriot, along with Samuel West, Callum Woodhouse, Anna Madeley and Rachel Shenton – coming to MASTERPIECE! pic.twitter.com/xzWtNVK5fp

“When it originally aired on public broadcasting, All Creatures Great and Small captured the hearts of millions of television viewers,” Masterpiece series executive producer Rebecca Eaton said in a statement in June of 2019. “We promise that the new series will have all the wit, warmth, and quirky charm of the original — and of course, lots of irresistible animals.“

“Revisiting James Herriot’s beloved stories is an immense privilege and we are honored that Alf Wight’s family have entrusted us with his legacy. It is a responsibility we take very seriously,” said Colin Callender, executive producer and CEO of Playground (Wolf Hall), the UK production partner on the project.

“Herriot’s glorious books remind us how to connect and belong again. The series will embrace the fun and the nostalgia of revisiting the England of the past, while celebrating Herriot’s values that, despite all our current upheaval, still underpin British life today,” continued Callender.

With 2020 marking the 50th anniversary of the original publication of the much-loved books, filming has begun in the Yorkshire Dales on the 21st century reboot with the 6-part (plus a Christmas episode) mini-series from Channel 5, Playground (Howard’s End, Wolf Hall) and PBS will make its way to the small screen in 2021.