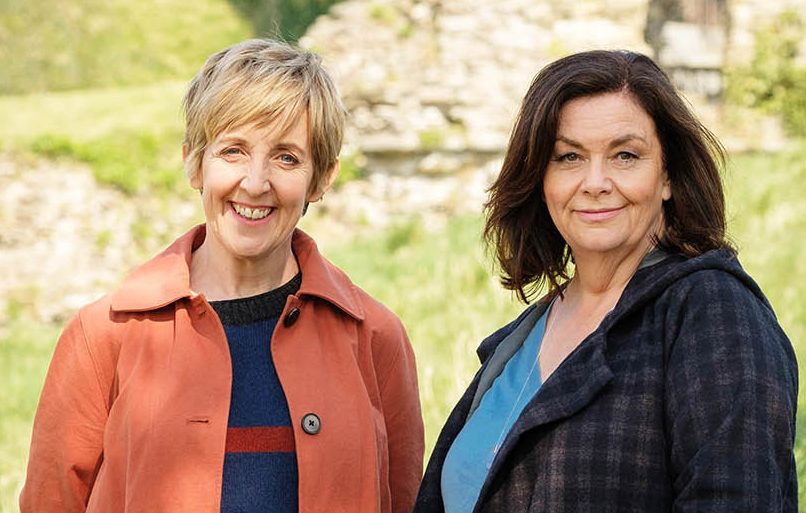 Maggie Cole is in trouble with a capital “T”. The day started out so well.  It was a day like any other day. Then came a seemingly innocent interview on the radio by the local paper about local life where she, unfortunately, took no prisoners. It doesn’t help that the interview takes place in a pub and Maggie has one too many which leads to an extreme case of loose lips by the time the interview is over.

The Trouble with Maggie Cole delves into what happens when idle gossip escalates out of control and starts to affect people’s lives. Set in a picturesque fishing village that looks eerily like the fictional village of Portwenn in Doc Martin, the series centers on Maggie Cole (French), the self-appointed oracle of this close-knit community.

Maggie takes it upon herself to make it her business to know a little bit about everyone’s lives. She certainly doesn’t pay attention to the cautionary adage that ‘those in glass houses shouldn’t throw stones’. When a radio journalist interviews her for a small reportage piece about local life she gives him far more detail (i.e. embellishment) about the locals and their personal lives than he was counting on.  In the days and weeks following the show’s broadcast, Maggie sees the butterfly effect of how her very public gossip-fest affects various figures around the town and disrupts their lives.

The Trouble with Maggie Cole will air in March on ITV. Hopefully, there’s a PBS broadcast in the not-too-distant future.