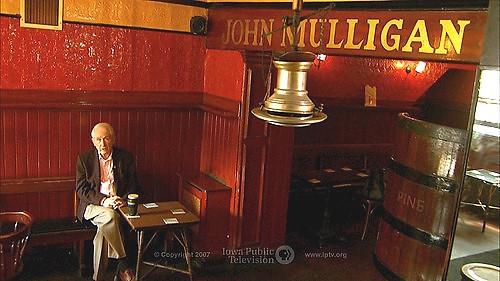 Regular readers of Tellyspotting may recognize this post from St. Patrick’s Day in years past. Well, it’s been several years since I re-posted it so I thought it was worth repeating given most of us will be spending tonight at home. So bear with me today as this day just isn’t the same without Frank. If you are new to us since last year, I hope you enjoy. As you read this, raise a virtual ‘jar’ of Guinness to Frank McCourt.

St. Patrick’s Day and every day, for that matter, will never be the same without Frank since he passed away in July of 2009 at the age of 78, but I’m so very thankful for those very special two weeks in Dublin back in 2007. Several times, Frank would raise a glass at the conclusion of 12+ hour shooting days and offer a traditional Irish toast. I know he wouldn’t mind me repeating one of them in his absence this St. Patrick’s Day as we raise a pint glass in Frank’s direction.