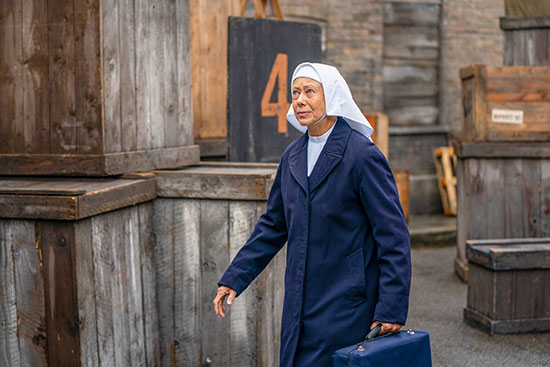 Over the years, Call the Midwife has tackled such subjects as kitchen table abortions, Down’s syndrome, thalidomide, alcoholism, homosexuality, depression and racism. In series 9 alone, the residents of Nonnatus House deal with cancer, diptheria, dementia, fistula, and homelessness. Unfortunately, it looks like Sister Julienne and the rest of gang in Poplar have finally come up against something they can’t resolve in a few episodes…for the time being, anyway.

The most recent TV and film industry casualty of the coronavirus pandemic reaches all the way to Poplar and the bike-riding resident nuns of Nonnatus House as the BBC has shut down filming of this year’s Call the Midwife Christmas Special and the forthcoming series 10.

A statement by the BBC said, “Our priority is the safety of our amazing cast and crew, and we don’t believe that shooting at the current time is feasible or responsible. However, the moment the situation improves, the nuns and nurses of Nonnatus House will be back on their bikes, bringing babies and joy into your living rooms.”

Fortunately for American audiences, series 9 premieres at the end of this month on Sundays at 8pET/7pCT beginning March 29 on PBS. In addition, the entire 8-part series will be available to stream

A production shut down could, potentially, derail the traditional January transmission date in the UK on BBC One and the late March/early April premiere in America on PBS in 2021. Until then, America will always have S9.