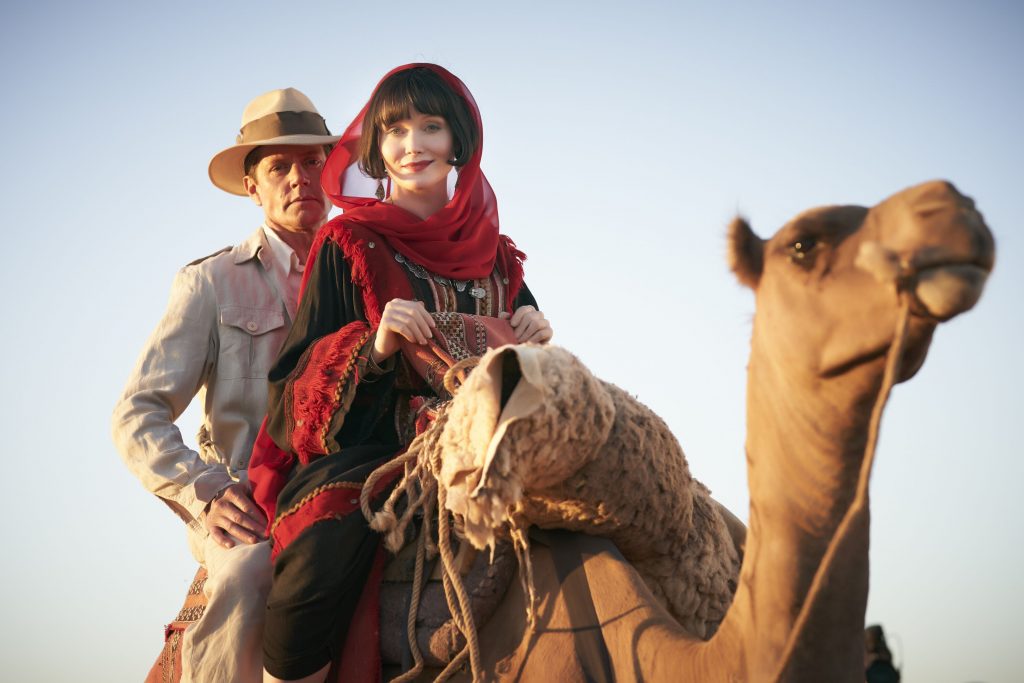 Nathan Page and Essie Davis in Miss Fisher and the Crypt of Tears. Photo: AcornTV

No matter where you are in the world today, if you are merely practicing social distancing, ‘working from home’ or are full-on ‘sheltered in place’, take comfort in the fact that, beginning today on AcornTV, Miss Phryne Fisher is back after a 5- year hiatus, which seemed like an eternity, from the popular Australian series, Miss Fisher’s Murder Mysteries, to star in a full-length feature film, Miss Fisher and the Crypt of Tears. The series was so popular, in fact, that a major portion of the initial funding for the film came directly from fans of the series through a Kickstarter campaign which raised an incredible $733,210 AU or $562,812 US!

We had the great good fortune to sit down with Miss Fisher co-star, Nathan Page, leading up to the release of the film in Australia on 27 February and prior to the U.S. theater release on March 13 and today’s streaming release via AcornTV.

Nathan Page: Hi Bill, How are you?

Bill Young: Good morning, Nathan. Absolutely wonderful! Thanks for taking a few minutes out of your day to talk about Crypt of Tears! I know time is short so can you speak a little bit to the attraction of the series overall with regards to the fact that going into this feature film you had a fan base that essentially pre-funded almost an entire feature film. That had to be very exciting knowing the fan base thought so much of the series.

Nathan Page: Yeah, absolutely. Actually, we couldn’t have done the film without that fan base in the first place and we were really surprised. We knew of the fan base when we were doing the TV series but it kind of caught us all by surprise. we’re aware that the Kerry Greenwood novels were really popular in Europe and a little bit in the US but things can get lost in translation as well from board to screen. And it seemed to be this momentum that picked up. And it’s been amazing the support that we’ve had, it’s been incredible so it’s just moved in onto the screen obviously now with all the support from the fan base. A lot of them have been coming from the US and Canada and all over the world actually to Australia towards some of the premieres. It’s been great to see and meet them.

Bill Young: It must have been fun after almost five years since the series ended to get everybody back together.

Nathan Page: Yeah, it was fun. It’s an amazing transition going from the small screen to the big screen. I wouldn’t say we had that in our sights but a we certainly had the people with the skill set to do it with Roger Lanser, Director of Photography. The TV series was shot beautifully anyway so it’s sort of asking to be on the big screen. And although we’re doing on a shoestring budget, we still managed to do something. And I think it’s a real tip of the hat to the fans as well.

Bill Young: Talking about the fact that there’s almost a five-year difference between the series and now how easy it is for you as an actor to jump back into the character of DI Jack Robinson?

Nathan Page: It was a completely different set of circumstances even though it left off from where the TV series basically ended. Not that you need to watch the series as they survive independently from each other. That said, it was an interesting one. There were no problems really I think because, essentially, with Essie Davis and myself, had no problem just coming together and finding that joyous sense of play. I think if you’ve got that on tap, then it makes the whole process so much easier. That, definitely, was one of the keys to stepping back in.

Bill Young: I think you immediately saw the chemistry on screen. Just riding a bicycle, it was like you never left.

Bill Young: You mentioned the Kerry Greenwood books which the series is based on. When you look at Essie’s character, she’s remains very true to the literary Phryne Fisher. There was a little bit of difference between your character in the books, and the character of Jack Robinson in the series, mainly that you’re single. Did you find it easier as an actor to be able to play the role because there was a difference, as opposed to having to really portray a character that is so defined in the book.

Nathan Page: That’s a really good question. I’m not actually sure but I think, potentially, there’s some freedom in it. For me, when you’re opening up a TV series, of course, who knows where it’s going to end, how much legs its got.  Certainly we didn’t know that it was going to turn up on the big screen.

I think that because he was such a gray matter and barely a peripheral character in the book there’s room to move and shift him but there was a key for me, essentially, and I guess I went my own way with this a little bit in that I wanted him to be a real slow burn or real slow reveal at the risk of making him, at first, insignificant or dull. It was important for me because Essie’s character is so flamboyant and fiery and sort of hydrogen based, whereas I really wanted to keep him more Earth-based and then a slow reveal one part at a time. That was the plan.

Bill Young: Without giving away any of the ending to anybody, which I won’t reveal it but you have to imagine when audiences are watching it, they’re almost standing up and cheering and just saying…finally.

Nathan Page: (laughing) I don’t want to give anything away but…yeah.

Bill Young: No, no I don’t want to do that, but that’s the first thing I thought is like Oh My God, three seasons and finally.

Bill Young: What is it about Phryne Fisher where you have a character like Jack, where there is what seemingly is a lifetime of being toyed with, deceived, betrayed but not in a real sense, but you still can’t resist her,

Nathan Page: I think when they found each other, initially, there was a bit of surprise for both to have this attraction. It’s a slow dance around each other for a long period of time and I think they’re both surprised by that. I think that eventually they both need each other, rely on each other for the very assets that individually they don’t have so it’s a really nice counterbalance of a relationship that’s necessary there.

Bill Young: One of the things that I that I love about all British, Australian and New Zealand television is the ensemble casts are so well put together. Here you have Rupert Penry-Jones, you have Miriam Margolyes. The interesting thing is that as with the series and especially with the feature,  you think of somebody like Margot Wilson, the costume designer, is almost a character in the film, because the costumes are so important. And, you’re getting a suit AND a safari suit. 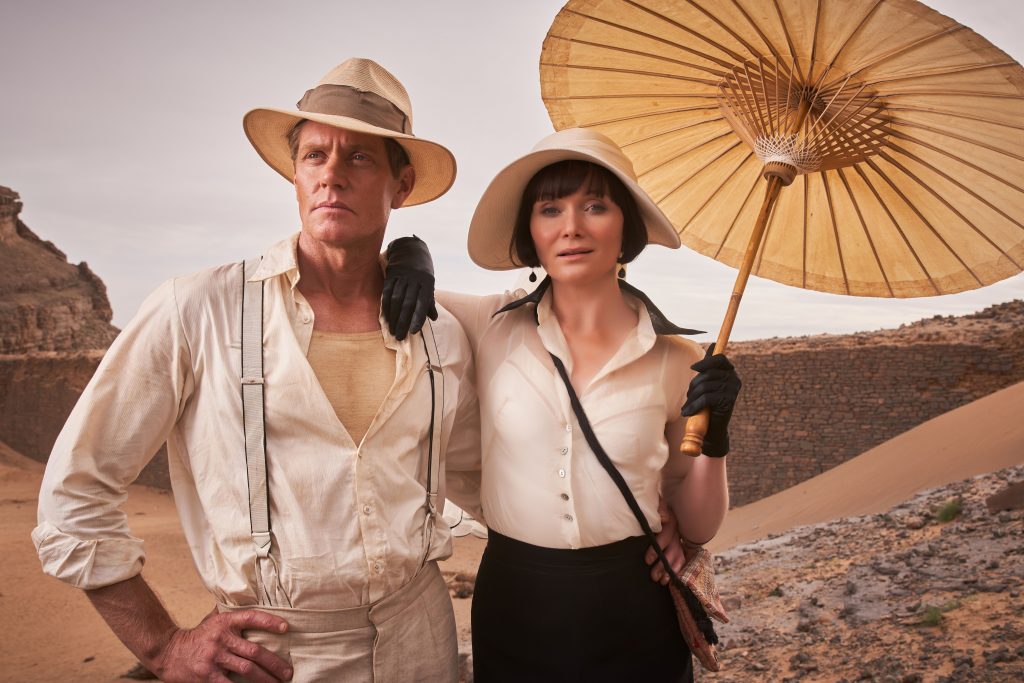 Nathan Page: Yeah, I know! I managed to get another suit! I think you’re right. I think it is a character and that’s the attraction to the 1920s period drama. It’s one of the big ones anyway. Marion Boyce did the TV series so beautifully and then Margo steps up on the film and did a wonderful job. It is another character entirely and I think that that’s one of the attractions to the fan base in that era.

It was amazing to see all these people come from all over the world, descend upon Sydney and particularly Melbourne and they would dress up to the nines. And they had that experience, they came out for the premieres, had the experience and they sort of went into the dark together as a group experience so it’s really the costuming is a big part of that and I think it’s a wonderful community, kind of communal kind of vibe that draws them all together.

Bill Young: Looking at the backdrop of Morocco and the fact you used quite a bit of a local crew. Your first impression of Morocco is that it’s out in the middle of nowhere, which it could actually be in the Sahara Desert but there’s a lot going on from a film standpoint over there.

Nathan Page: I think there is I mean they’re shooting big blockbusters over there. Mission Impossible and so forth so they’re pretty well equipped to be doing a little film like us. It was a pretty amazing experience for us because while they’re shooting for a short period, we got the full scope of it.

It would have been interesting to shoot it the other way around so glad we got to go to Morocco first because what happened was, surprisingly for us, we brought back this momentum for us. Particularly I see myself and the director and the cinematographer, Tony Tilse and Roger Lanser, where everyone had this sort of feel, the momentum was so visceral from coming from Morocco. And it wasn’t lost on us when we got to Melbourne.

I, personally, loved going to Morocco and I’d never been there before and I spent a little bit time in Marrakesh beforehand before filming so essentially my trajectory was while they started filming, I was drinking beers in Marrakesh. Then I had to move my way from the madness of Marrakech eventually, over to complete desert pristine quiet. It was it was quite interesting.

Bill Young: I know you’ve done a fair amount of work in TV, film and stage. Is there anything that you pull from one of the others or are there things that you can pull from a stage work to a feature or TV to feature or feature back to stage?

Nathan Page: I think there’s always those sort of connective tissue between them all. The joy of theater, I guess, is that it’s usually a very whittled down, low budget affair. I’m aware that a lot of a lot of kids coming out of drama school in the US and certainly in Australia just heading to LA without cutting their teeth on the board at all but you know there’s something really, really, there’s a real depth of having to cut your teeth in the theater and hopefully bring it to the screen. I got to experience a lot of that with the actors that I worked on here that we’re doing guest roles beautiful actors, and also on the TV series I got to work with so many beautiful stage actors that hold their own completely on the screen as well so I get to watch them weave their magic.

Bill Young: I want to take a minute on behalf of all Miss Fisher fans to say thank you for bringing this back and I look forward to having everybody see it on the big screen and on AcornTV so I appreciate it very much.

Miss Fisher and the Crypt of Tears streams beginning today on AcornTV.