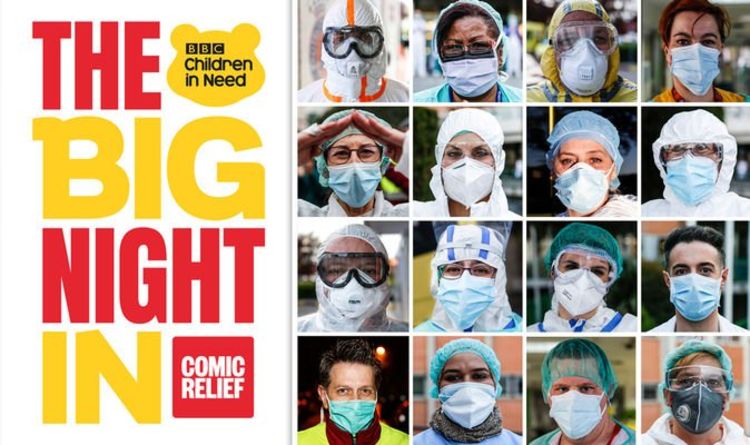 Thursday’s The Big Night In is yet another reason I would live in London at the drop of a hat…as if I needed another one! The 3-hour program brought together Comic Relief and BBC Children in Need for an unprecedented night of comedy on BBC1. Presented by Lenny Henry, Matt Baker, Zoe Ball, Davina McCall and Paddy McGuinness, the one-night charity fest featured stars performing from their own homes and appearing via video link. Here are a few highlights….

A Parish update from Geraldine Granger — The Vicar of Dibley

Extraordinary times call for extraordinary vicars. Dawn French returns as Geraldine Granger with a special lockdown sermon for the people of Dibley. Can you imagine the Dibley Town Council on a Zoom call?

Miranda Hart’s top tips for what she calls, ‘a lockdown’

Miranda Hart looks back at the brilliant Miranda series for some top tips on how to survive a lockdown.

The Doctors say ‘thanks’ to the Doctors

Rob Brydon and Steve Coogan discuss the merits and/or drawbacks of taking a call from Richard Curtis who ‘wants a sketch’.  What ensues is a bit of behind the scenes brainstorming on what the sketch should be. Will we see Bryn from Gavin and Stacey ring up Alan Partridge or will Tom Jones and Mick Jagger join them as knights of the farm?

Peter Kay brings back ‘On the Road to Amarillo’ featuring — the British public!

Peter Kay’s first television appearance in two years with a reboot of his 15 year-old “On the Road to Amarillo” classic sketch starring — Britain!

The residents of Albert Square come together for a lockdown pub quiz.

Little Britain star, Matt Lucas, performs once more his Baked Potato song from the BBC show Shooting Stars. Matt Lucas has called the help of the BBC Concert Orchestra to make an amazing remix and cover of the original Baked Potato song. The maestro and the orchestra have all joined from their homes during this lockdown in order to show their support.

Finding himself locked down with Lord Blackadder and ‘a curious little fellow called Baldrick’, Lord Melchett welcomes William and Kate, the Duke and Duchess of Cambridge, who make a surprise appearance during the BBC’s ‘Big Night In’ to join the UK in cheering frontline workers during the coronavirus emergency.

After the dust settled at the end of the three hours, the first ever collaboration between Comic Relief and Children in Need raised a staggering £27,398,675 with the UK Government offering to double it and take the total to nearly £60 million.