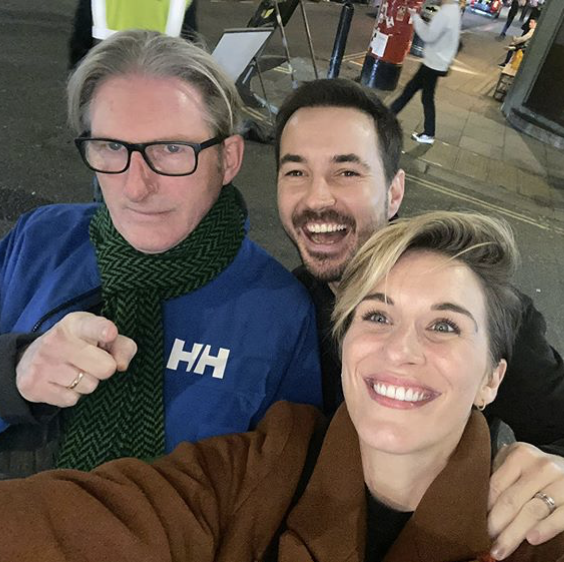 A pre-#StayAtHome pic of AC-12 ‘off the clock’. VICKY MCCLURE / INSTAGRAM

Line of Duty‘s Vicky McClure confirmed recently on BBC Breakfast that series 6 fell victim to COVID-19 because of the government mandated lockdown as filming was shut down six weeks into a 16-week production schedule. That said, she had time to get together with series co-star Martin Compston for a brilliant #StayAtHome message of support and thanks for the tireless efforts of NHS staff, first responders and others on the front line that remain constantly on the minds of AC-12. Sadly, neither Ted Hastings nor the notorious ‘H’ (a bit suspicious, I would say) could make it to the call so we still don’t know who “H” is!

A wee message from AC12 while in lockdown #stayathome

Despite the interruption, McClure did sound excited about the forthcoming series: “We were filming, we were about six weeks into the shoot of 16 weeks, so we’ve got a long way to go yet. But the production were brilliant – while we were filming and it was starting to unfold, we were all doing the necessary precautions and being well looked after, and then it just came to a halt. It had to, as did most things.”

Unfortunately, as with a number of British dramas (i.e. Call the Midwife, Endeavour, Grantchester, etc.), there are so many variables which could affect when any of our favorite shows come back such as actor availability, weather due to the time of year, crew availability and the dreaded funding model.

Let’s hope things get back to whatever the new ‘normal’ will be soon and AC-12 can get back ‘on the job’ ASAP!