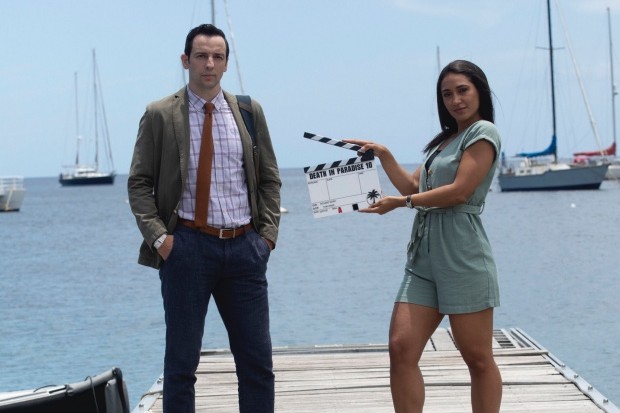 Following a strict UK-industry wide detailed Covid-19 protocol policy that implements various safety measures including social distancing, face coverings and temperature and Covid-19 testing to minimize any risk of infection, cast and crew of Death in Paradise have returned to the French Caribbean island of Guadeloupe to begin filming of series 10 of the popular BBC One series.

In addition to a full-time Covid-19 supervisor on set to make sure the protocols are being implemented correctly, there is a very familiar face returning as Josephine Jobert is set to reprise her role as DS Florence Cassell. Jobert, who left in 2019 after spending four series in ‘paradise’, returns ready to get back to work in the Honoré Police Department after her on screen fiancé’s death two years ago.

Series 10 will see DS Cassell struggle to get to know her new boss Neville Parker, played by Ralf Little (The Royle Family) and his peculiarities. Little,took over for Ardal O’Hanlon mid-way through series 9. DI Parker, somewhat reminiscent of Ben Miller’s character DI Richard Poole in series 1-3, has struggles of his own in his dislike for being on the island with severe allergies, especially with mosquito bites.

According to the BBC, “Neville soon realizes he is existing in the Caribbean, rather than embracing life there. With Florence’s help, he determines to seize the day and finds himself starting to reveal some of his secrets – including of a romantic nature,” the BBC teases. “But is Neville really built for a life in the tropics?  And is a romantic relationship ever going to be possible for him?”

Alongside Little and Jobert for series 10, Don Warrington returns as Commissioner Selwyn Patterson with Tobi Bakare as D.S. JP Hooper and Elizabeth Bourgine as Mayor Catherine Bordey. Tahj Miles (Class Dismissed) joins the cast as 18-year-old petty criminal Marlon Pryce, described as a “ball of energy” who “thinks he knows it all”.

Series 10 was originally set to begin filming in April but fell victim to the UK industry-wide production shutdown due to Covid-19. While the production return of Death in Paradise means that it will be one of the first British dramas to start filming since the lockdown, let’s hope this doesn’t delay BBC One and public television audiences getting to see the return of DS Cassell and more ‘death in paradise’.