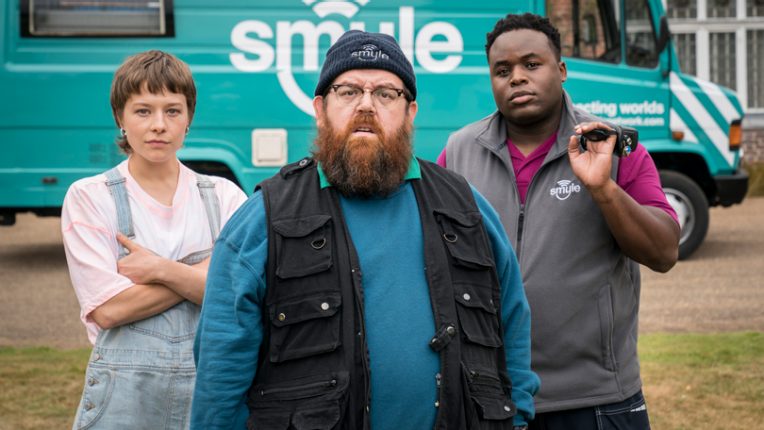 The comedic talents and collective mind palaces of Nick Frost and Simon Pegg are reuniting for the supernatural comedy series, Truth Seekers. The 8-part Amazon Prime series marks the most recent collaboration between Frost and Pegg, both of whom gained worldwide attention for working with writer-director Edgar Wright on three films that made up the Three Flavours Cornetto trilogy, Shaun of the Dead, Hot Fuzz and The World’s End.

In Truth Seekers, Frost stars as the leader of the paranormal investigator team, which slowly uncovers “a conspiracy that could bring about Armageddon for the entire human race.” Pegg also stars in the series alongside Samson Kayo, Malcolm McDowell (A Clockwork Orange), Emma D’Arcy, and Susan Wokoma.

Truth Seekers centers on a pair of paranormal investigators who “take out haunted churches, underground bunkers, and abandoned hospitals using an array of homemade ghost-detecting gizmos and share their adventures on an online channel.

The first footage, which just recently debuted online in conjunction with the San Diego Comic-Con thanks to Amazon Prime Video, pushes all the right buttons of with ghost hunters, demons and haunted houses which means Frost and Pegg have gotten the band back together and you quickly realize it’s been too long.

Tellyspotting caught up with Pegg and Frost back in 2013 in advance of the premiere of The World’s End where they talked about what shaped their love of cinema from an early age. I first came across the greatness that is Pegg and Frost in Spaced. Pegg and Jessica Hynes co-wrote the series, which was partly based on Pegg and Frost’s lifestyle at the time, and actually wrote a role for Frost in the cult comedy classic.