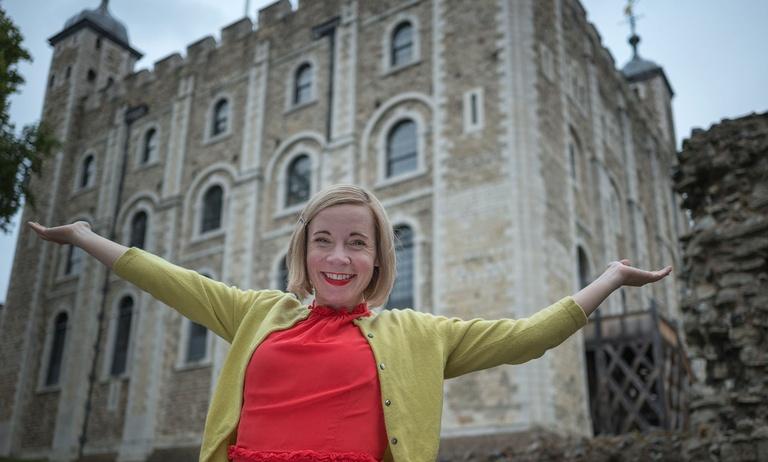 As Chief Curator of Historic Royal Palaces, Lucy Worsley, takes us behind closed doors to explore the Tower of London, Hampton Court and Kensington Palace in Lucy Worsley’s Royal Palace Secrets, tonight at 7:30pET/6:30pCT on PBS. While millions flock to visit these extraordinary royal palaces every year, 2020 is in the middle of a global pandemic which caused doors to be shut and their treasures locked away. Lucky for us, Lucy’s job means she’s got the keys.

We had the great good fortune to be able to sit down for a few minutes with Lucy before she unlocked the doors to reveal a few secrets. What a gift she is to history lovers worldwide.

Tellyspotting: While filming during a pandemic certainly had its challenges, did it allow you to showcase something really awesome at each of the individual palaces that might not have otherwise been accessible?

Lucy Worsley: Well on a busy day the Tower of London might have as many as 13,000 people visiting it!  Simply not having those bodies onsite meant we had an extraordinary opportunity to see the place in all its glory.  And also, having the keys and run of the place, I was up on the roof, down in the dungeons, just accessing all area!

TS: With the Tower of London, as much as it was William the Conqueror making a statement to the people of England, was it not also a statement maker to the rest of the world?

LW: I think William the Conqueror’s first task was to subjugate his new subjects on this island – although you’re dead right he lived in European world, and had his eye closely on what the Vikings and his other rivals were up to.  But his immediate priority was to shock and awe London and Londoners. 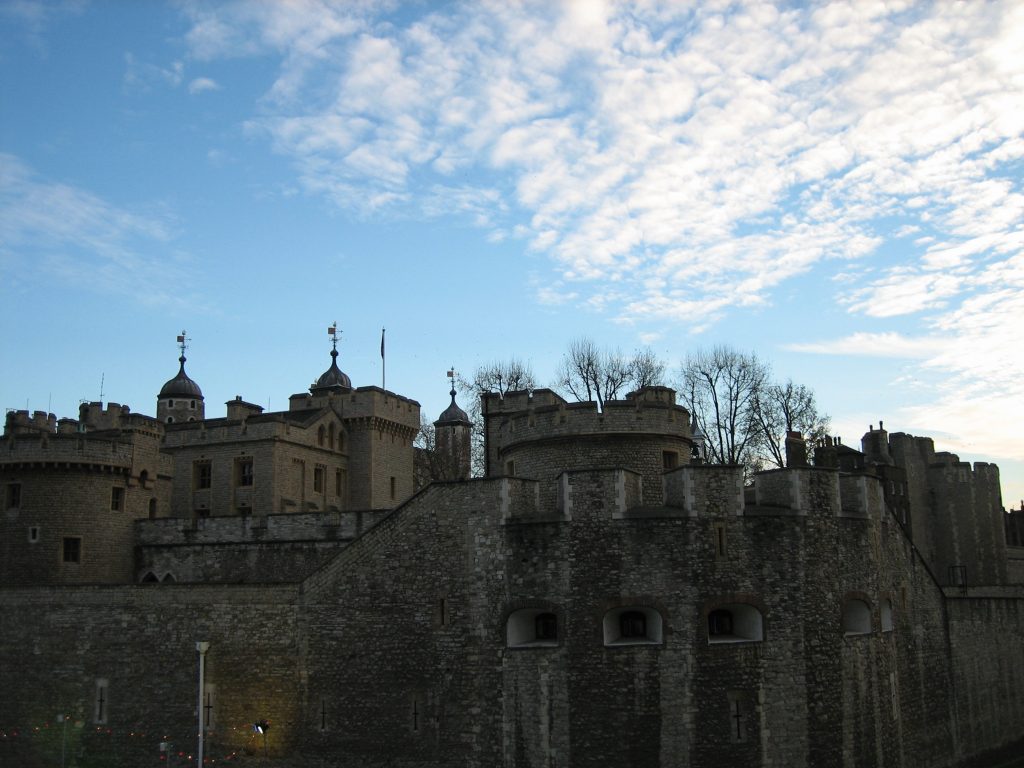 TS: As Chief Curator of the Historic Royal Palaces, aside from being in the enviable and/or unenviable position of getting to feed dead mice to the ravens, did you ever think you would become a ‘raven whisperer’?

LW: I’m a bit squeamish so handling dead mice was a bit of a challenge!  And I wouldn’t dare to call myself a ‘raven whisperer’: my colleagues Team Raven among the Yeoman Warders deserve that soubriquet for themselves.  But you’re correct to guess that hang out at the Tower of London, after hours, with the ravens, is an extraordinary privilege I could never have predicted for myself.

TS: Given the history of the Tower of London, there has to be a few ghosts running throughout the fortress….

LW: In the programme I get the chance to play the part of one of the most famous ghosts of Hampton Court, Queen Jane Seymour, who died there shortly after having given Henry VIII the son he’d longed for.  But I’m afraid I do rather undercut the spookiness of the ghost by speculating that maybe the palace authorities ‘encouraged’ sightings of it in the nineteenth century as a boost to the palace’s reputation as a tourist attraction. 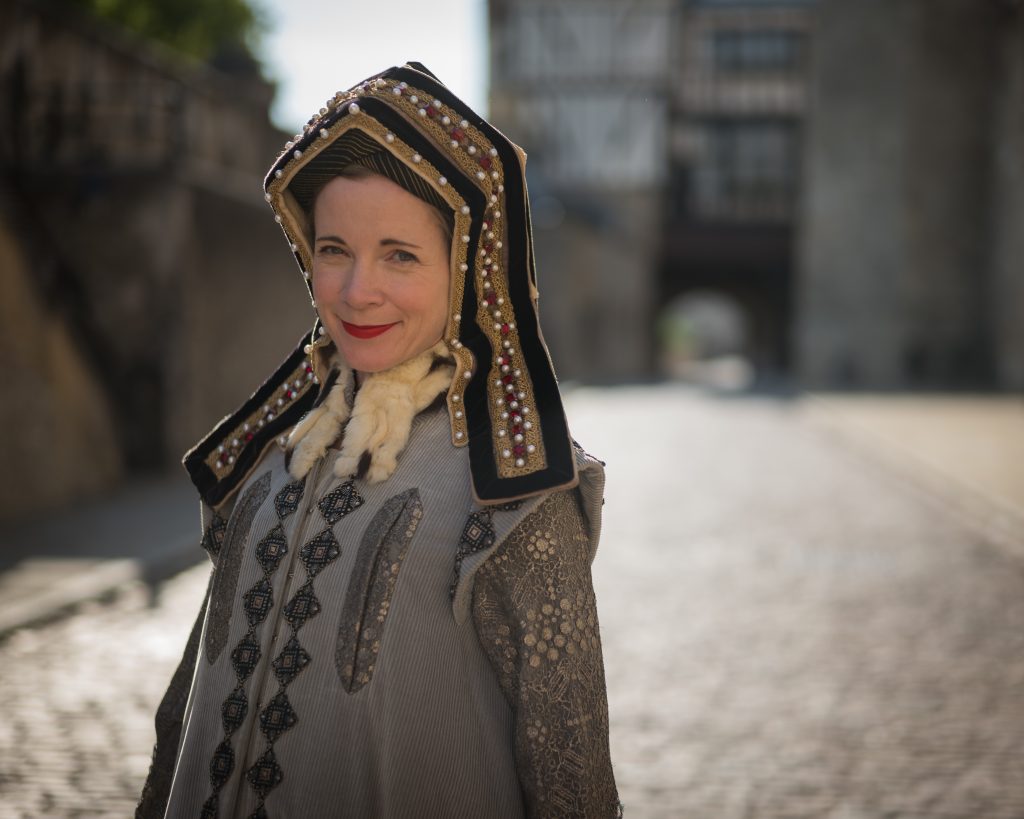 Lucy Worsley dressed as Anne Boleyn at the Tower of London. Photo: PBS

TS: Has there ever been anything you’ve stumbled across over the years in your position as Chief Curator that has either surprised you or caused you to want to immediately ring someone to say ‘you are not going to believe this’?

LW: Almost every day something new astounds and amazes me!  The best thing about my job is that every day I’m learning something new about history.  One of the most exciting things we do is to make new acquisitions for our collection of dresses, artefacts and other treasures.  Sometimes, when we win something at auction, I’m literally not allowed to ring anyone to say ‘you are not going to believe this’ because we’re waiting on a formal press release to be issued! 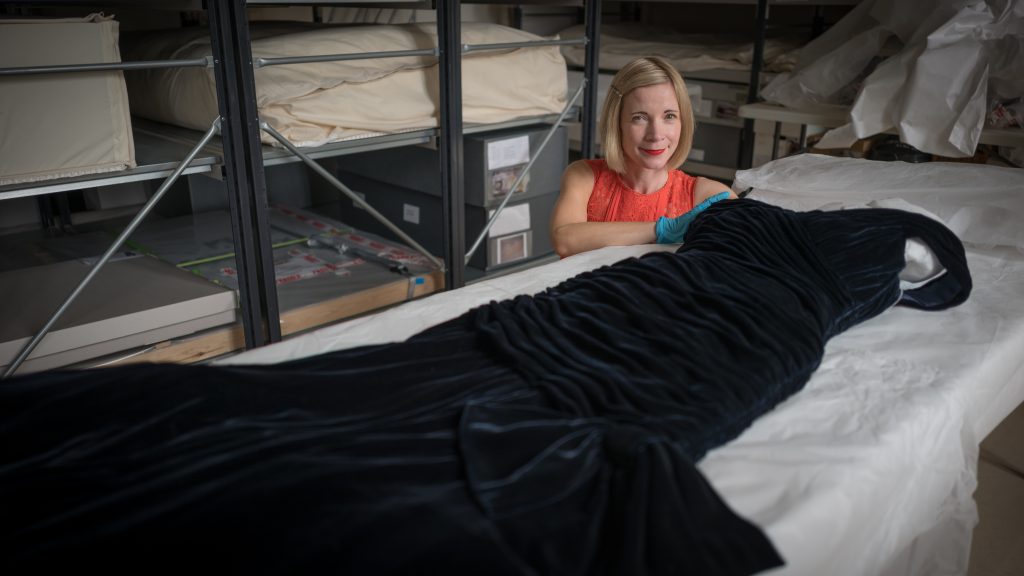 Lucy Worsley with the velvet dress worn by Princess Diana when she danced with John Travolta. Photo: PBS

TS: Once the palaces ‘re-open for business’, what is one ‘must see corner of the building’ for each palace that visitors should not miss the opportunity to see that still gets you charged up?

LW: At the Tower of London, of course don’t miss the Crown Jewels.  At Hampton Court, I suggest you look for Chapel Court, a tranquil little courtyard that most people overlook.  And at Kensington Palace, my particular favourite is the King’s Grand Staircase, where you can spend hours puzzling out the identity of 45 Georgian courtiers painted on its walls.

TS: You talk of the death of Diana as being a watershed moment with regards to the relationship between the masses and the monarchy. Do you see this continuing today with the new generation of royals?

LW: Diana, Princess of Wales certainly had a special, close, warm relationship with the people of Britain, and indeed the world, that she cultivated through her informal, natural way of interacting with people.  Her children and their families certainly share that way of stepping down from the pedestal and acting as human beings. 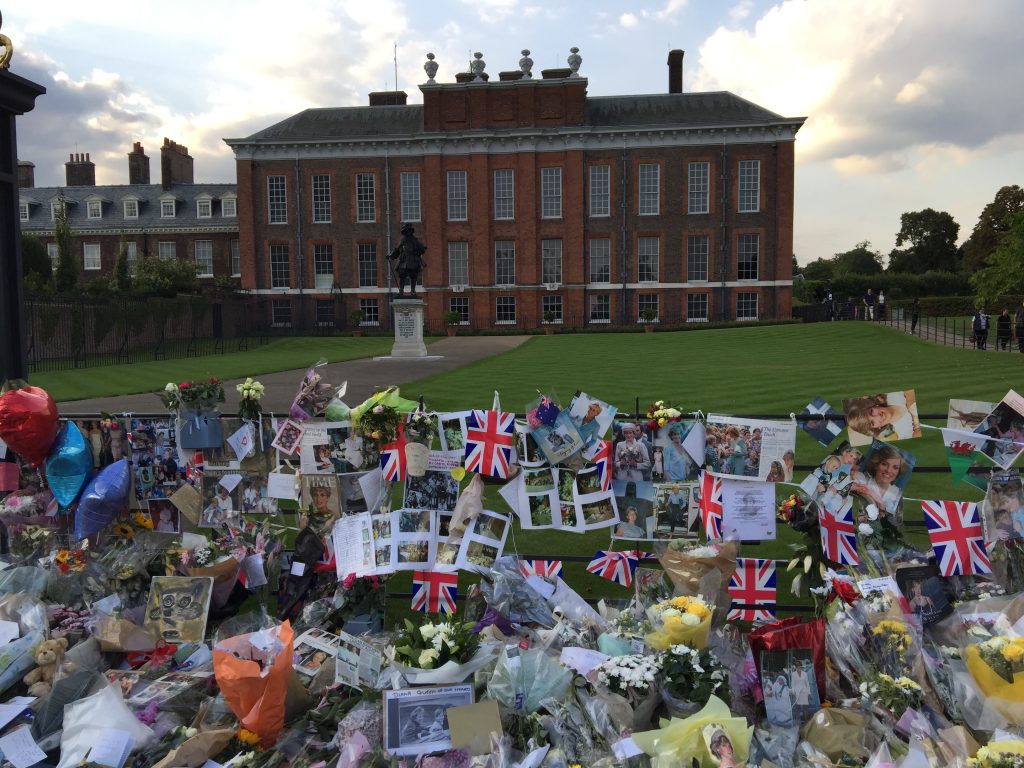 TS: In your programs, you have definitely achieved your desire to ‘make history fun’. Early on, who made history fun for you? Where did the interest in history come from?

LW: Ooh: lots of people, my mum, various history teachers I remember very fondly, and also, particularly the authors of historical novels for kids.  Although they masquerade as entertainment, historical novels or TV shows or films are a great way to get kids to step over the threshold and into the world of the past…

TS: After all you’ve come across in your digging through history, is there one era that intrigues you more?

LW: It’s always the one that my current project has taken me to!  At this particular moment, I’m well out of my Tudor comfort zone, and I’m doing some research about the year 1940 and London’s experiences in the Blitz.  Every day’s a school day for me, but every day is fun.