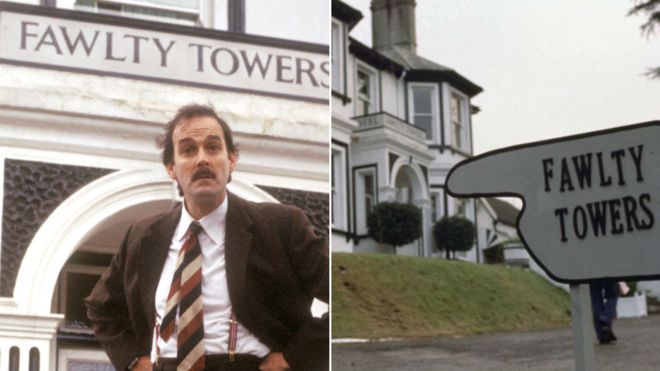 On Saturday, as Planet Earth quietly celebrated the 45th anniversary of Fawlty Towers, series co-creator/co-writer John Cleese posed a question on Twitter to which the ability to come up with an answer is next to impossible, if not impossible. Easily the funniest comedy of all-time, the 12 episodes (yes, there were only 12) are wall-to-wall comprised of brilliant line after brilliant line as Cleese used the 45th to point out he still hasn’t hung the picture to this day.

45 years later and I still haven’t hung up the picture. Fawlty Towers premiered on this day in 1975. What was your favourite line? pic.twitter.com/LobwR6LXjo

As Cleese recalled the broadcasters initial response to the series when the cast gathered some years ago for its 30th anniversary, the series was originally dismissed by the BBC as ‘dire’ and ‘not something that would appeal to viewers’. “There is a famous note which I have a copy of, I think it’s framed. Connie and I wrote that first episode and we sent it in to Jimmy Gilbert, remembered Cleese.

“The fellow whose job it was to assess the quality of the writing said, and I can quote it fairly accurately, ‘This is full of clichéd situations and stereotypical characters and I cannot see it as being anything other than a disaster’. And Jimmy himself said ‘You’re going to have to get them out of the hotel, John, you can’t do the whole thing in the hotel’. Whereas, of course, it’s in the hotel that the whole pressure cooker builds up,” Cleese continued.

The work that Cleese and then wife, Connie Booth, put into each script is evident from start to finish with some episodes taking up to four months to write and required as many as ten drafts until they were satisfied. Series 1 premiered on September 19, 1975 and series 2 some four years later in 1979 following the couple’s divorce a year earlier.

If you don’t believe me, take the word of Dr. Helen Pilcher, a British molecular neurobiologist by day and stand-up comic by night. Pilcher and her team of research scientists analyzed almost two decades’ worth of British comedies and actually came up with a mathematical expression for success, and failure. It’s quite simple.  A sitcom is a success if it scores high marks when applied to the following formula. [((R x D + V) x F)+ S]/A.

In addition, a 2000 British Film Institute study selected Fawlty Towers as the best British television show, a year-long BBC poll looking for Britain’s Best Sitcom, showed Fawlty Towers ranking as the fifth best sitcom of all time by British viewers and even Fawlty Towers, the hotel itself, was voted #1 in a poll Hotels.com conducted to determine the all-time most memorable screen hotels.

Oh, before I forget…my favorite line actually involves a brief exchange between Basil and Sybil and how they refer to each other. For Basil, Sybil was “a rancorous coiffeured old sow” while Sybil called Basil “an ageing brilliantined stick insect“. Oh, and there’s also, “Don’t mention the war. I did once but I think I got away with it.” Or, there’s the time when one of the hotel guests asked if there was anywhere ‘they do French food’, Basil responds with, “Yes, France, I believe. They seem to like it there. And the swim would certainly sharpen your appetite. You’d better hurry, the tide leaves in six minutes.”

Or, how about when Mrs. Richards complained of a fairly boring view out her window, Basil responded with, “Well may I ask what you expected to see out of a Torquay hotel bedroom window? Sydney Opera House perhaps? The Hanging Gardens of Babylon? Herds of wildebeest sweeping majestically…”

Well, you get the idea. How about you, what are your favorite lines in the funniest sitcom of all-time?