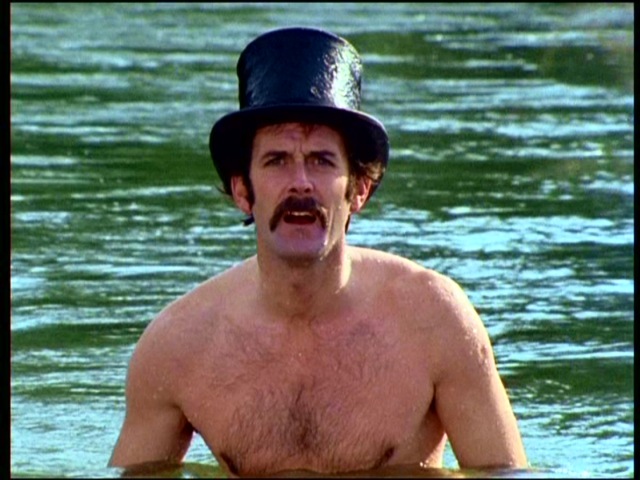 Unfortunately, for most of 2020, days seem to run together and it seems more like Groundhog Day with each day pretty much like the previous one and where weekends are a thing of the past. Full disclosure – I was so psyched that Peter Davison was going to guest star on the upcoming Call the Midwife Christmas Special that I completely forgot it was Friday and time for our weekly Friday Funny. So, here it is, your Friday Funny — the Saturday edition.

For this week’s ‘Friday Funny’, we turn to the clocks back to 1974, in the early post-Monty Python’s Flying Circus era, and a charming little one-off special, Romance with a Double Bass which was written by John Cleese, Connie Booth and Bill Owen. Unfortunately, it is light years apart from the previous Cleese/Booth collaboration of Fawlty Towers opting for a steady diet of physical humor over dialogue. That said, the fact that it’s based on the short story of the same name by Anton Chekhov, it’s charming, quaint and quintessentially British.

Smychkov (Cleese), a bassist, shows up too early for the betrothal ball of a beautiful princess (Booth), and decides to spend his extra time skinny dipping in the nearby lake. The princess, unbeknownst to the bass player, has gone fishing at the lake. She later decides to go skinny dipping as well. However, things change when a thief absconds with both Smychkov’s and the Princess’s clothes, and while the Princess is wandering around, she meets Smychkov. After their initially embarrassing encounter, Smychkov helps the princess to preserve her dignity by transporting her back to the castle in his bass case. All is not for naught, however, as along the way they discover they have feelings for each other.

So, here it is, your Saturday edition of the Friday Funny for this week with heavier emphasis on ‘Friday’ than ‘Funny’. Either way, it’s worth a look.