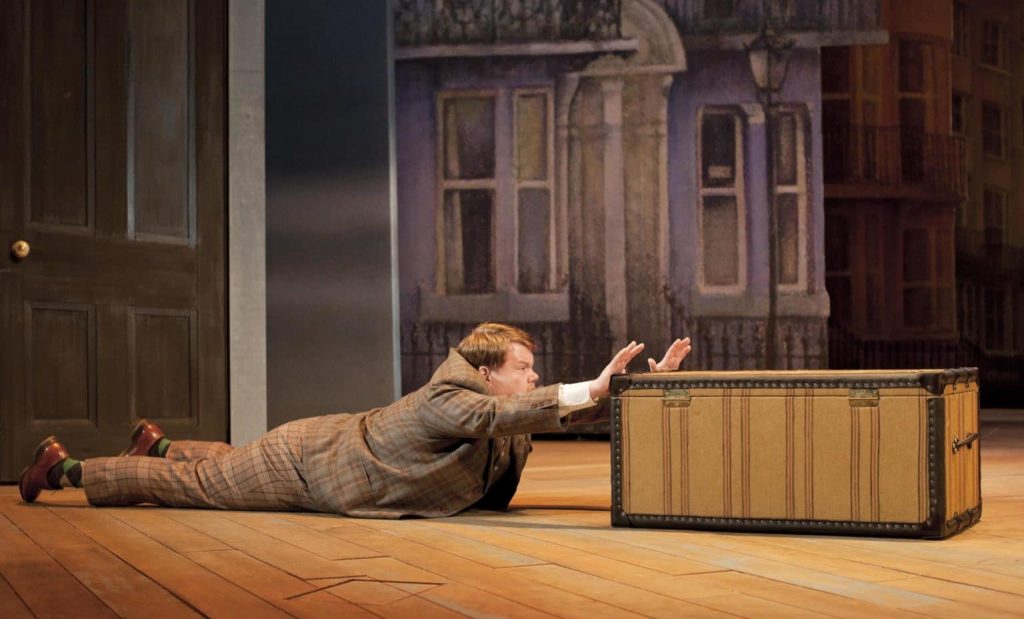 Just like Auntie Mame talked of the world ‘needing a little Christmas’, it seems like the world’s ability to make it through the remaining weeks of 2020 is going to hinge on ‘needing a little funny’ very soon. PBS has just that tonight with the premiere of One Man, Two Guvnors on Great Performances.

U.S. audiences will finally get the chance to see a pre-The Late Late Show James Corden tonight with the premiere of One Man, Two Guvnors at 9pET/8pCT on PBS.  James Corden’s return to Broadway in One Man, Two Guvnors is based on Carlo Goldoni’s 18th-century farce, The Servant of Two Masters Playwright Richard Bean and director Sir Nicholas Hytner have updated the setting to the British seaside town of Brighton in the early 1960’s for this new effort.

Airing on Great Performances as part of their on-going ‘Broadway’s Best’ series, the Tony Award-winning comedy debuted at UK’s National Theatre with subsequent productions in London’s West End and on Broadway in 2011 and 2012.

Set in the British resort town of Brighton during the Swinging ’60s, the manic plot centers on an out-of-work musician named Francis Henshall (Corden) who becomes a bodyguard-minder to Roscoe Crabbe, a petty East End crook. Little does he know that “Roscoe” is actually his own sister, Rachel, now masquerading as her dead brother, who’s been killed by her boyfriend, Stanley Stubbers.

To complicate matters even more, when the perpetually ravenous Francis sees the chance for an extra meal ticket, he takes on a second job with Stanley, who is hiding out from the police and waiting to be reunited with Rachel. To prevent discovery, Francis must keep his “two guvnors” apart, an increasingly difficult predicament resulting in comic mayhem, and providing Corden with the opportunity for a series of spectacular sight gags and pratfalls.

One Man, Two Guvnors is a perfect vehicle for Corden to showcase his comedic talents that don’t shine near enough in his current gig on CBS’ “The Late Late Show” and PBS is the perfect vehicle for the best in arts programming whether it be from Broadway, Lincoln Center, Metropolitan Opera, Kennedy Center, Carnegie Hall or any venue across the United States.