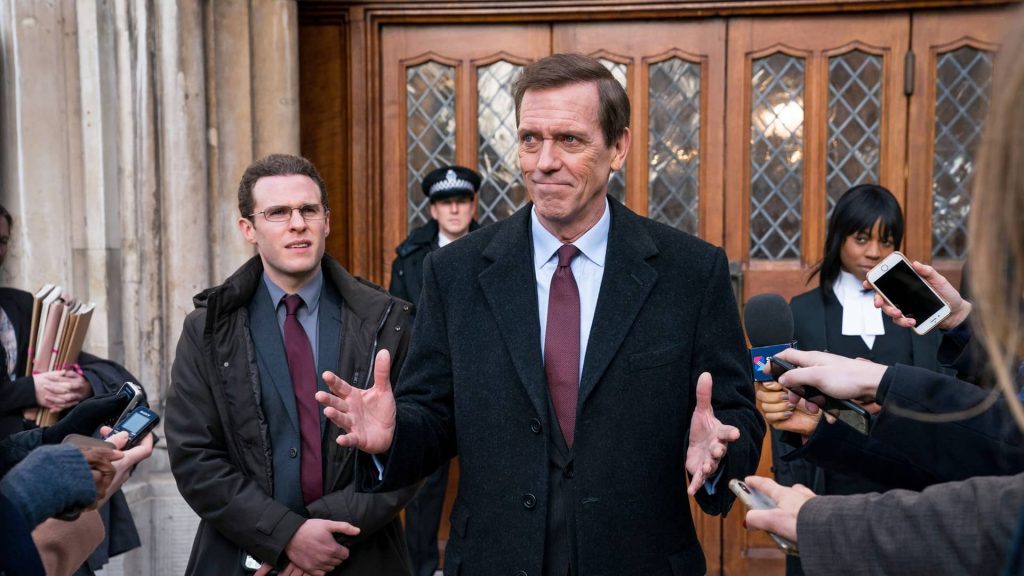 Describing the show as “…a political drama about the price of success in the political realm and what it demands of the people who do it and those around the person who does it. It’s pretty unforgiving”, Roadkill ‘s, Hugh Laurie stars as Peter Laurence, a self-made forceful and charismatic ‘Conservative Party’ politician. Shamelessly untroubled by guilt or remorse as he juggles his desire to further his own agenda, the morally questionable Laurence continues to be picked apart by his enemies who continue to plot to bring him down keeps getting in the way and threaten his ambition for the future.

David Hare’s carefully crafted script “…allows the characters the time to reveal themselves piece by piece rather than coming in with a trombone announcing themselves thus giving the audience the ability to decipher things rather than present it to them in bold,” said Laurie. In this newly released video by PBS’ Masterpiece, Hugh Laurie (Jeeves & Wooster, Blackadder, Veep, The Night Manager, House), Helen McCrory (Peaky Blinders, The Queen, His Dark Materials), Pippa Bennett-Warner (Harlots, Gangs of London, Inspector Lewis, Miss Marple) and more describe the characters they bring to life in the new political thriller.

As is usually the case with British dramas, there are a significant number of ensemble cast members surrounding Hugh Laurie in Roadkill that might have you scratching your head saying ‘where do I know that person’ including Ophelia Lovibond (W1A, Elementary, Rocketman) as Susan Laurence, Patricia Lodge (Rumpole of the Bailey, Miranda) as Lady Roche, Caroline Lee-Johnson (Chef!) as Bella Gayle, Pip Torrens (Poldark) as Joe Lapidus and Kate Lamb (Call the Midwife) as Lindsay Storm.

If you happened to miss last Sunday’s premiere of Roadkill on PBS, here’s a bit of catch up before episode 2 tonight. Peter Laurence is a charismatic government minister on the verge of promotion to high office. He is also celebrating a win in a newspaper libel case. But an inmate at a women’s prison claims to have a secret about Peter’s past that could affect his future. Now you’re ready for tonight at 9pET/8pCT on PBS.

The 2nd installment of Roadkill airs tonight at 9pET/8pCT on PBS as part of Masterpiece.