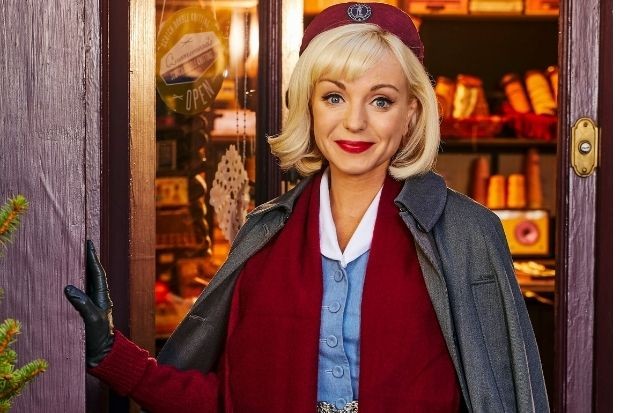 Just a quick follow-up update regarding the forthcoming Call the Midwife Christmas Special that airs Christmas Day on BBC One and PBS. This first, first look clip was released Wednesday morning on ITV’s This Morning program. Thanks to the official CTM Twitter feed for recognizing there is a whole world of fans around the globe that are outside ITV’s transmission reach.

Our first Christmas clip!! For those of you unable to catch the exclusive premiere of this Christmas preview clip on ITVs @ThisMorning earlier – here it is!! 😁😁😁🙌🎄🎅 #CallTheMidwife returns with our brand new Christmas Special on Christmas Day: 7:40 on @BBCOne, 9pm ET @PBS pic.twitter.com/pAOm2B3dxR

The first-look footage for the upcoming episode, hints at what’s in store for Trixie this holiday season – and from the looks of it, it’s pretty clear it wasn’t on her Christmas list.

As we know, the year is 1965 and, as you can gather in the video, Poplar’s favorite nurses are gearing up for the festive season when a knock on the door interrupts them. Trixie (Helen George), eager to receive her annual dress allowance from her Godmother, hurries to greet the postman. But she’s disappointed to find the letter contains a subscription to a “marriage bureau” rather than a chance at some new outfits.

The Call the Midwife Christmas Special airs Christmas Day on BBC One and PBS.