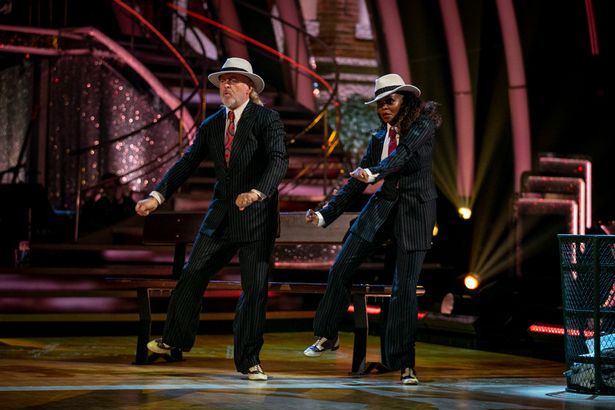 A very familiar face (i.e. Bill Bailey) is taking home the Glitterball trophy from the 2020 Strictly Come Dancing competition which just concluded Saturday evening in the UK. The awesome thing is, that the familiar face to most people in North America comes from his time on the brilliant Dylan Moran comedy, Black Books. Bill Bailey was equally as brilliant as Manny Biannco, the bookshop’s assistant. How can anyone forget our early introduction of the angst-ridden accountant in desperate search of The Little Book of Calm in the first episode!

In ‘real-life’, Bailey appears to be the hardest working man in show-business with his frequent appearances on panel shows such as Never Mind the Buzzcocks, Have I Got News for You and QI, along with his numerous stand-up performances where he incorporates music throughout the evening by playing a variety of musical instruments. For his time on Strictly, it began as a bit of an uphill battle as, by winning the ultimate prize, Bailey became the oldest winner in the show’s history by over a decade as the previous ‘oldest winner’ was a spry 42! The 55-year-old Bailey shared his triumph with partner Oti Mabuse, the first Strictly dancer to win for two years in a row.

“It feels surreal, it feels extraordinary, it feels wonderful,” Bailey said as he was named the winner. “I never thought we’d get this far, never thought we’d get to the final. The partner’s were equally effusive over the other’s contribution and effort that ended with the 2020 crown.  “I have had the most extraordinary teacher and the most extraordinary dancer,” said Bailey, paying tribute to Mabuse. “Someone who believed in me right from the beginning, and she found something in me and turned me into this, into a dancer.” In response Mabuse told him: “I think you are amazing, remarkable. You just put your heart and soul into everything. Thank you for being a friend, a father figure to me, a brother, and for this [the glitterball trophy]!”

Not wanting to become the 2020 competition’s novelty contestant, Bailey remained focused and really put in the hours to learn some pretty complex dance routines and definitely got better each week until it ultimately paid off with Saturday night’s victory.

Congrats, Manny (a.k.a. Bill Bailey). One can only imagine what Bernard Black would say….