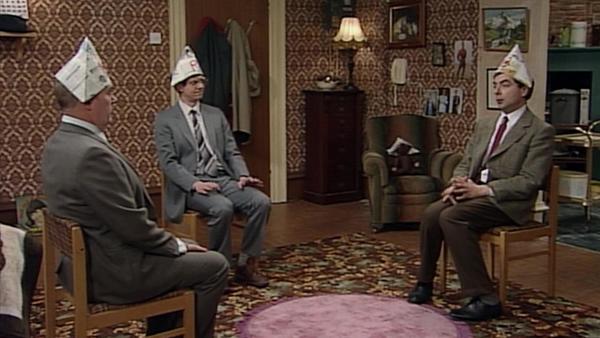 Fresh off a quiet but rather ‘challenging’ Christmas Day celebration, Mr. Bean turns his efforts on New Year’s Eve, hosting a party with his friends Rupert and Hubert, fully equipped with party hats, music and some homemade snacks and drink. Unfortunately, his decorations amount to a circle of chairs in the living room and a bunch of balloons hanging from the front door.

From a food standpoint, he finds he has almost run out of Twiglets, and must improvise by chopping up a branch outside his kitchen window with a butcher knife and dipping the twigs in Marmite in an attempt to disguise them (Yum!). He then opens a bottle of Champagne, but discovers that there is only enough to fill half a glass. As Rupert and Hubert wait in the living room, he improvises again by using a bottle of vinegar and adding sugar to sweeten it.

Unfortunately for Mr. Bean, his neighbor is throwing a bit more lively NYE party. The new year can’t get here fast enough for Rupert and Hubert as they secretly speed up the clock to just before midnight, quickly toast the arrival of 1994, say their goodnights and head across the hall to a much more festive party. Thinking the new year has come, Mr. Bean and Teddy then head to bed, missing the festivities across the hall entirely as the real countdown to Auld Lang Syne begins.

While the New Year’s Eve party can probably be deemed a failure as far as parties go, New Year’s Day did have its consolations. Not to be deterred, Mr. Bean goes in search of that elusive New Year’s Day bargain deciding to kick off the new year with a few do-it-yourself home improvements that result in a bit of a rearrangement of the furniture and most of Mr. Bean’s possessions.

With a new armchair in tow, Mr. Bean attempts a little redecoration to accommodate his new acquisition. He decides to paint his room by covering everything in newspaper and using a firecracker to blow up a paint can and paint his room. Unfortunately, the resulting explosion makes it a year to remember after only one day into the new year!

Disclaimer: FYI, no animals were harmed in the filming of this episode. Teddy is fine. And, please remember, Mr. Bean is a professional. Do not try this at home.