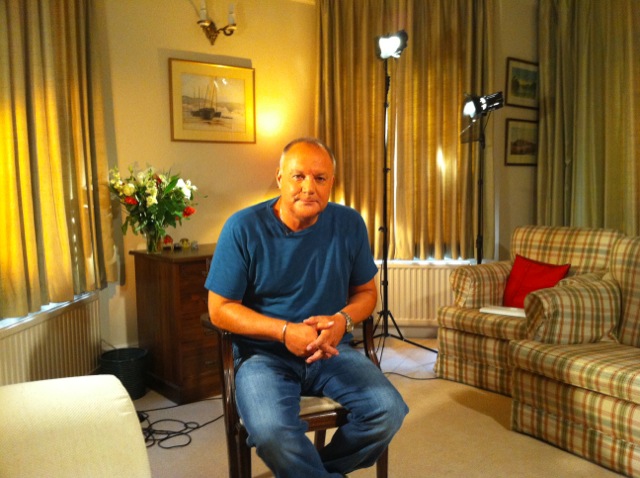 Admittedly, there has been little, if anything, to celebrate since Monday, March 16, 2020, the day that most of America started working from home. That said, the time that it has given fans of British comedies to either revisit their favorite British comedy series or uncover a previously undiscovered gem is one of the few saving graces of a really challenging year. For me, it was time to revisit Mulberry, the 2-series comedy gem from the writing duo of Esmonde and Larbey.

There are times that BBC commissioning folks get it right and times they don’t. Mulberry was one of those “didn’t get it right” moments in British comedy history. After two wonderful seasons (13 episodes) with brilliant scripts by Bob Larbey and, then, writing partner, John Esmonde and a wonderful cast headed by Karl Howman in the lead role, the series was abruptly halted without much of an explanation from the BBC prior to the beginning of production on series 3.

We caught up with Karl back in 2010 for our British comedy writers program for PBS. Karl spoke at great length about Bob and John and what it meant to him, personally, to have a series such as Mulberry where the lead part was written specifically with him in mind from a casting standpoint from the beginning. Karl and Bob had become close friends over the years through their work association on mid-70’s series, Get Some In, followed by A Fine Romance, then Brush Strokes.

It was Mulberry, however, that attracted me to the talents of Karl as the apprentice Grim Reaper sent to get Miss Farnaby, played by the great Geraldine McEwan. The sentimental / comical side of Mulberry, armed with a true love of life and laughter, attempted to make Miss Farnaby’s last days on Earth, happy ones before taking her hand and walking across the bridge to the other side.

In the interview, Karl also spoke not only about the importance of the writing to the success of a British comedy, but about the process of how Bob Larbey and John Esmonde wrote and, specifically, Bob’s keen sense of observation when developing characters for his series.

Mulberry was their last series together writing as a duo. Bob later went on to solo write As Time Goes By, which starred Dame Judi Dench and Geoffrey Palmer. For the same PBS special, we had the great good fortune to interview Bob Larbey and the even greater good fortune to hear directly from him how he would have ended one of the sweetest British comedy series of all-time. Judging from the emotion, Mulberry was one of his favorites.

As Time Goes By, Keeping Up Appearances, Are You Being Served, Good Neighbors, Last of the Summer Wine. All a part of our lives for a number of years and a number of seasons. The one thing, however, that most of these British comedy classics had in common is that they all ended on their own terms. Going in to the final season, both writers and actors knew going in that it was the end.

The one series that comedy commissioners ‘didn’t get right’ was Mulberry. With only 13 episodes, it’s well worth the investment of 6.5 hours of your time. Great writing, great cast and a really sweet story. And, now, when you get to the non-ending, you’ll know how it was meant to end. Enjoy.