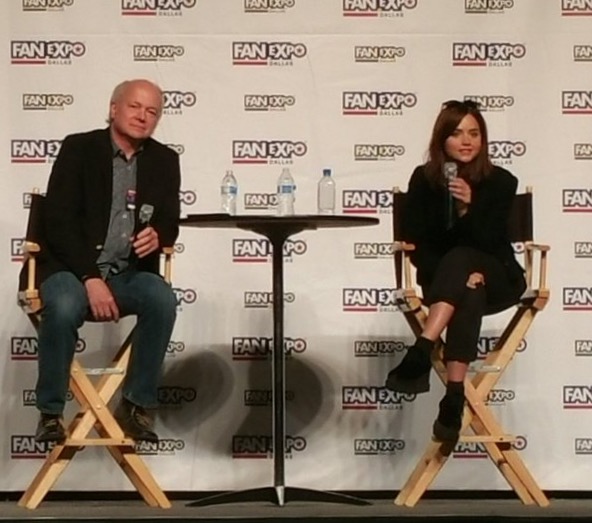 Much like I have come to believe David Tennant is the hardest working British actor on the male side, I’m now convinced that Jenna Coleman holds that distinction on the female side. Coleman became a household name back in 2012 as Matt Smith’s traveling companion, Clara Oswald, in Doctor Who following an early soap stint on Emmerdale and the BBC school-based drama series, Waterloo Road.

Coleman ended her time in the TARDIS in 2016 in order to play a young Queen Victoria in the PBS/ITV series, Victoria. With three series in the books, fans are still holding out hope that Coleman (Victoria) and Tom Hughes (Prince Albert) will sign on for a fourth series of the Daisy Goodwin period drama at some point.

Coleman’s newest effort, announced on Deadline, has her taking on the role of Joan Bright, the woman who started WWII as a secretary and ended it organizing the great Allied conferences, in The War Rooms. The series will explore the untold story of the women who lived, loved and triumphed in Winston Churchill’s secret Whitehall bunker.

Bright is a former girlfriend of James Bond author Ian Fleming and was thought to be one of the inspirations behind Miss Moneypenny with her memoir, The Inner Circle: A View of War at the Top, being optioned for the series. While casting is yet to be determined, star power will definitely be on display on both sides of the camera as Coleman will also serve as executive producer alongside Simon Mirren (Spooks) while David Parfitt, fresh from winning two Oscars on Sunday for The Father, will produce the David Chidlow (Moving On, All or Nothing: Manchester City) created series.

“Joan Bright was never going to live a conventional life — a young woman who lived her war days under the official secrets act, undercover and underground in the war rooms,” Coleman said. “This story is so compelling not only because of her unique and liberal mind, wryness of spirit and curiosity to live, but because of the opportunity to examine this endlessly fascinating period of time through an intimate and human lens.”

“The closeness and proximity of days and nights lived within this small space, the carriers of the truth amidst the oblivion of propaganda above. The beauty and fragility of human connection when living through a time when no one knows what tomorrow will bring,” said Coleman. “I’m so excited to unearth these hidden lives and at a time where it feels so shockingly relevant right now.”

As awesome as The War Rooms reads, the unfortunate underlying, hidden message in this announcement is that this just means that fans wanting a fourth series of Victoria will have to wait just a little longer.