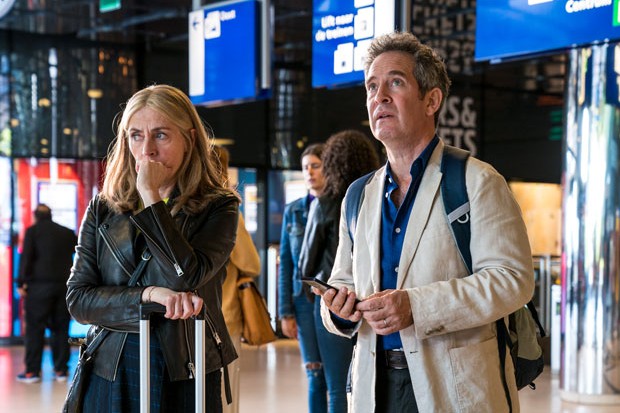 Quality drama continues to come our way on PBS as David Nicholls’ Us successfully skirted the coronavirus pandemic lockdown and is set to transmit beginning tonight (20 June) and next Sunday at 9:00pET/8:00pCT.

Douglas Petersen’s (Hollander) day isn’t starting off too well when he is blindsided by his wife Connie (Reeves) who tells him that she’s not sure she wants to be married to him anymore….as in ‘trial separation without the trial’. Agreeing to still go on their planned once-in-a-lifetime journey to some of the most beautiful cities in the world as a family, Douglas vows to win back the love of his wife and repair his troubled relationship with their son Albie (Taylor). Unfortunately, Connie has other plans as just before the epic holiday, Douglas’ grand scheme suffers a slight hiccup: Connie tells them their 25-year marriage is over.

Douglas probably feels a bit like he’s starting the trip with two strikes against him with a third strike headed his way when, during the trip, Albie meets Kat (Graham), a free spirit who crashes the family holiday and tests Douglas’s efforts to be a newly fun and relaxed husband and father.

Filmed in London, Amsterdam, Venice, Barcelona and Paris, the 4-part drama also jumps back to the past where viewers will see how a younger Connie (Bramhill) and Douglas (DeCaestecker) first met.

Us was published in 2014 and was long-listed for the Man Booker Prize. Nicholls said of the series: “It’s a huge thrill to see the novel come to life, and with such a wonderful cast and production team. We want to make something funny, touching and beautiful, to really explore marriage and family life, all against this incredible backdrop.”

Us premieres tonight as part of the PBS Masterpiece series beginning at 9:00pET / 8:00pCT.