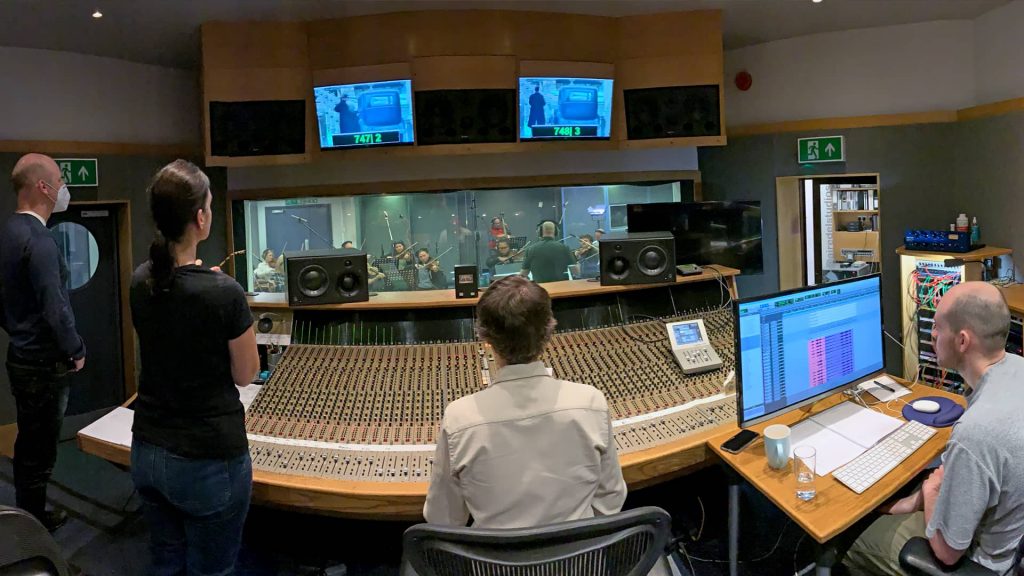 When one thinks of the key elements to any successful British drama series, you immediately talk about the superior writing (think Downton Abbey), the brilliant acting (think Sherlock) and the visually stunning landscape (think Poldark).

One other element, however, that goes relatively unnoticed but is equally as important in the creation of an overall success is the theme music. It can take the form of an incredible 60s soundtrack (think anything that Richard Curtis does), a hauntingly beautiful soundtrack (think Case Histories with Jason Isaacs) or an original score that defies logic and appears as the perfect complement to the writing, acting and landscape.

Such is the case with the music of All Creatures Great and Small, which is currently airing Sunday nights on PBS as part of the Masterpiece series. The folks over at Masterpiece recently caught up with Alexandra Harwood, ACGSseries composer, to talk about the creation of and the process that goes into creating what is, hopefully, an award-winning score. The full interview is reprinted here courtesy of PBS Masterpiece.

MASTERPIECE: Did you have any experience with All Creatures Great and Small—the original series or the books—before you took on the composing work?

ALEXANDRA HARWOOD: The original series was very much a part of my childhood in the ’70s, and I absolutely remember watching it as a family, though I’d forgotten about the show for many years. And then, not long before my agent phoned me about scoring the show, before I knew anything about the new show at all, our family vet of 15 years left his practice, which was quite sad because he’s a fantastic vet.

Three months later, he emailed, asking me out for a drink. I was excited, but unsure if he was actually asking me on a date. We had a really nice time, but I still didn’t know [if it was to be romantic]. Next, my dog was a little bit ill, so I got in touch with him. Over a cup of tea, I asked him what his new vet life was like. He said, “Well, I trained at Liverpool and they threw us out into the fields, a bit like that old TV series All Creatures Great and Small.” And I went, “Oh god, yeah, I remember that.” I hadn’t thought of it for 30, 40 years. We talked about that, and two days later, my agent phoned, saying, “Would you like to pitch for a series they’re making of All Creatures Great and Small?” What were the odds of that?! We had six more dates and we’ve been together ever since.

So the amazing thing for me was that I was newly dating a vet and living vicariously through his stories every day, but I was also writing music to this world of vets. It was so bizarre, and it still is bizarre, because I’m still with him, and I’m still working on the show.

MASTERPIECE: What was your process for scoring the titles theme music and Season 1?

ALEXANDRA HARWOOD: When I got the job, they had already shot all of Season 1 (unlike with Season 2, which I scored as they were filming it), so they invited me up to see the Dales, where I’d never been. The Yorkshire Dales has this extraordinary feel, and for me, while it’s extraordinarily beautiful, the land is also actually quite harsh.

It’s got this incredible light and shade, a little bit like the drama itself, even in the winter or summer. It’s a very vast expanse, and it’s striking, the Dales, not like anywhere else. I’m so glad I got to see it, and it was really important for me, because I don’t think I could have got a feeling for the show without feeling the Dales. I think the Dales is a central character to the show, it is the heart and soul of this drama, really, and the people and everything about it.

MASTERPIECE: After your trip to the Dales, what happened next?

ALEXANDRA HARWOOD: When I came back from the Dales, the first thing I had to do was the title music. The first two months were spent on the theme alone. It was important, obviously, to get title music right, but because of the original series’ iconic theme tune, what everybody agreed—and when I say “everybody,” I mean the producers, directors, all the creatives—was that this show is completely different to the original series, and we wanted to make sure everybody understood that this was not a remake of the original series; it was a remake of the books. And even though people will still compare the series, we just thought, well, this has its own identity, so we wanted a new theme tune, as much as it had new actors and new everything.

So the instructions were to write a theme that made the audience feel like they were in a nice warm bath, comfortable, and to know where they were at the beginning of every show—to feel that they’ve come home to the Dales, to the countryside. I tried a few ideas, maybe two or three that didn’t quite sit, and they were like “yes, yes, but no, no.” And then I was out walking my golden retriever, Brinkley, and in popped this theme, the theme. It was just going through my head, so I got my phone out and I sang in it because I didn’t want to forget it. I kept on singing it, to go “Can I remember it?”, because people wanted a memorable theme.

I got home, quickly put it down on piano, and sent it to them, and they all said “Oh yes, we like this.” They all wanted to sit on it for a few days also, like “Can we remember it?” That went on a few days, and then everybody was happy. And really from then, the rest of the series grew.

Now I had the theme to draw on and pull motifs from, particularly for James. I really identified the Dales with James, and I felt like James and the main theme, the Dales, are kind of one in the same. That helped me because James has a kind of lightness to him, and he’s innocent. Even though there are cool shades in his character, there’s a lovely freshness to him. But in the end, the story dictated what I needed to write.

Often in Hollywood, composers might score a suite of ideas based on the characters that they’ve either seen or read in the script, and then they’ll draw from that suite for scoring the whole film or series. But it’s the drama that tells me what to write. It’s not like I go, “Okay, here’s so-and-so’s theme, and put it on them. I personally find it easier to score having watched the characters. I really like scoring somebody on screen because I pull from that performance. And so for me, the themes evolved depending on who I was scoring as it went.

The beginning of Episode 1 [Season 1] was so different to the rest of the series because it was a prologue and it was introducing James in Glasgow—it wasn’t even our world yet. But the moment we got into the Dales and then there is that theme, suddenly I was in the world, and each character got their own themes.

MASTERPIECE: Can you describe any details about different characters’ themes?

ALEXANDRA HARWOOD: In Season 1, Tristan was a kind of caddish guy, he was larking about, so he had this little clarinet thing and pizzicato strings, and nearly every single time he was on screen, that would suit him, because there was not much more that he did than be the opposite of everybody else.

In Season 2, that isn’t the case, so his theme is there a little bit, but he ended up getting variations of it, without the joke of it. And each character has kind of developed that way. Siegfried has the bassoon, and I think the more his character develops, it’s likely that I might use the bassoon, but it might not be so much like a caricature. I did Mrs. Hall with the “home” theme; they have the same theme, because I feel that she is home. Jenny, the young Alderson daughter, has the flute, and Helen and James have their own “love” theme, but there’s also a kind of country theme for Helen, which has the oboe. So each of them might have a little bit of an instrument, but I’m not doing it as kind of painting by colors; it’s definitely more planned with the story.

MASTERPIECE: Did you have any favorite moments to score during Season 2?

ALEXANDRA HARWOOD: Your viewers don’t need to know who it is, but I really loved scoring a kiss. In fact, when I do a recording session, there’s always a cover page to the printouts of scores and parts, listing the names of all the cues that are going to be recorded. And I had put a photo of the list of cues on Twitter—one was called “The Funeral,” one was called “The Kiss,” and the fans went a little bit crazy speculating, Oh, who’s going to kiss? Who’s dying?

MASTERPIECE: On your Instagram, there’s a short video of the orchestra recording the title theme. It led me to wonder if you were hindered during COVID-19, or if there was any special protocol for recording Season 2?

ALEXANDRA HARWOOD: It’s been quite a journey, actually. I started Season 1 as lockdown began, so we couldn’t record; it was all me on samples. Sample libraries are on hard drives, and you can pull any instrument, any articulation, and play them—it’s like playing the violins, the clarinet, everything; I can play in the orchestra. So for episodes one and two, in season one, I was able to record one clarinet—they played alone—and then I recorded one pianist for the title music. That was it. And then the rest I just did by samples. For Season 2, we were able to record a new arrangement with an orchestra for the title music and credits. So between that live recording session and another, we had music for use throughout the series.

MASTERPIECE: Aside from the new arrangement of the titles, are there any new kinds of musical features we can look forward to hearing?

ALEXANDRA HARWOOD: For the Christmas special (Episode 7) of Season 1, I did special title music for Christmas, like putting bells over the normal theme tune. I did a new arrangement of it for Season 2, and they’ve done a Christmas titles sequence, with snow all over it. It’s so beautiful.

All Creatures Great and Small continues Sundays at 9pET/8pCT on PBS Masterpiece.