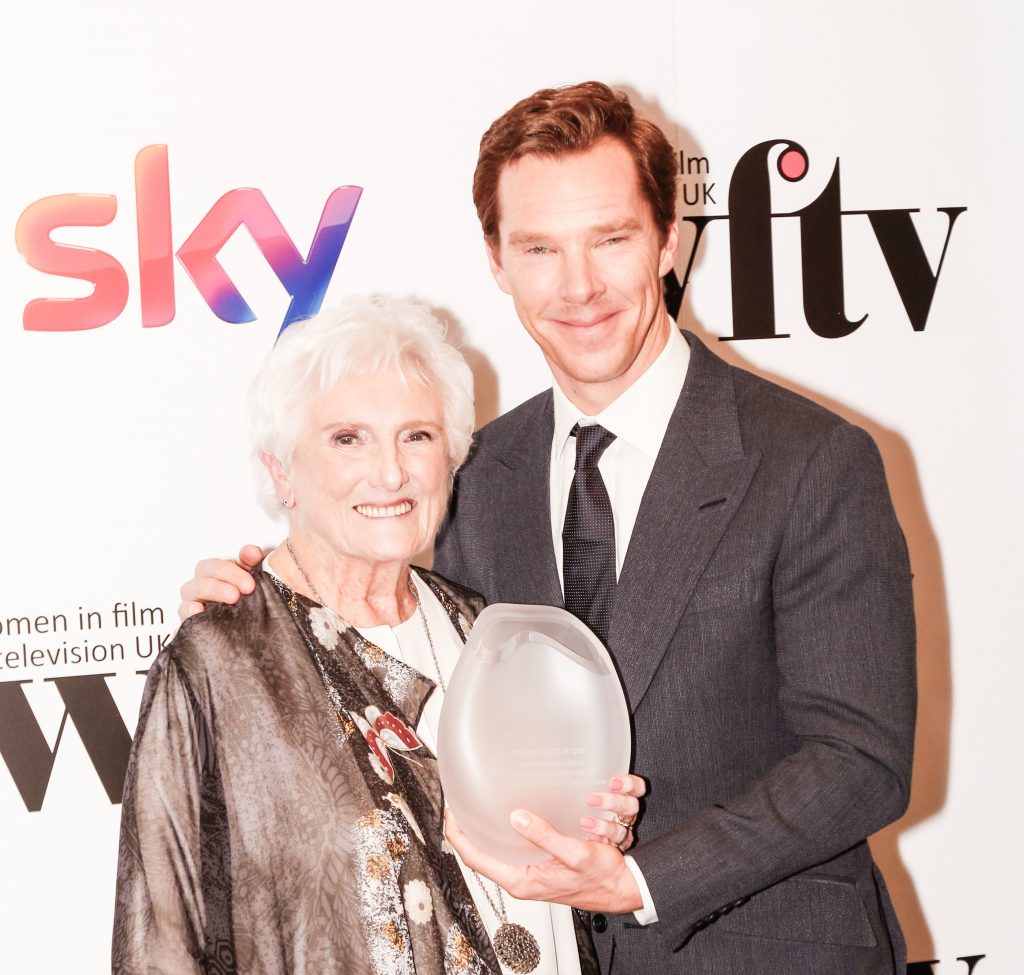 London, December 2, 2016. Beryl Vertue and Benedict Cumberbatch with her award at Sky Women in Film and TV Awards 2016 in London Hilton.

Hartswood Films founder, Beryl Vertue, passed away Saturday at the age of 90. While her name might not be top-of-mind, her legendary career work in British comedy and drama will live on for generations around the world.

“It’s with the heaviest of hearts that we have to share the sad news that mum/Beryl passed away peacefully last night,” her daughters and Hartswood Films co-producers Sue and Debbie said in a statement. “It wasn’t Covid, it was just her nearly 91-year-old body saying enough is enough.”

Nicknamed “Sherlock’s godmother” by the show’s star Benedict Cumberbatch, who presented her with a lifetime achievement award at the 2016 Women in Film and Television awards, Vertue began her career as a typist, writing up scripts for Steptoe And Son scribes Ray Galton and Alan Simpson, before becoming an agent for comedians such as Frankie Howerd and Dalek creator, Terry Nation.

In 1979, Vertue founded Hartswood Films but it took a few years for the company to get off the ground. “I began to lose confidence,” she recalled in a 2016 interview. “I thought: I can’t do it. Then I happened to see a piece of paper on a desk – God must’ve put it there or somebody – some blurb from a publisher, and there was this book ‘Men Behaving Badly.’ I thought I’ll send off for that, it’s a funny title, it might be a film … I read the book and then thought it’s a TV series, that’s how it began.”

Tributes from what reads like a who’s who in British television began to immediately pour in upon hearing the news. From Dawn French to Amanda Abbington to Rob Brydon to Sherlock co-creator, Mark Gatiss, all described a friend, a mentor, an adviser, a powerhouse, an inspiration, a role model who adored both her career and her family.

Beryl Vertue. What a life. An extraordinary legacy. From Goons to Rag & Bone Men, Daleks to Consulting Detectives. She saw it all and did most of it. But foremost – a wonderful woman, a loyal colleague and an absolute scream. She was loved. ❤️

Vertue’s daughters and Hartswood Films co-producers Sue and Debbie brilliantly summed up their mum and their boss saying, “She loved a glass of wine at lunchtime, she loved asking the common sense question, she was often the last person at a party, she didn’t suffer fools, she was fair, she was kind, she was fun, she was stubborn, in fact she was the total package and we will miss her beyond words.”

Personally, having had the opportunity to cross paths with her briefly on several occasions over the years, this 2013 appearance as a guest on BBC Radio 4’s Desert Island Discs summed up this amazing individual in my book . Her musical choices were Elton John’s “Pinball Wizard”, Giacomo Puccini’s “Nessun Dorma” Glenn Miller’s “Moonlight Serenade”, the Bee Gees’s “Morning of my Life”, the Broadway cast of A Chorus Line performing “Finale”, Elaine Paige’s “Don’t Cry for Me Argentina” from Evita, the London Session Orchestra performance of “SHERlocked” from the Sherlock TV series soundtrack, and Louis Armstrong’s performance of “What a Wonderful World”

R.I.P. Beryl Vertue. You will be missed.