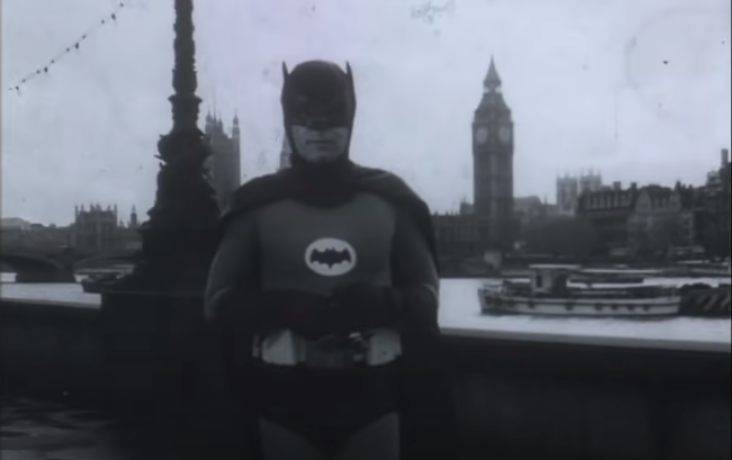 A perfect example of just how awesome the internet can be shows itself in this thought-to-be-lost video of Adam West’s Batman teaching road safety to London school children. In this May 1967 advert, the Caped Crusader is shown teaching the Green Cross Code to youngsters on London’s streets.

For those not familiar with this, it’s a brand created by the National Road Safety Committee, which is now the Royal Society for the Prevention of Accidents or RoSPA, to raise awareness of pedestrian road safety in the United Kingdom.

Kaleidoscope, which specializes in finding missing television footage and who coordinates ITV’s Raiders of the Lost Archives campaign, discovered the clip several years ago as they kicked off a nationwide hunt as they compiled their list of the UK’s top 100 missing TV shows gems.

With over 750,000 items in the archive, the Birmingham based company regularly calls on home viewers to come forward with any recordings and video tapes which may have spent decades hidden away in lofts but could contain precious “lost” material.

As you can imagine, the usual suspects topping the find list are program episodes of Doctor Who, Top of the Pops and The Avengers with the most prized missing material being early episodes of Doctor Who featuring Mark Eden as Marco Polo, a Hancock’s Half Hour episode, Lady Chatterly’s Revenge from 1957 and a Dad’s Army episode – The Loneliness of the Long Distance Walker, first screened in 1969. Other finds included three editions of Til Death Us Do Part, starring Warren Mitchell, which later became All in the Family in the U.S.

One of Kaleidoscope’s greatest finds from 2016 was The Avengers – Tunnel of Fear episode, which was released on home DVD several years back after being missing for over 55 years. That said, you have to admit, Batman teaching road safety to London school kids is a pretty brilliant find.

So, wherever you are, kids, make sure you pay close attention to The Green Cross Code when making your way to the Bat Cave!