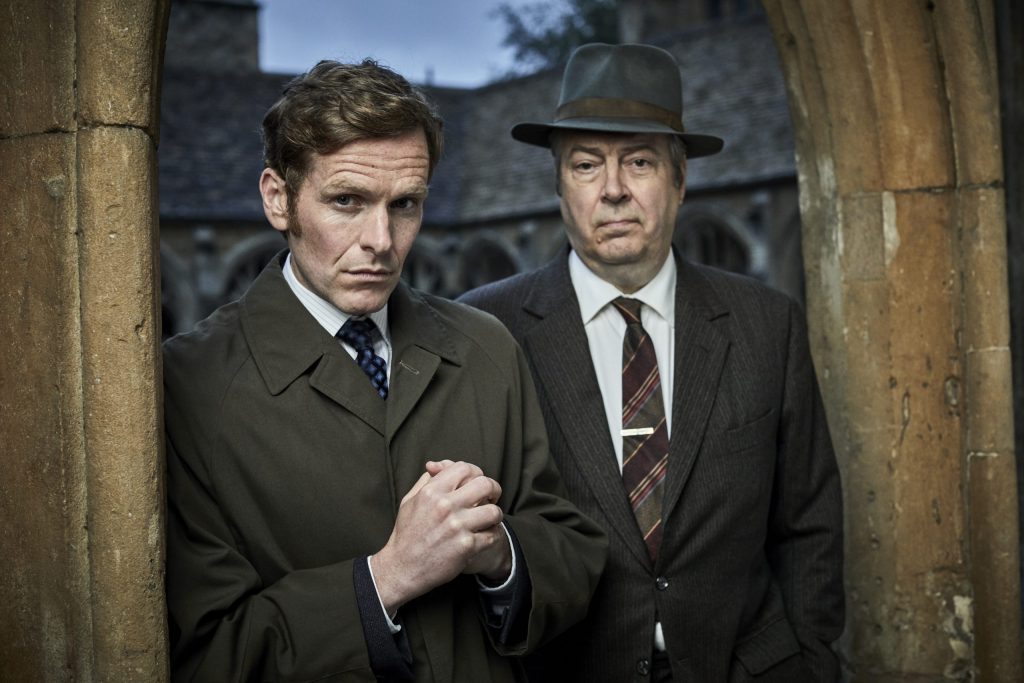 Endeavour, the series which began as a single film a decade ago in 2012 to celebrate the 25th anniversary of Inspector Morse, will end its run after 33 episodes across nine seasons according to a special video statement from series producers Mammoth Screen and PBS Masterpiece. Season 8 will air in the U.S. on PBS Masterpiece between June 19 and July 3, followed by three more episodes for Season 9 which is currently filming in Oxford and will air in 2023.

For series 8, Shaun Evans will reprise his role as DS Endeavour Morse, alongside Roger Allam as DCI Fred Thursday for three new stellar cases set in 1971 Oxford, England when series 8 of Endeavour returns to Masterpiece Mystery on PBS beginning Sunday, June 19, 2022 at 9/8c.

Due in large part to an overall production shutdown for the coronavirus pandemic, it’s been almost a full two years since the last series of Endeavour aired so, chances are, you might not remember that, in series 7’s final episode, tensions between the two detectives reached the boiling point with long-unspoken resentments – Endeavour’s superiority complex, Fred’s more old-fashioned policing techniques – were finally aired. Standing over a corpse, the pair hurled insults at each other until the usually well-mannered pathologist Dr Max DeBryn had to break them up.

Remember, it was Endeavour who vowed to transfer to another police department as he continued to follow leads regarding the freak accidents – which led to him and DS Jim Strange accidentally discovering and apprehending the towpath killer, who turned out to be the same man whom Fred had suspected all along, despite Endeavour’s doubts.

A more contrite Endeavour headed off to Venice, after finally working out that the deadly freak accidents were being caused by his new friend, Ludo (whose wife, Violetta, Endeavour was having an affair with). There was a final moonlit showdown, in which Fred turned up just in the nick of time – before Violetta took a bullet for Endeavour, and he was last seen cradling her as she died.

Season 8 will open in 1971, with the new episodes reuniting the full Endeavour cast, including Anton Lesser (Game of Thrones) as CS Reginald Bright, Sean Rigby (Gunpowder) as DS Jim Strange, and James Bradshaw (Close to The Enemy) as Dr Max DeBryn.

Series 8, Episode 1, “Striker” has the Irish Republican Army (IRA) making a threat against the life of the Oxford Wanderers’ star striker and Endeavour is tasked with the duty of acting bodyguard. Episode 2, “Scherzo”, begins with a cab driver found dead in his taxi, owing a large debt to a colleague while episode 3, “Terminus”, a passenger is killed shortly after leaving a bus. Morse was also on the bus but was in a drunken stupor. He catches the bus again but it becomes trapped in a snowdrift. We’ll leave this one right here as this is where it gets really good….

Damien Timmer, who runs producer Mammoth Screen and exec produces the series, put things into perspective with these thoughts. “Endeavour has been a real labour of love for all of us, and we salute Russell Lewis for his extraordinary achievement in chronicling Endeavour Morse’s coming of age across 72 hours of TV. Russell always knew where he wanted the series to end, and that Remorseful Day is nearly upon us.

We’d like to thank Shaun and Roger and all the other members of the Endeavour family on and off screen, and the show’s fans both in the U.K. and abroad. Russell has many surprises up his sleeve for the final three films, with the return of some familiar faces and new challenges for Endeavour and Thursday to face before the final goodbye.”

There….you are now ready for June 19 and the return of Endeavour S8 on Sunday, June 19 on PBS! And, at least, we have the knowledge that there will be a series 9 even though it will be the last. Cheers!