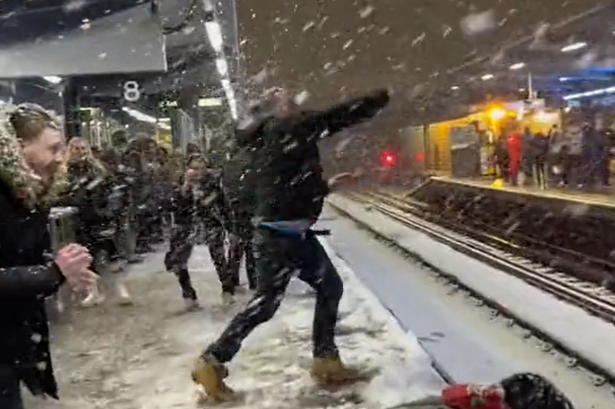 Snowball fight while waiting for a train. Photo: MyLondon

While snow this time of year is an extraordinarily magical thing, especially in London, it can wreak havoc on commuters trying to get from one place to the next. As you can imagine, the London Underground is no exception.

Morning and evening rush hour travellers in London can be a bit moody especially when countless trains go by packed to the rafters leaving many having to wait for the next train hoping upon hope that there will be a small space to squeeze into before the door closes and someone yells ‘mind the gap’.

Making the best of the situation, passengers at West Ham station found a novel way to pass the time by having a snowball fight from opposite sides of the track. In what looked like a scene from a primary school dodgeball game as snow continued to fall and commuters didn’t hold back as they threw their snowballs at their targets across the tracks.

Delays on the Transport for London (TfL) network may have been disrupting commutes this particular morning leaving many passengers frustrated on their journey into work but for those in this one East London station, the snow seems to have unleashed their inner child for at least one brief moment.